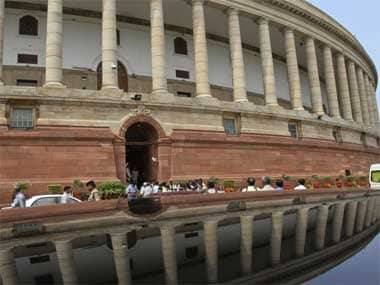 Dubbing passage of the GST Constitution Amendment Bill as historic, Finance Minister Arun Jaitley on Wednesday said that manufacturing taxes and VAT will come down with the new national sales tax but the same for services tax will be decided by states and Centre. The Goods and Services Tax (GST), which will subsume over a dozen central and state levies including excise duty, service tax and VAT, is "perhaps the most important" tax reform, he said soon after Rajya Sabha overwhelmingly voted for the legislation.

"Today is a historic day for the reason that Rajya Sabha has passed the GST bill which have been held up for a very long time. All members present at the time of voting, voted in favour of the bill," Jaitley told reporters in Parliament House.

Thanking Congress and other opposition parties for supporting the legislation, he said proceedings in the Upper House demonstrated to the world that this is a great day for Indian democracy and Indian federalism. "In fact Indian democracy and Indian federalism are at there very best in as much as all national political parties and regional parties, state governments have come together to usher a major taxation reform.. The government wanted to build a larger consensus, which we succeeded in doing," he said.

Asked if the implementation of the GST would mean rise in cost of air travel, mobile bills and eating out because of incidence of service tax going up in the new regime, he said that tax rate would be decided by the GST Council, comprising of the Centre and the states.

"Manufacturing taxes will certainly will come down, VAT will come down. What level services taxes are to be kept is a discretion of GST Council. It will depend on what states along with Centre will decide," he later told Times Now. On Congress demand for not converting the supporting GST legislation as Money Bill, Finance Minister said he has not pre-decided on bringing the Bills as Money or Finance Bills.

"Once the GST is implemented, it will bring basic changes as far as the Indian tax structure is concerned, it will converge India into one unified market, with one unified tax in the country, it will improve the base of taxation, it will make evasion extremely difficult.

"The central and state governments have to work together to make this a great success. Overall, I think we had an excellent debate," he told reporters.

He said although every state government is on board in order to implement one of the most important taxation reform in India, the fact is that it has been passed unanimously all regional and national parties have actively supported it.

Congress hoped that subsequent legislations for its implementation like CGST and IGST bills would be brought in the Winter Session as financial and not money bills. Former Finance Minister and senior Congress leader P Chidambaram said he was only half satisfied with the Finance Minister's promise made in the Upper House in this regard.

"It's a half promise. Therefore, I am half satisfied," he told reporters after the passage of the Constitution Amendment Bill. Chidambaram said Finance Minister Arun Jaitley has assured that he will hold discussions with the Congress party before bringing the bills. Senior Congress leader and former Law Minister Kapil Sibal cited the example of Aadhaar Bill to claim the new legislations could be converted into Money Bills to block voting.

"We have seen the Aadhar Bill was converted into a money bill and we were not given the right to vote on it. We have doubt that this GST bill will also be turned into a money bill whereby a discussion on it will take place in Rajya Sabha but members will not be allowed to vote on it. We are concerned over it," he said. "We hope that it will be a financial bill and there will be a discussion on it and we will be given the right to vote on it," he said.

Another Congress member Renuka Chowdhury said, "They have considered many of our aspects. Have to wait and see what happens in the winter session." NCP leader Praful Patel said it is very good that the Constitution amendment bill to bring GST was passed with general consensus.

"It is good for the country and states will also benefit, especially those which considered themselves as backward as they will get more revenue.

"We hope that the Bill to be brought by government in November will also be passed with general consensus. Finance Minister has given an assurance that whatever bill will be brought, it will be honoured," he said. Earlier in the day, Congress had made it clear to the government that firm assurances for keeping the GST rate capped at 18 per cent and bringing subsequent legislations needed for its rollout as financial bills alone could ensure its support to the long-pending Constitution Amendment bill.

"We also demanded an assurance that the CGST and IGST should not be moved as money bill. The Central GST and Integrated GST are bills which will apply on taxpayers, on common man. They must be debated and voted upon by both Houses of Parliament. We hope to get assurance from the Finance Minister. If these assurances are forthcoming, we will be able to support," Chidambaram told reporters.

The GST Bill will finally be taken up for discussion in the Rajya Sabha.

India Inc had said it is looking forward to introduction of the much-awaited Goods & Services Tax (GST), saying it would be a very significant step in the field of indirect tax reforms in India.

The government has circulated official amendments to the GST bill to drop 1 percent additional tax and include a definite provision in the statute for compensating states for revenue loss for 5 years as it gears up to discuss the long-pending bill in Rajya Sabha.

The eleventh day of Parliament's Monsoon Session on Monday began with AIADMK Rajya Sabha member Sasikala Pushpa's statement where she said that she was facing a "life threat" and was being "compelled to resign". Sasikala, who hit the headlines for slapping DMK leader Tiruchi Siva at the airport on Saturday, said: "I am receiving an unconditional apology from Tiruchi Siva. Something was spoken against my party leader and I behaved like that."

The Enforcement of Security Interest and Recovery of Debts Laws Amendment Bill 2016 was moved in the Lok Sabha for consideration and passing.

The government sought parliament's nod for additional spending of Rs 1.03 lakh crore, though the cash outgo will only be Rs 20,948.26 crore.

The Enforcement of Security Interest and Recovery of Debts Laws Amendment Bill 2016 was moved in the Lok Sabha for consideration and passing.

Piloted by Finance Minister Arun Jaitley, the bill seeks to amend four laws — the Securitisation and Reconstruction of Financial Assets and Enforcement of Security Interest Act, 2002; the Recovery of Debts due to Banks and Financial Institutions Act, 1993; the Indian Stamp Act, 1899; and the Depositories Act, 1996.

Unhappy over the Centre's stand on special status to Andhra Pradesh, TDP, a partner in NDA government, staged protests both inside and outside Parliament. Seeking immediate announcement for special status, the MPs of Telugu Desam Party (TDP) tried to disrupt the proceedings in the Lower House.

Holding placards and raising slogans in support of their demands, the TDP members in the Lok Sabha began the protest as soon as the house met for the day. They rushed to the speaker's podium, demanding that the government fulfill its commitments under Andhra Pradesh Reorganisation Act.

Speaker Sumitra Mahajan repeatedly appealed to members to return to their seats but they continued the protest. The Speaker conducted the proceedings amid the uproar before adjourning the proceedings till 2 pm.

• Attack on Dalits and Muslims

Opposition members expressed concern over growing attacks on Dalits and minorities and called for stern action against cow vigilante groups which have been targeting them.

Raising the issue during Zero Hour, Trinamool Congress leader Sudip Bandopadhyay underlined the need for action against those targeting the Dalits and Muslims to uphold secularism and communal harmony.

The government has listed the GST bill for discussion in the Rajya Sabha on Wednesday, hoping it will be passed through consensus, but the opposition Congress said that consultation is still on over the issue and an agreement is not yet finalised.

In view of the development, the BJP has issued whip for all its Rajya Sabha members to be present in the house for the next three days.

"The GST bill is listed for Wednesday. We hope it will be passed through consensus," Parliamentary Affairs Minister Ananth Kumar said.

The bills provide for a Constitutional status to the 'National Eligibility-cum-Entrance Test (NEET) and seek to amend the Indian Medical Council Act, 1956, and the Dentists Act, 1948.

Responding to a debate on the bills in the Rajya Sabha, Minister of Health and Family Welfare Jagat Prakash Nadda said the whole exercise was aimed to stop multiplicity of examinations, to bring transparency to curb corruption and to stop exploitation of students.

Rajya Sabha witnessed a brief uproar by opposition members over alleged remarks by Manohar Parrikar against actor Aamir Khan even as the Defence Minister denied having said what was been quoted to him.

During the Zero Hour, Derek O'Brien (TMC) raised the issue of "dangerous" rise in religious fundamentalism in the country, saying the government, ministers and people associated with the ruling party were "shooting their mouths off every day".

"The Prime Minister needs to come and say these are in fact mistakes, this is not thinking of the government. Prime Minister come here and assure us that we can live in the India we know — Unity in Diversity".

As soon as he finished his Zero Hour mention, Leader of Opposition and senior Congress leader Ghulam Nabi Azad quoted a report which said 'Parrikar takes a swipe at actor Aamir; those who speak like this must be taught a lesson'.

To this, Parrikar said: "I would only say one thing. Let the members see the video...and make up their mind". However, this did not pacify the agitated opposition.