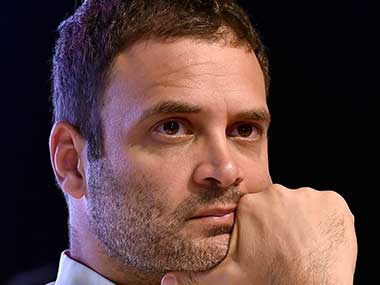 "It is because he belongs to the RSS and the BJP and they can indulge in corruption," he said wryly.

The Panama Papers are leaked documents of about 1.15 crore files containing details of about 2.15 lakh bank accounts.

Gandhi, on a two-day tour to the state, accused Prime Minister Narendra Modi of overlooking the corruption of the BJP chief ministers.

He was addressing a rally in Markel, a tribal village near here in Bastar district. The rally was organised to oppose the proposed disinvestment of the NMDC's steel plant in Nagarnar area. The plant in Markel is under construction.

"For the first time in the country, I have seen that a steel plant, which is still being set up, is being privatised. People from the RSS and the BJP don't want development of tribals," he alleged.

"They want you to become slaves of rich people in big cities," claimed the 47-year-old Amethi MP, addressing the gathering which mostly comprised adivasis.

Gandhi alleged that land and forests belonging to tribals are being snatched and given to industrialists.

In 2004, Tata Steel proposed to set up a plant in Bastar for which people gave their land but later the company scrapped its plan. The acquired land was not given back to owners, the Congress leader alleged.