NDA govt will render justice to victims of anti-Sikh riots

Gurdaspur: Punjab Deputy Chief Minister Sukhbir Singh Badal today said the Union government has promised that it will extend all legal measures to ensure justice to the victims of the 1984 anti-Sikh riots.

Reiterating the resolve of Shiromani Akali Dal to get justice for innocent victims of the riots, he said the time has come to ensure punishment to the perpetrators.

Talking to reporters after presiding over a Jor Mela at Baba Bhoorewale Dera in Gurdaspur, Sukhbir, who is also the SAD president, said a party delegation under the leadership of Union Minister Harsimrat Kaur Badal had taken up the issue before the NDA government at the Centre. 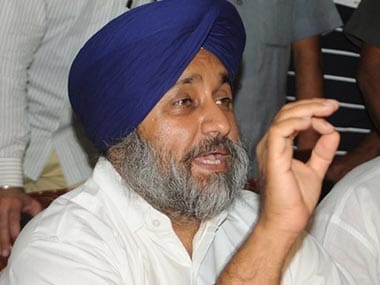 He said the Union government has assured the delegation that justice would be provided to the affected people.

He said the SAD delegation has requested the Centre to set up a Special Investigation Team (SIT) led by a Supreme Court judge and a special court for hearing the cases on a daily basis.

To a query regarding any differences within the ruling combine in the state, he said there was no difference of opinion between SAD and BJP. "We are working together at all issues. Our alliance and relation is indivisible," he said.

On the issue of unending bickering within Congress party, he said the Congress leadership in the state has given a slogan that "Bajwa Bhagao, Congress Bachao" (Remove Bajwa, Save Congress) but there was a dire need of "Congress Bhagao, Punjab Bachao" (throw away Congress to save Punjab).

When asked about the strategy of SAD to expand its wings in other states, he said SAD has registered its existence in Haryana and New Delhi, and Uttar Pradesh was its next target.

He said his party would field its candidates from seats having dense Sikh population in Uttar Pradesh in next elections. "SAD is one of the oldest party in the country. We will expand its ambit to some other states since the people of country have come to know the development vision of Punjab Chief Minister Parkash Singh Badal," he said.