A request in this regard was made to Pawar at the NCP's core committee meeting held here and attended by its key leaders, including Maharashtra unit chief Jayant Patil, the sources said. 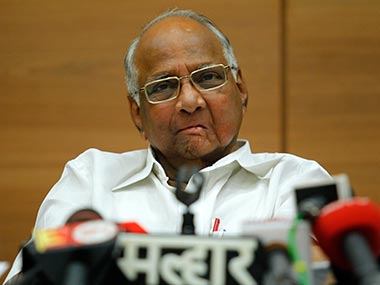 They also maintained that Pawar, a Rajya Sabha member since 2014, has not categorically declined the request.

The bypoll has been necessitated after the sitting NCP MP from the Western Maharashtra seat, Udayanraje Bhosale, jumped the ship and joined the ruling BJP earlier this month.

Bhosale on Tuesday said he respects Pawar and will not contest the by-election in case the veteran leader throws his hat in the ring.

"All leaders and workers (in Satara) have demanded that Pawar saheb contest the by-election. The NCP enjoys a strong presence in the district and is sure of victory. Saheb has not categorically said 'no' to the request," the sources added.

Seven-time Lok Sabha member Pawar (78) last contested the parliamentary polls in 2009. The Baramati baron did not fight the 2014 and 2019 general elections.

The NCP currently has four Lok Sabha MPs, three of them from Maharashtra.