A month ago, Gujarat Chief Minister Narendra Modi was campaigning in a very conventional style– via a yatra named after spiritual icon Swami Vivekananda.

That phase is over now. As the December polls edge closer, the tech-savvy Gujarat Chief Minister is all set to change gears and unleash a hi-fi virtual audio-visual campaign.  He will be speaking in four places at the same time! Magic? Nope. 3D imaging!

According to a report in Business Line, the phenomenon will require the setting up of a special type of stage, on to which a 3-D image of the chief minister will be projected. The report adds that the crowds will be able to view a three dimensional Modi as if he was speaking in to them person, even without using special glasses.

His message will thus be seen simultaneously in several places, reported Firstpost. 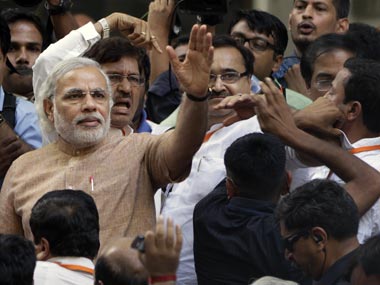 The mega blitzkrieg starts from the evening hours of 18 November from four cities – Ahmedabad, Vadodara, Rajkot and Surat.

Talking to media about the new strategy ahead of the Gujarat elections, BJP leader Arun Jaitley said, "This technology is being utilized first time for elections campaign in Gujarat. The audience will have a feel that he (Modi) is addressing right from there in all four cities. We will also organise such virtual campaigns in other cities of the state later," said Jaitley.

Other cities, towns and constituencies would also be covered subsequently in a phased manner.

The announcement of the 'hi-tech' campaign came at a BJP-hosted get-together for the media in Ahmedabad to mark the Gujarati New Year that began on 14 November.

The campaign theme, to be executed through light and sound, will largely be played out in the evening hours, and run up to 10 pm. The remaining 78 constituencies will witness the time-tested style of physical campaigning with public meetings and speeches.

By using high-tech, multi-centre, audio-visual techniques, Modi is seeking to perpetuate his support base with youth who constitute over one-fourth of total voters. About one crore Gujaratis out of a total of 3.79 crore voters in the state belong to the age group of 18-29.