Narendra Modi's Hunkar rally: Not about Bihar but Nitish

Patna: It was supposed to be a rally to promote the cause of Bihar, demand special category status for the state to be more specific, it threatens to end up as a Narendra Modi promotion rally instead.

As Patna readies for the big rally on Sunday, Bihar is nowhere visible. Modi is everywhere – Modi T-shirts, Modi tea-stalls, Modi jalebis, Modi banners and Modi cycle rallies and what not. The state unit of the party appears to have lost focus of the original purpose.

When the Hunkar rally was planned by the party earlier this year, the objective was to draw attention to the discrimination against the state by the centre. The BJP was still part of the Nitish Kumar-led NDA government at the time, but the equation between the coalition partners was fast reaching the breakpoint.

It was supposed to be a strong response to Nitish’s much-publicised ‘Adhikar’ rally held in November last year - it sought to create strong public opinion in favour of the government’s demand for special category status to Bihar. Noticing that the JD(U) had virtually walked away with an issue of immense political value, the BJP planned its own rally. 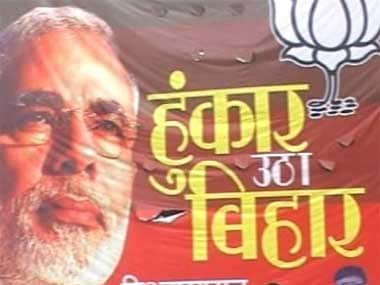 The purpose of the announcement of rally was to convey to the masses that the BJP is as serious and sensitive towards the development of Bihar as the JD(U). However, the original purpose quickly shifted to the backburner after the 17-year-old alliance ended on a bitter note over the issue of the acceptability of Modi as the NDA’s prime ministerial candidate.

Nitish had questioned the secular credentials of the latter and demanded that the BJP’s central leadership make its stand clear. The local leaders have been busy targeting Nitish personally ever since the split instead of talking about the state. The lack of focus has been visible in the run-up to the rally.

The BJP has not told people yet what Bihar would gain by way of this high publicity rally, its leaders are simply busy chanting the NaMo (Narendra Modi) mantra. The talking point is the leadership quality of Modi and his rise as a political colossus from being a small tea vendor at a railway platform.

Besides this, the massive publicity campaign in the run-up to the rally has also concentrated on painting Nitish a “traitor” who stabbed his trusted friend in the back. It has been highlighting that the BJP gave Nitish political asylum when he was battling for survival after parting ways with Lalu Prasad’s Janata Dal in the late 90s and was happy to hand over power to him in Bihar after the defeat of the RJD in November 2005 assembly polls.

The party’s rally is actually aimed at ‘insulting’ Nitish, said a party leader. When the JD(U)-BJP alliance was in power, Nitish made it a point not to allow Modi in Bihar. He refused to accept funds for flood relief operations from the Gujarat government and had even made a public show of displeasure for being shown on the same poster as the Gujarat chief minister.

The state unit of the BJP now wants to give it back. For a man who disliked Modi so much, Nitish now has to confront his presence everywhere. The streets are chock-a-block littered with the posters of the former and the Modi merchandise is just everywhere.

Senior leaders are more sober in their reaction though.

"Narendra Modi is a symbol of development and good governance, and his Patna rally will be a historic one," said former Union minister Ravishankar Prasad. Others say the rally would be about Bihar, nothing else. However, the mood in the party’s lower rungs suggests otherwise.

The JD(U) is pretending not to be worried though.

He added that the BJP had moved on the path of its self-destruction and no one could save it.

"It’s bound to be finished," he predicted.

Curiously, Nitish has gone silent over the Modi rally and it’s mainly his party colleagues who have been attacking the BJP’s PM candidate. On 27 October, the day of the rally, Nitish won’t be in Patna, he would be in his home district Nalanda to attend his party’s two-day Chintan Shivir beginning 28 October.