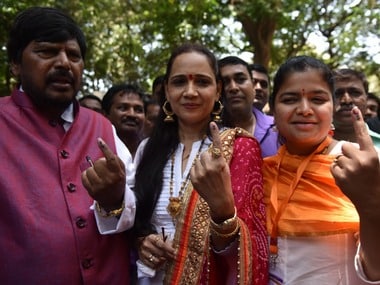 Mumbai records an average of 30 percent voter turnout till 3 pm. Anand Mahindra, chairman of the Mahindra Group, caste his vote in Malabar Hill. He said, "We all have been infected by the virus of progress and growth. Even if a coalition government comes, it should work towards progress and growth of the country."

Nationalist Congress Party (NCP) chief Sharad Pawar cast his vote in the Mumbai South constituency on Monday. NCP has allied with the Congress in Maharashtra.

Union minister and BJP leader Piyush Goyal cast his vote at the Walsingham School, Malabar Hill in Mumbai. After casting his vote, he said, "This election is now a tsunami election. In the North, South, East, and West, the Modi wave has overtaken the country. Prime Minister Narendra Modi is the tallest leader today in the country."

Actor Amitabh Bachchan cast his vote in Mumbai's Juhu. Several first-time voters are exercising their franchise in the fourth phase of the Lok Sabha election being conducted in Mumbai. Ranjani Narayan, first time voter from Chembur, talks about wanting better infrastructure in her area.

Actor Anupam Kher, who starred in the much-debated biopic on former prime minister Manmohan Singh's life, cast his vote in Mumbai's Juhu on Monday. The six constituencies of Mumbai voted in the fourth phase of the Lok Sabha election.

According to latest Election Commission data, voter turnout has not moved much in the past one hour. Till 11 am, only Lok Sabha constituency to cross the 10 percent mark was Shirur with 10.08 percent.  Among all constituencies in the fray in Maharashtra, Shirur has so far recorded the highest voter turnout.

Several reports said that voting at booth number 162 of Malad West in Mumbai is yet to begin after a glitch in EVM was detected. Meanwhile, Congress' Milind Deora and Urmila Matondkar cast their vote in their respective booths.

Mumbai's most-watched battle is likely to be in Mumbai North, with actor Urmila Matondkar making her political debut by taking on BJP sitting parliamentarian Gopal Shetty. Matondkar, who joined the Congress in March, insists that she is serious about her new career. "I know that when film stars enter politics, they are expected to pull in voters because of their glamour. I would request you to keep such thoughts away when it comes to me," the 45-year-old actor told reporters soon after taking the plunge.

In the fourth phase of the Lok Sabha election, which is being held on 29 April, six constituencies in Mumbai will go to vote.

In these constituencies, namely Mumbai North, Mumbai North-West, Mumbai North-East, Mumbai North-Central, Mumbai South-Central and Mumbai South, the main parties in the fray are the Congress, Bharatiya Janata Party (BJP) and Shiv Sena, with the latter two having formed a coalition. Among the high-profile candidates are Priya Dutt, Poonam Mahajan, Milind Deora and actress Urmila Matondkar.

Over 96 lakh candidates are eligible to vote on Monday. Voting booths will be open between 7 am and 6 pm.

In Mumbai South, Congress is fielding Milind Deora, who will be facing the same rival he did in the 2014 general elections – Shiv Sena’s Arvind Sawant. Sawant, who defeated Deora by over 3.7 lakh votes in the last election, has been fielded from the constituency following the BJP-Shiv Sena coalition in the state. While the Congress has raised the impact of demonetisation and GST on the business pockets of south Mumbai, the BJP-Shiv Sena talked about national security, infrastructure and local issues.

The daughters of two deceased politicians will compete against each other in Mumbai North-Central. While Congress has fielded Priya Dutt, daughter of late Sunil Dutt, Poonam Mahajan, daughter of late Pramod Mahajan, got the BJP ticket. Mahajan had defeated Dutt in the last Lok Sabha polls. The constituency alone has around 18 lakh voters. Rehabilitation of slum-dwellers is one of the pressing issues that has been a part of the campaigns of both these leaders.

Urmila Matondkar’s star appeal has been sought after by the Congress in Mumbai North, where the BJP ticket was given to sitting MP Gopal Shetty. In 2014m Shetty had defeated then Congress candidate Sanjay Nirupam by over 4.4 lakh votes. Rising population, housing, healthcare and transportation remain key issues.