New Delhi: Lok Sabha speaker Sumitra Mahajan on Monday said she was "deeply hurt" over the conduct of Congress MPs in the House and that she had only asked them to raise the lynching issue after Question Hour. 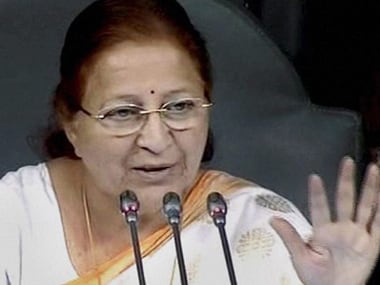 Mahajan's comments came shortly after she suspended six Congress MPs from the House for five days for their "highly unbecoming" conduct during protests over the lynching issue that "undermined the Chair's dignity".

"I am sad and deeply hurt ... and unable to understand why this happened, as I did not prevent them from raising any issue. I told them they can raise the issues they want but only after the Question Hour," she told reporters outside the House.

The speaker said she had told the Congress's leader in the House, Mallikarjun Kharge, that his party can raise the issue but after the Question Hour.

Mahajan said the Question Hour is normally not suspended, according to the rules of the Parliament's Rules Committee which includes members of all parties and that she was only following the rules.

The speaker pointed out that President Pranab Mukherjee in his farewell speech had on Sunday said the proceedings in Parliament should not be disrupted.

Meanwhile, parliamentary affairs minister Ananth Kumar said if any opposition party wants to speak or raise any issue, they should give a notice in advance.