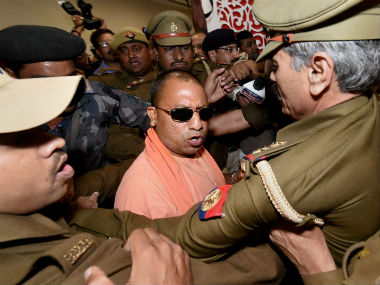 The BJP on Wednesday dubbed the 32-page dossier on cow vigilante lynchings and attacks on Dalits and other issues as a "dossier of disruption" aimed to divide the country on communal lines and disrupt the ongoing monsoon session of Parliament.

A section in the document is headlined: "BJP MP Raghav Lakhanpal and CM Yogi's roles in caste and communal riots in Saharanpur."

Few other sub-heads or "attack points" are: "Tension first started by BJP MP and Yuva Vahini slogans", "Polarisation done by BJP for UP civic polls", "Yogi appointed Superitendent of Police with riot history", "Yogi's promise of law and order is casteist".

The document also talks of "Key issues to be raised in Parliament" -- "Mob Violence and Lynchings: From Akhlaq to Junaid", "Farmers deaths in Madhya Pradesh: Shocking Apathy of Chouhan and Modi Governments", "Cow Vigilantism", and "Indo-China Stand-off in Dokalam".

These are followed by "Inability to address Pakistan Aggressions at the Border", "Goods and Services Tax", "Aadhaar", "MNREGA", "Jobs", "Failures in Education Sector", "Ban of screening of documentary films by I&B Ministry", "Gujarat Government Keeps Zika Cases under Wraps: WHO Report", and others.