Chennai: DMK working president MK Stalin on Wednesday said that Tamil Nadu was the cradle of the Dravidian movement, where there was no place for spiritual politics as enunciated by top star Rajinikanth.

He made the remark just after the top star called on his father and DMK chief M Karunanidhi at his residence in Chennai, days after announcing his entry into politics.

Citing Rajinikanth's assertion of "spiritual politics" Stalin told reporters that Tamil Nadu was the cradle of the Dravidian movement.

"Some are creating an impression that Rajinikanth is to launch a party at the instigation of people who intend to decimate the Dravidian movement in Tamil Nadu."

"Let me tell you this is the land of Periyar Anna (Dravidar Kazhagam founder EV Ramasamy Periyar) and Kalaignar (Karunanidhi)... such efforts in the past have ended in a fiasco."

Asked if Rajinikanth sought DMK support, he said such things could be decided only during elections. 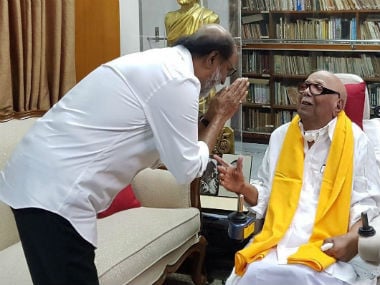 He said "everything needs to be changed" and declared that "spiritual politics" needs to be ushered in, sans shades of any caste or religion with transparency.

Stalin said the top actor calling on Karunanidhi was nothing new and that he had called on the nonaengarian leader some months back to enquire about his health.

Actor Vijayakanth too had called on Karunanidhi and sought his blessings before launching his party, he said.

"Rajinikanth visiting Kalaignar is nothing new...It is no surprise.It was political decency.We gave him a warm welcome."

He said the actor also enquired about the health of his mother Dayalu Ammal.

Just prior to Rajinikanth's meeting with the DMK leader, former union minister and Karunanidhi's elder son MK Alagiri called on his father.

Rajinikanth during his meeting with Karunanidhi, extended his new year greetings to him and apprised the DMK president and his aides of his political plunge. Rajinikanth also enquired about the veteran leader's health.