Srinagar: Former Jammu and Kashmir chief minister Mehbooba Mufti on Thursday said the Kartarpur corridor could be a "new beginning" of reconciliation between India and Pakistan and called for facilitation of bilateral trade and people to people contact to make borders "irrelevant". 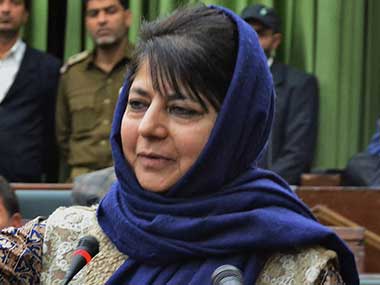 "Kartarpur can be a new beginning of reconciliation between the two neighbours. We cannot change our borders but let us make them irrelevant by facilitating trade & encouraging people to people contact. This will usher in peace & progress for both India & Pakistan," Mufti said in a tweet.

The groundbreaking ceremony for the corridor was held in Kartarpur on Wednesday. The foundation stone for the initiative was laid in Gurdaspur on Monday by Vice President Venkaiah Naidu and Punjab Chief Minister Amarinder Singh.

Mufti criticised media reports claiming that the initiative could facilitate the Khalistan agenda — the demand for a separate Sikh homeland — in India.

"It is quite amusing how some TV channels are trying to distort a gesture like Kartarpur into some kind of conspiracy to create Khalistan. One fails to understand why allowing people pilgrimage to Guru Nanak Dev ji's birth place would assume such undertones," she said.