The Congress will stake its claim to form the next government in Meghalaya later in the day, senior party leader Kamal Nath said, expressing confidence it would succeed in its mission.

He said Congress was in touch all the regional parties in Meghayala in its efforts to form the government.

60: The number of seats by which NPP won in Nongstoin constituency

8181: UDP's Kyrmen Shella won in Khiehrait constituency where BJP workers resigned enmass when Violet Lyngdoh was denied a seat. She went on to contest as NPP candidate and finished third, behind Justine Dkhar (BJP).

Second and only other BJP MLA from Meghalaya, Sanbor Shullai speaks after his win from South Shillong

"I am the only MLA in the state who represents the Cantonment area which has a lot of unutilised land. I will take this up with Centre and get them to allocate these lands from civilians use so we can construct toilets, playground, community halls," BJP's Sanbor Shullai said.

Alexander L Hek has been continually elected as a BJP MLA from Pynthorumkhrah constituency since 1998, the only abberation being in 2013 when he won as a Congress candidate.

Prestone Tynsong (NPP) retains Pynursla by a margin of 2800 votes

Prestone Tynsong photographed with his wife Anjella Kharsyntiew. After the declaration of results, he said he will first visit his constituency to thank the voters. Then he will return to Shillong and sit down with all newly-elected NPP MLAs, and Conrad Sangma, to decide on the party's strategy. "We will know by tomorrow," he said. He declined to comment on whether his name will be put forth for the chief minister's position.

Sniawbhalang Dhar retains the seat, which he won in 2013 as a Congress candidate.

"Meghalaya is heading towards a divided house. We will try to form a government there without Congress," said BJP's Ram Madhav.

Chief Minister Mukul Sangma of the Congress has secured his victory from Songsak constituency, while Cherak Momin of Congress has won from Kharkutta.

Neck and neck competition in Nartiang

There's a tight competition in Nartiang constituency of Meghalaya, where Jopthiaw Lyngdoh of the Congress is trailing but only by 100 votes. Sniawbhalang Dhar of the NPP currently leads with 11608 votes.

Congress has rushed senior leaders Ahmed Patel, Kamal Nath and Mukul Wasnik to Meghalaya in order to reinforce the possibility of forming a government in the state. The Congress is ahead in 23 seats, NPP in 14, BJP in five, while other candidates are ahead in 17 seats.

Once bitten, twice shy Congress clearly doesn't want a repeat of Goa when it was apparently found sleeping at the wheels despite being in the driver's seat, allowing BJP to snatch a coalition right under its nose. Rahul Gandhi's alertness though won't be able to save the larger picture for Congress where it seems to have been replaced by BJP as the pan-India national party in once-bastion North East.

We will form a non-Congress government in Meghalaya: Kiren Rijiju

"We will succeed in forming a non-Congress government in Meghalaya," said Minister of State (Home) Kiren Rijiju. "In the North East alliance, BJP, UDP and NPP are together."

Two hours into counting, here's how the trajectory of leads and wins looks so far

Meghalaya BJP chief Shibun Lyngdoh: We expect a total of 7 to 10 seats for the BJP in Meghalaya, the early trends are satisfactory. The Congress seems ahead right now but that will change soon. As for a post-poll alliance with the NPP, it is definitely a possibility.

Conrad Sangma confident NPP will have an edge over Congress

NPP chief and Tura MP Conrad Sangma said the early trends look good. "I think we will have an edge over the Congress by the time the leads are clearer. The issue of a post-poll alliance with BJP will come up later; we will soon find out what options we can resort to," Sangma said.

Congress leading in 13 seats now, UDP+ in 7, BJP still leading only in 1

NPP is leading in 4 seats.

Counting of votes for all 60 seats begins

According to the exit poll, Congress will clinch 36.5 percent of the vote, followed by NPP with 29.4 percent. Despite its heavy campaigning, BJP only managed 16.6 percent vote share, while the UDP- HSPDP coalition had an 8.8 percent share and Others clinched 8.7 percent of the vote share. 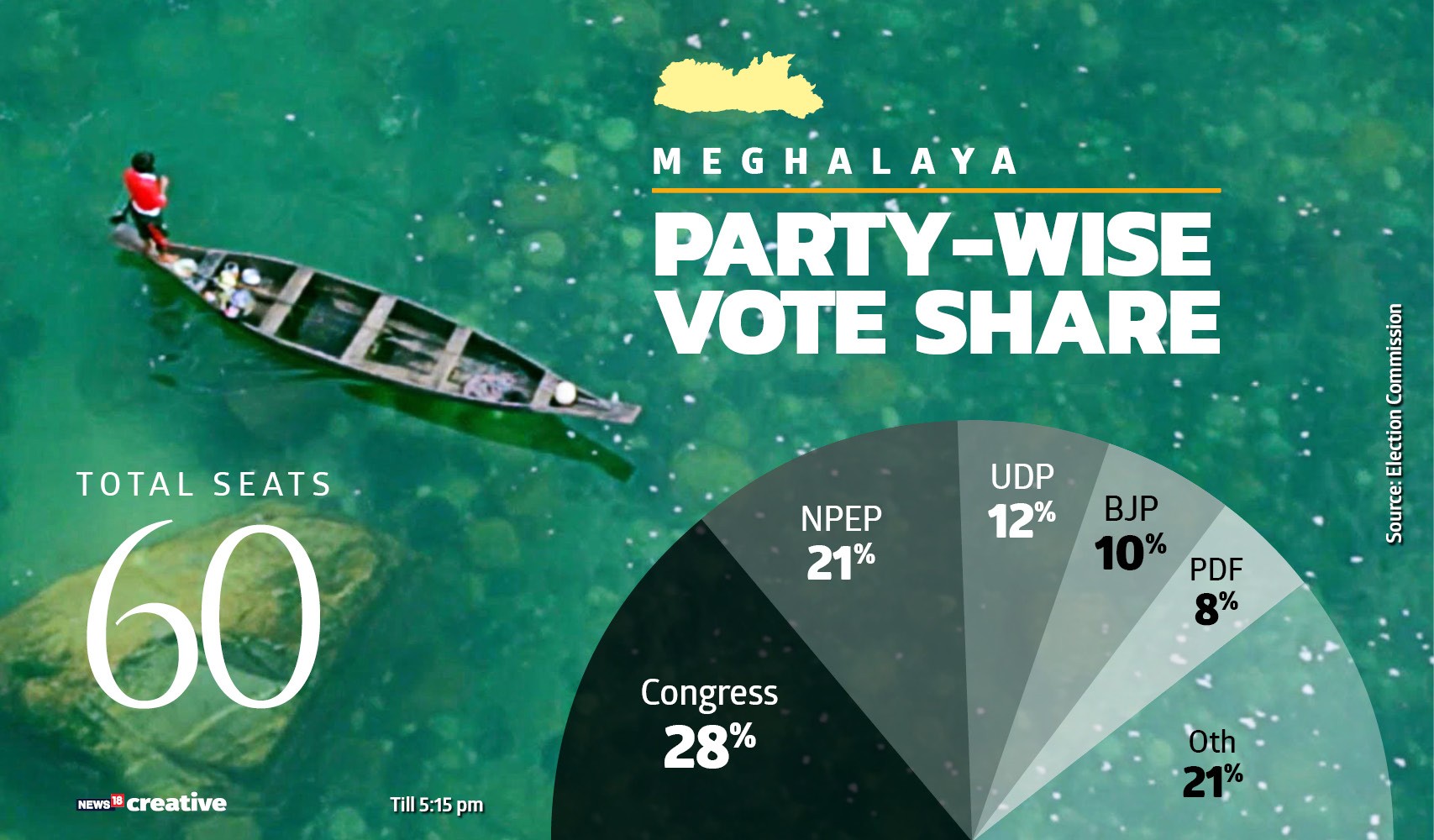 The Congress will stake its claim to form the next government in Meghalaya later in the day, senior party leader Kamal Nath said, expressing confidence it would succeed in its mission.

He said Congress was in touch all the regional parties in Meghayala in its efforts to form the government.

The encouraging performance of BJP in Meghalaya is a reflection of people’s commitment to uproot the politics of appeasement and a leap towards PM @narendramodi's politics of development. I congratulate entire @bjp4meghalaya unit for this remarkable performance.

60: The number of seats by which NPP won in Nongstoin constituency

8181: UDP's Kyrmen Shella won in Khiehrait constituency where BJP workers resigned enmass when Violet Lyngdoh was denied a seat. She went on to contest as NPP candidate and finished third, behind Justine Dkhar (BJP).

#JUSTIN | We are confident of forming govt in Meghalaya. We are not going to involve in horse-trading ... but I can’t say anything about @bjp4india: @ahmedpatel, Congress | #ElectionsWithNews18 pic.twitter.com/jRtv8aIiRX

Amit Shah talks on BJP's governance in other states

Even if we don't count Meghalaya, BJP & NDA has governance in 21 states across the nation today. Mandate after mandate has been in the favor of Narendra Modi Ji & his govt: Amit Shah pic.twitter.com/0xew3y77xY

We have a clear majority in Meghalaya. We have a setback in Tripura in Nagaland, we will have to work on that.: Ahmed Patel, Congress pic.twitter.com/RxxxB92TUZ

Second and only other BJP MLA from Meghalaya, Sanbor Shullai speaks after his win from South Shillong

"I am the only MLA in the state who represents the Cantonment area which has a lot of unutilised land. I will take this up with Centre and get them to allocate these lands from civilians use so we can construct toilets, playground, community halls," BJP's Sanbor Shullai said.

Counting of votes latest updates: With the results declared in Meghalaya, the Election Commission has said that the state has elected for a hung Assembly as Congress has emerged as the largest party with 21 votes.

Prime Minister Narendra Modi "expressed gratitude" over BJP's performance in Meghalaya, and said that the state's welfare is of utmost importance to the party.

Congress has won five seats so far in Meghalaya. Incumbent chief minister Mukul Sangma of the Congress has clinched victory from both Songsak and Ampati seats. BJP's Ram Madhav said that the party will still strive to form a government without Congress in the state. However, NPP's chief ministerial aspirant Agatha Sangma is trailing against Billykid Sangma of the BJP.

It seems the independent candidates will also play a crucial role in these elections as they are leading in 9 seats so far.

In Meghalaya, the Congress has exuded confidence of retaining power while the BJP and regional parties are equally gung-ho about unseating the ruling party. The Congress — which has been in power for a decade — had fielded candidates in all 60 seats, of which 59 went to polls. Seven of its legislators had quit and jumped on to the bandwagon of the Bharatiya Janata Party, National People's Party (NPP) and the newly floated People's Democratic Front (PDF).

Chief Minister Mukul Sangma, the chief architect of the Congress win on 29 seats in the 2013 elections, said he was confident of increasing the number of its MLAs in the new house. "We (Congress) are confident of coming to power again for the third consecutive time," Sangma, Meghalaya's longest serving chief minister, said to IANS.

"I don't see any anti-incumbency. Instead, there is so much of pro-incumbency. People of the state have faith and confidence in the Congress," he added. Congress president Rahul Gandhi, who visited Meghalaya twice during campaigning in Khasi Hills, Jaintia Hills and Garo Hills regions, had said, "We have the people's support and I am confident we will retain power in Meghalaya."

The BJP, which contested in the polls alone by fielding 47 candidates, was also confident of winning a good number of seats and forming a non-Congress government.

Prime Minister Narendra Modi, BJP chief Amit Shah, Defence Minister Nirmala Sitharaman and Tourism Minister KJ Alphons were among a host of top BJP leaders, apart from Assam Chief Minister Sarbananda Sonowal, who campaigned in the state. "Meghalaya is also getting ready for change. People have grown wary of the misdeeds and misrule of the Congress and pinning their hopes on change," BJP's election strategist and Assam Finance Minister Himanta Biswa Sarma said.

The NPP, an ally of the BJP with two MLAs, is hopeful of increasing the numbers as five former Congress legislators are contesting on NPP symbol this time. "People's voice is for change. We are hopeful to emerge as the single largest party in the Assembly and form the government," NPP president Conrad K Sangma said.

The combined regional alliance comprising United Democratic Party, Hill State People's Democratic Party and Garo National Council are also gung-ho about electoral victory. The HSPDP and the UDP had forged a pre-poll alliance in 36 seats in Khasi and Jaintia Hills, while the UDP had tied up with the Garo National Council for 24 seats in the Garo Hills.

"I hope people will reject the Congress, which even its own people have rejected by not contesting," UDP leader Bindo Mathew Lanong said. He said he is hopeful of the regional alliance leading in the new government.