In a stunning verdict, Sri Lankan voters on Friday ousted President Mahinda Rajapaksa from power, ending a 10-year rule that was marked by allegations of family rule, corruption and authoritarianism and chose his one-time minister Maithripala Sirisena in his place.

Hours after the results were declared, 63-year-old Sirisena, who led a revolt and defected to the opposition camp on the eve of announcement of the elections, was sworn-in as President symbolising a smooth transition of power.

Sworn-in along with him was his new Prime Minister Ranil Wickremesinghe, who till now was the leader of opposition. Both of them took the oath of office at a ceremony in the Independence Square. Supreme Court Justice K Sripavan administered the oath to Sirisena. 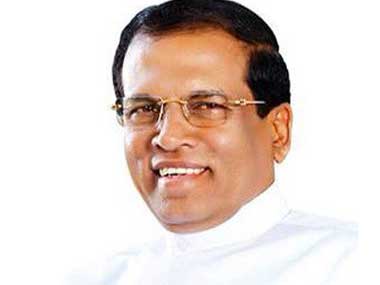 What was considered impossible till a few weeks ago became possible when the voters showed the door to 69-year-old Rajapaksa, who was suave but ruthless when it came to decimating the dreaded LTTE that had earned him the title of 'King' among the majority Sinhalese and unpopularity with the minority Tamils.

Health Minister under Rajapaksa and General Secretary of the ruling Sri Lanka Freedom Party till he defected, Sirisena got 6,217,162 or 51.2 percent of the votes against Rajapaksa's 5,768,090 or 47.6 percent.

"I declare that Maithripala Sirisena has been duly elected as the President of Sri Lanka," announced Commissioner of Elections Mahinda Deshapriya bringing the curtains down on the closely fought elections that was advanced by two years by Rajapaksa who had amended the constitution for seeking an unprecedented third term.

Much before the declaration, Rajapaksa, who was accused of practising politics of dynasty, conceded defeat early in the morning and left the presidential house 'Temple Trees'.

After his victory, Sirisena thanked Rajapaksa for ensuring a fair poll.

The minority Tamils and Muslims appeared to have voted heavily against Rajapaksa, who had earned the wrath of Tamils over the alleged human rights violations during the final phase of war against the LTTE in 2009 and for not implementing the promised constitutional amendments to devolve power to them.