Counting of votes began on Monday morning in the election to 147 municipal councils and 17 nagar panchayats across 25 districts in Maharashtra, seen as a litmus test for the Devendra Fadnavis' government.

Maharshtra Chief Minister Devendra Fadnavis  replied to Modi's tweet, in which the prime minister congratulated hm for the resounding victory. In his tweet, Fadavis thanked Modi and said that the verdit is a proof that the people are with Modi's policies.

Thanks Sir!
You inspired confidence in people that our Nation is transforming.Mandate shows Maharashtra is with your vision of transparency. https://t.co/ljVtcJ4Ewo

With BJP emerging as a major gainer in Maharashtra local polls, party chief Amit Shah said the results should be a "wake-up call" for the opposition parties who were "trying to mislead" people on demonetisation.

Maharashtra result should be a wakeup call for opposition attempting to mislead people on #Demonetisation, a decision in national interest. 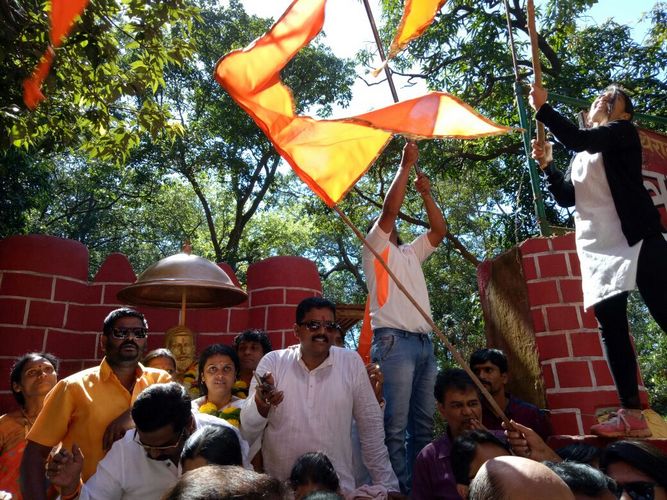 PM Modi tweeted out his congratulation to the state party unit and thanked the people of Maharshtra for showing faith in the party.

I thank people of Maharashtra for placing their faith in BJP in local body polls. This is a win for pro-poor & development politics of BJP.

According to a Firstpost correspondent, so far results for the post of presidents of municipal councils have been declared at 140 councils. BJP is maintaining its lead by cinching victory at 51 seats, Shiv Sena has bagged 24 seats, Congress has 21 seats, NCP stands at 19 seats while Others won at 25 seats.

According to the latest tally obtained by Firstpost correspondent, BJP has managed to maintain its lead by bagging 851 seats, while Shiv Sena won 514 seats. Congress has won 643 seats, while NCP secured 638 seats. MNS has logged victory at 16 seats and CPM has won 12 seats. BSP has claimed 9 seats, Others have won on 708 seats.

Result on 3510 seats have been declared so far.

Though the BJP-Shiv Sena are alliance partners for the polls, the top leadership of the two parties continues to exchange jibes.

Recently, the two allies were at loggerheads over the demonetisation issue with Sena chief Uddhav Thackeray criticising Centre's move.

Even as counting was underway, Shiv Sena on Monday endorsed NCP MP Udayan Raje Bhosale's warning that if the post-demonetisation situation fails to improve soon, "people will loot banks".

"Demonetisation has angered the people of the country. The condition of the poor and working classes everywhere is pitiable," Sena said in the party mouthpiece Saamana

The NCP, which is a key opponent of the Sena-BJP alliance, has made demonetisation one of the key issues in the local body elections.

Bharatiya Janata Party bagged 610 seats in the Municipal Council polls in Maharshtra while its ally Shiv Sena is has won 402 seats. Nationalist Congress Party is at the second position with 482 seats so far, while the Congress has secured 408 seats. Maharashtra Navnirman Sena has so far managed to win 12 seats while the BSP has won 4 seats. Other Independant candidates have won 583 seats, according to ANI.

According to the Maharashtra BJP's Spokesperson Keshav Upadhye, the party has won all the 6 seats for the President of Municipal Council in Wardha district. The BJP leader put out a tweet announcing the result.

Wardha District:
BJP win all 6 out of 6 Municipal Council Presidential Election's with clear majority of seats.✌✌#mahavoted4bjp

This is for the first time that presidents of municipal councils will be elected directly by people.

Counting of votes began on Monday morning in the election to 147 municipal councils and 17 nagar panchayats across 25 districts in Maharashtra, seen as a litmus test for the Devendra Fadnavis' government.

As many as 15,826 candidates are in the fray for 3,705 seats spread over the municipal councils and nagar panchayats, where voting was held yesterday in the first phase with around 70 per cent of the electorate exercising its franchise. No nominations were received for Shirala Nagar Panchayat in Sangli district while 28 candidates were elected unopposed.

Counting of votes began at 10 am.

Polling was also held for municipal council presidents post in 147 places for which 1,013 candidates are in the race.

The polls are being viewed as 'mini' Assembly election sand a test of popularity of Chief Minister Devendra Fadnavis who led the BJP campaign to make inroads in the rural areas where Congress and NCP hold sway.

Demonetisation, farm distress, improvement in rural infrastructure and caste tensions due to morcha by various communities in the run up to the polls were the main issues apart from local matters.

While ruling alliance partners, BJP and Shiv Sena, had tied up for the polls, the opposition Congress and NCP didn't formally announce any alliance.

While BJP projected development as its main plank, during the campaign Fadnavis hailed the demonetisation move as a major attack on black money. The Congress highlighted the hardships being faced by the poor and common man due to demonetisation among other issues.

In total, including Sunday's phase, elections are being held for 212 civic bodies, comprising municipal councils and nagar panchayats, in four phases. The next rounds of voting are scheduled on 14 December, 18 December and 8 January.

‘No such information’: Maharashtra home minister on Sameer Wankhede's claim of being spied on

As many as 3,616 patients were discharged from hospitals, pushing the count of recovered cases to 64,07,936.