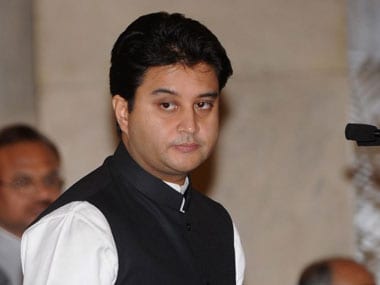 "How many leaders are they going to expel? If they continue expelling their leaders like this, soon the day will come when only Sonia and Rahul Gandhi will be left in the Congress," Hussain was quoted as saying by ANI.

"Congress is treating Sachin Pilot the same way they had treated Jyotiraditya Scindia. Congress does not include Pilot's photos even in their hoardings. Supporters and youth leaders of their party are unsure of their future under Congress' top leadership," he added.

Prime Minister Narendra Modi has arrived at the BJP headquarters in Delhi for the Central Election Committee (CEC) meeting to decide on the candidates for the upcoming Rajya Sabha election.

Union ministers Amit Shah, Rajnath Singh, Nitin Gadkari and BJP president JP Nadda have arrived at the party headquarters in Delhi ahead of the ceremony to induct former Congress leader Jyotiraditya Scindia into the saffron party, reports said. The ceremony is likely to take place at 6 pm on Tuesday evening.

The saffron party will also be holding a crucial legislature meeting later on Tuesday.

Madhya Pradesh Congress leader PC Sharma, one being asked if the party has enough MLAs to save the Kamal Nath government from falling in the state, said, "Certainly a new thing will come up. You will get to see Kamal Nath's masterstroke."

At least 22 MLAs of the party resigned on Tuesday after former senior Congress leader Jyotiraditya Scindia quit the party.

Madhya Pradesh Congress MLA from Sumawali in Morena, Adal Singh Kansana, on Tuesday tendered his resignation as member of Legislative Assembly. Several other MLAs of the ruling party in the state have already sent their resignations to Speaker NP Prajapati after former Congress leader Jyotiraditya Scindia quit the party.

The 19 Madhya Pradesh Congress MLAs who are in Bengaluru have written a letter to the Karnataka DGP asking for police protection after Jyotiraditya Scindia resigned from the party and is set to join the BJP.

ANI quoted the MLAs' letter as saying, "We've come to Karnataka voluntarily for some important work, regarding which we require protection for our safe movement and stay in and around Bangaluru".

After resigning from the Congress, Jyotiraditya Scindia is set to join the BJP at 6 pm, New18 reported. Additionally, Congress MLA Bisahu Lal Sahu joined the BJP and said that many MLAs are fed up with the functioning of Kamal Nath government.

In a major political twist in Madhya Pradesh, sulking Congress leader Jyotiraditya Scindia met Prime Minister Narendra Modi along with Union Home Minister Amit Shah, seemingly paving the way for his entry into the BJP. As crisis loomed over the Congress government in Madhya Pradesh, party sources said on Tuesday that efforts were on to woo back the disgruntled leader and former MP Jyotiraditya Scindia who remained 'incommunicado'.

While the BJP has called its legislature party meeting at 7 pm, the Congress will hold a similar meeting at 5 pm at the residence of the chief minister.

Seventeen MLAs, including at least six ministers, known to be Scindia loyalists, are currently in Bengaluru. Chief Minister Kamal Nath promised to reconstitute the state Cabinet after an emergency meeting late on Monday night. Following the meet, around 20 ministers resigned reposing faith in Nath's leadership.

In Delhi, sources said hectic efforts were underway by the Congress leadership to save the party's government in Madhya Pradesh and placate Scindia who has long been at daggers drawn with Kamal Nath over leadership issues.

"The party high command is sending emissaries, including Rajasthan Deputy Chief Minister Sachin Pilot to Scindia in order to win him back. But the efforts have not borne any fruit yet," a source told PTI. Pilot tried to reach out to Scindia but failed. The disgruntled Scindia did not respond to his message, sources said.

On Tuesday, Pilot tweeted, "I am hopeful that the current crisis in Madhya Pradesh ends soon and that leaders are able to resolve differences. The state needs a stable government in order to fulfil the promises make to the electorate."

"We have not been able to talk to him yet... Anyone who is a true Congressman will not leave the party," he said, adding the people of the state would give a befitting reply to anyone who attempts to undermine their mandate.

The Congress leaders have put up a brave face saying their government in the state would survive its full term.

"Respected Madhavrao Scindia ji's ideological loftiness, political wisdom, supreme morality, and commitment to the Congress are still milestones in Indian politics even today and will always remain so," it stated.

Chouhan, however, said the current crisis was an internal matter of the Congress and needed to be resolved internally.

While the Congress, which was voted to power in Madhya Pradesh after 15 years in 2018, has 114 MLAs, the opposition BJP has 107 legislators. Four Independent MLAs, two lawmakers of the Bahujan Samaj Party and one legislator of the Samajwadi Party are supporting the Congress-led state government.

These developments come amid reports of infighting in Congress' Madhya Pradesh unit ahead of Rajya Sabha elections and party's allegations that BJP is poaching their MLAs.

ANI quoted Madhya Pradesh forest minister Umang Singhar, who was present at the meeting, as saying, "All the 20 ministers who were here, have tendered their resignations. The chief minister can reconstitute the state Cabinet now. All are together. Scindia ji is also with the Congress."

The Congress government in Madhya Pradesh has accused the BJP of trying to poach its MLAs to topple the government, which enjoys a wafer-thin majority in the House. Nath, who was in Delhi earlier on Monday, has returned to Bhopal after cutting short his visit, PTI reported.