Jamiat-ulema-Hind leader Mehmood Madani may have spoken out against Congress and other parties for using secularism as a bait to get the Muslim vote, but he today made it clear it didn't mean he was endorsing Modi as a Prime Ministerial candidate.

In a late-night discussion 'The Buck Stops Here' on NDTV, he said, "Unfortunately, in the current scenario Modi can't be chosen as an option."

However, he also made it clear that Congress and the other 'secular' parties had used a negative propaganda to garner the Muslim vote rather than uplifting the condition of Muslims in India. 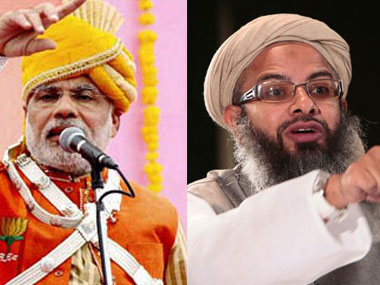 Muslims are clear: It is a secularism versus no-alternative debate.

"Congress all secular parties are running a negative campaign. Whenever you criticise them they will tell you not to talk so much, as it might get polarised into a Modi issue," Madani said.

Shahid Siddiqui, editor of Nai Duniya, also said that the Muslims have been pushed into a corner by the secular parties into choosing between non-existent alternatives.

"We have to carry the burden of secularism. They have done in the Muslim worse than Dalits. We are blackmailed into that," he said.

According to him, Congress and other secular parties always resort to the Modi versus secularism debate without looking at their own track record of communalism. "It's secular versus no-option debate."

However, noted lyricist Javed Akhtar appealed to the Indian voter to go beyond the Modi issue and think about the country's future as a whole.

In the same programme, he said, "At the moment you are not fighting against communalism. We are at the moment fighting with a fascist."

Even if one had had grievances against the so-called 'secular' parties that does not mean Modi goes scot-free for his communal actions, he added.

"Modi has become a symbol of all that the Sangh Parivar stands for. He is the personification of that ideology. This ideology is not just dangerous for minorities, but is dangerous for the social fabric of the entire country," he said.