Neemuch: As the campaigning for assembly elections is on its peak in Madhya Pradesh, the residents of seven unauthorised colonies in Neemuch's Baghana have put up posters outside their houses stating they will boycott the forthcoming polls.

The locals are also opposing the entry of any politician in the area, saying that till the time their colonies are not declared authorized and they are not provided with basic facilities, they would neither allow anyone to campaign in the area nor will exercise their franchise. 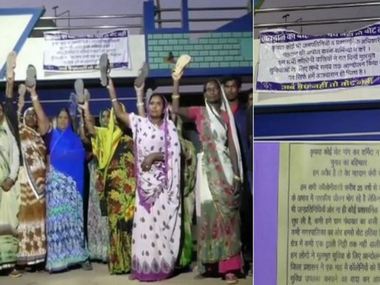 Image of locals protesting in the locality in Neemuch's Baghana. ANI

"Five years back they promised us that they will declare our colony authorized, but nothing happened. It has been 30 years since the colony was established. The BJP and the Congress cheated us, we would not let any political leader come here nor would cast votes," said Mukesh Rao, a local.

The locals have even put a black flag outside their house as a sign of protest.

As per the locals, during elections, the politicians camping in their locality and make tall promises, but never fulfill them.

"They did not do anything for us, why should we let them come here again. We bring water from other locality, even the sewage system is not proper here," said another local.

The state is slated to go to polls on 28 November and counting of votes will be held on 11 December.