Here is the live coverage of the AAP rally against the Modi government's land acquisition bill at Jantar Mantar, Delhi.

Party chief and Delhi CM Arvind Kejriwal has reportedly spoken to the family of farmer Gajendra Singh who committed suicide in Delhi on Wednesday. It wasn't yet made known what Kejriwal said to the family.

AAP has reportedly handed over a cheque of Rs 10 lakh to the family of Singh and its leader Sanjay Singh who visited the family's house this evening assured them of a government job.

Speaking to the media after meeting the family of Gajendra Singh, AAP leader Sanjay Singh said he shared the grief of the family and will put forth their requests to Delhi CM Arvind Kejriwal.

"Since he died for farmers' cause, we will talk to CM Kejriwal about granting him the status of 'Kissan Shaheed'. We will also consider giving a member of their family a government job when they are eligible," Sanjay Singh said.

AAP leader Sanjay Singh, along with a delegation of party leaders, is currently meeting with farmer Gajendra Singh's family in Dausa. The party, including its chief and Delhi CM Arvind Kejriwal have been accused of being insensitive to Gajendra's suicide.

The Delhi Police has accused the party of instigating the suicide by cheering Gajendra while he was climbing the tree. On Friday, party leader Ashutosh was seen crying on national television when he was speaking to Gajendra's daughter who was visibly unimpressed.

Even as the Delhi Police and the District Magistrate fought over the jurisdiction of the death of farmer Gajendra Singh, now the police have finally replied to the DM.

According to NDTV reports, the Delhi Police have told the DM, "Only judicial magistrate has jurisdiction over the matter."

I'm no one to judge if AAP is a culprit or not, if his tears are real or not, but AAP's credibility has been dented cuz of this. #AshuCries

If #AshuCries, why mock him people !! I don't agree to this. Can be his real emotions as well..

Contrast grace and calm of Gajendra's daughter under tragic circumstances with #AshuCries on national television! Who deserves your respect?

This is what happens when a script writer is asked to do acting over his own script #AshuCries #AAPKilledFarmer pic.twitter.com/t3r2Y6ALYh

If Ashutosh had taken two minutes out of the rally, Gajendra could've been saved: Farmer's brother reacts to Ashutosh bursting into tears

Gajendra Singh's brother Devendra reacted to AAP leader Ashutosh crying on live TV and said if Ashutosh had taken two minutes out of the rally, Gajendra Singh could have been saved.

"I want to ask Ashutoshji now that he is expressing his sentiments: Wasn't he present in the rally that day?" Devendra said. "If he (Ashutosh) had taken out time of 2 minutes that day, this wouldn't have happened."

Delhi police not in a row with anyone else, says BS Bassi

"We will do whatever is required in the investigation. We will inform the media about developments in the case at approporiate times," he said, adding that the probe will done according to an action plan.

As a weeping Ashutosh urged political leaders to stop indulging in dirty politics, BJP's Sambit Patra said, "Don't cry, Ashutosh. One should not get carried away by emotions. A politician should rise above his emotions." 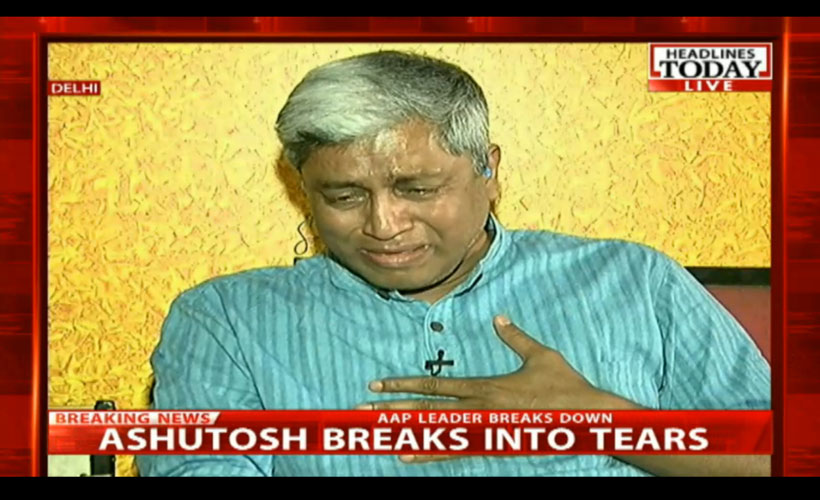 As Ashutosh was crying on live TV, BJP national spokesperson Sambit Patra said, "I am very sad Ashutosh is crying." 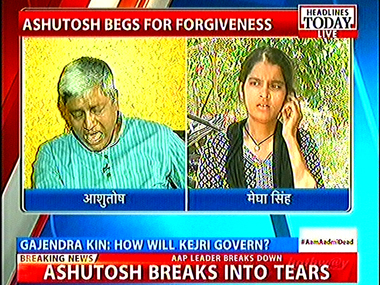 Upping its ante against the Centre's "anti-farmers" agrarian policy and Land Acquisition Bill, the Aam Aadmi Party on Tuesday will launch a rally on the issue.

The rally will start from Jantar Mantar at around 12.30 pm, where Delhi Chief Minister Arvind Kejriwal will address his supporters, but he won't be a part of the march towards the Parliament.

Lashing out at the Centre, party leader Sanjay Singh on Monday had said the party will protest against the "deadly Act" for the farmers tooth and nail.

The party had said farmers from Chhatisgarh, Jharkhand, Punjab, Haryana, Odisha, the Bundelkhand and Poorvanchal belt of Uttar Pradesh will also participate in the rally to protest against the Bill. "The BJP says that they have made necessary changes in the Act. This is nothing but a joke. What compelled the BJP to change the provisions of the Act, just after nine months in power? This is nothing but a move to benefit its industrialist friends," Singh had said. "The dark law which Modi government has brought about on land acquisition will not benefit farmers."

"Modi govt has issued a maut ka farmaan through this land bill," Singh had said. "Our demand is that this dark land bill be repealed."

Taking a jibe at Congress Vice-President Rahul Gandhi, Kumar Vishwas, who had contested against the Gandhi scion from Amethi, had said he should first explain how Robert Vadra benefitted from the alleged land scam in Haryana.

"He has come back from a vacation and his entertainment tour. The leader has been talking about the welfare of the farmers," Vishwas had said.

"Congress is just pretending to care about farmers. They sent their yuvraj to make a speech on farmers' issues after his two-month long vacation. This is because of frustration," he had said.

The AAP leader also lauded Arvind Kejriwal for announcing Rs 50,000 per hectare as aid for farmers.

Delhi Police, however, had maintained that the rally will not be allowed to proceed toward the Parliament from Jantar Mantar as prohibitory orders under Section 144 of the CrPC remains imposed in the area.

"Jantar Mantar is the designated spot for protests. Nobody will be allowed to move from there toward the Parliament," said a senior Delhi Police officer.

The land acquisition bill by the Narendra Modi government has faced a lot of attack by the Opposition. Congress vice-president Rahul Gandhi had called the government 'suit boot ki sarkar' over the land bill issue in the Lok Sabha and had alleged that the government was only bothered about industrialists and did not care about farmers.

The government, on the other hand, has maintained that the land bill was not anti-farmer and the Opposition was only attacking the bill because it had run out of issues over which it could oppose the government.

Parliamentary Affairs Minister M Venkaiah Naidu had alleged Congress is continuously trying to spread falsehood as truth and had asked party MPs to counter it aggressively.