Kerala Assembly Speaker gets Rs 50,000 in reimbursement for glasses, says doctor advised him to buy them

Thiruvananthapuram: A controversy has erupted over Kerala Assembly Speaker P Sreeramakrishnan purchasing a pair of spectacles for nearly Rs 50,000 and getting the amount reimbursed from the cash-starved state exchequer. 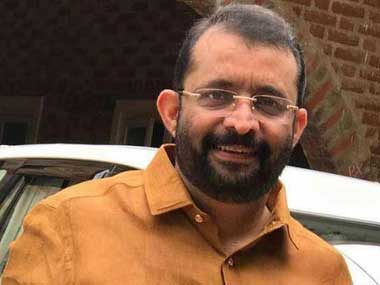 The information with regard to the costly glasses emerged this morning, a day after the presentation of the CPM-led LDF government's  2018-19 Budget which advocated stringent financial discipline to tide over the crisis.

Replying to an RTI query by Advocate DB Binu of Kochi, the legislature secretariat has stated that the Speaker spent Rs 49,900 for spectacles — Rs 4,900 for the frame and Rs 45,000 for the lens.

Meanwhile, reacting to the row, the Speaker said it was that the spectacles had been purchased.

Binu told PTI that he had also sought the copies of the bills son doctor's advise ubmitted by Sreeramakrishnan which had not been given and hence he would approach the state Information Commission against the furnishing of incomplete disclosure by the assembly secretariat.

Earlier, Health Minister KK Shylaja had landed in a controversy after she purchased spectacles worth Rs 28,000 and got it reimbursed from the exchequer.

There were also allegations that Shylaja had forged documents to claim reimbursement of medical expenses for her husband and the Vigilance and Anti-Corruption Bureau has begun a preliminary probe on a complaint from BJP state general secretary K Surendran.

In 2004, the then Speaker Vakkom Purushothaman had put a cap on the reimbursement of the price of spectacles frames saying it should not exceed Rs 5,000 after it was found that huge amounts were being claimed by members, Binu said.