Telangana chief minister and Telangana Rashtra Samithi (TRS) president K Chandrasekhar Rao (KCR) on Monday met his West Bengal counterpart Mamata Banerjee in Kolkata and said that they would soon come out with a "concrete (political) plan" while asserting that the dialogue for a federal front will continue. 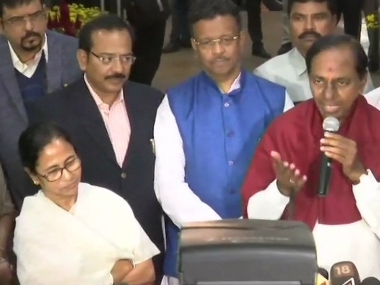 KCR and Mamata Banerjee speak to the media post their meeting in Kolkata. ANI

Rao said that he would continue his efforts to conjure up non-BJP, non-Congress parties through dialogue as that is the aim of his party. Rao told reporters that he and Mamata discussed matters of political interest and the like-minded leaders will come out with a concrete plan soon.

The TRS chief met Mamata a day after meeting Odisha Chief Minister and Biju Janata Dal (BJD) president Naveen Patnaik in Bhubaneswar, another strong regional party leader in a bid to bring together a third-front featuring regional parties before the 2019 Lok Sabha elections.