Karunanidhi passes away at 94: Madras High Court to decide on burial site for DMK chief at 8 am today

Chennai: The Madras High Court on Wednesday morning at 8 am would decide on the DMK's plea against Tamil Nadu's government's decision to deny burial of the party president M Karunanidhi's body at Marina Beach.

Hearing the plea late Tuesday night, the court directed the state government and the Chennai Corporation to file their replies and adjourned the case to Wednesday morning 8 am.

At the hearing, the state government had opposed the allotment of space at Marina Beach for burial of Karunanidhi's body. 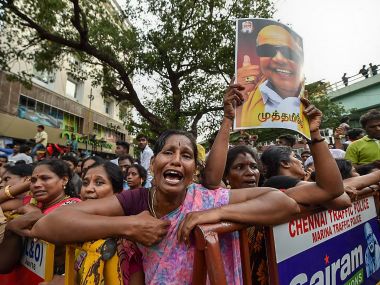 On Tuesday, the DMK party and family members of Karunanidhi had requested the state government for allotment of space near DMK founder CN Annadurai's memorial at the Marina Beach.

Citing pending cases against the burial of bodies at the Marina Beach, the AIADMK government had said it was ready to allot two acres near Gandhi Mandapam on Sardar Patel Road where Raj Bhavan is located.

Ramadoss urged the ruling party not to indulge in politics in this matter, saying the reason stated by the government is not acceptable.

He said Karunanidhi was the chief minister of Tamil Nadu for 19 years and his last rites should be done in a decent manner.

The mortal remains of AIADMK founder MG Ramachandran and his successor Jayalalithaa are buried near Annadurai's memorial on the Marina Beach.