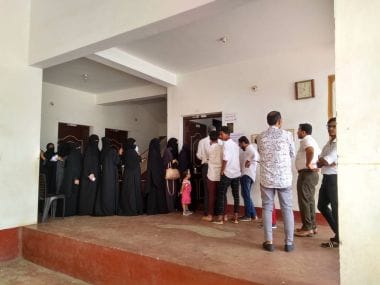 Karnataka urban local body elections 2018 latest updates: BJP MLA Mahadevappa Yadavad and former Congress MLA Ashok Pattan had a verbal clash at Ramadurg. Both politicians went with supporters to observe polling, and faced each other at ward no. 12, 9, 3 and 2. Both were trying to enter prohibited area near polling stations.

However, election officers have pulled out everyone from the prohibited area. Verbal clashes occurred between both the politicians' supporters outside polling station. Cops finally used mild lathi charge to disperse supporters and control overall situation.

As of 1 pm, Tumakuru district recorded 35.5 percent voting across its urban local bodies, with the highest in Gubbi at 49.78 percent on Friday.

In Ranebennur, the fight is between R Shankar, from KPJP (Karnataka Pragnyavantha Janatha Party), and former speaker KB Koliwad from Congress.

The Urban Local Bodies poll in Karnataka is being seen as tech run before the final show in the 2019 Lok Sabha polls. The results will likely decide the alliance for several Lok Sabha constituencies between Congress and the JD(S) next year.

For the first time, NOTA (none of the above) option is being introduced in the ULB polls in Karnataka. EVMs will be used for the polling. Arrangements have been made to use 4,640 ballet units and 4,940 control units.

Tension prevailed for a while at polling booth 3 in Bellur, Nagamangala taluk, when a few women were asked to remove their burkhas before voting. Before the matter could escalate further, senior officials arrived and resolved the issue. The women were finally allowed to cast their votes without removing their burkhas. The polling percentage for five ULBs in Mandya district was just 8.25 percent in the first two hours. According to official data provided by the District Election Commission, polling percentage for the ULBA Mandya CMC was 7.64 percent by 9 am.

The ULB polls are also important for the BJP, which had emerged as the single largest party during the Karnataka Assembly election, to assess its popularity across the state.

The formation of coalition government by the Congress and Janata Dal (Secular), arch political rivals in the district, has dampened the spirit of voting, according to political observers here.

Elections for 14 urban local bodies is being held in Belagavi. 453 polling centres have been established for 343 wards. 4,14,000 voters will exercise their franchise. There is direct fight between BJP and Congress. JD(S) doesn't have a presence here.

As many as 70 of the 102 ULBs are in Northern Karnataka region, where people are protesting and demanding a separate state. The election result would have an impact on JD(S)-Congress coalition government as people of this region are upset with the JD(S) led government.

In Mysore City Corporation, elections will be held for 65 ward seats. The contest is mainly between Congress and BJP as JD(S) is fielding candidates in only 23 of 65 seats.

Rains and inclement weather in Ullal, Bantwal, and Puttur might bring down the voting percentage in these taluks, fear the election officials.

The State Election Commission of Karnataka has displayed photos of candidates in EVMs for the first time in the Urban Local Bodies polls.

Elections to three Urban Local Bodies — Somwarpet, Virajpet and Kushalnagar — in Kodagu district, Karnataka have been delayed due to heavy rains and flash floods in the district.

All the three major political parties in Karnataka i.e. the Congress, the JD(S) and the BJP have fielded candidates in the 2,574 wards in 102 local bodies going to the polls on Friday. Voters queue up outside a polling booth in Buntwal. Firstpost/Team 101 Reporters

The first phase of elections to Urban Local Bodies (ULBs) in Karnataka is going to be held on on Friday after being postponed by two days. Elections will also be held to three major city corporations, in Mysuru, Tumakuru and Shivamogga as the Karnataka High Court cleared a case regarding reservation of wards in these constituencies. Arrangements have been made for election in 102 Urban Local Bodies (ULBs) across Karnataka on Friday, said a poll official on Thursday.

"All arrangements, including security, have been made for polling in 102 ULBs on Friday from 7 am to 5 pm," State Election Commissioner PN Srinivasulu said in Bengaluru.

About 40,000 security personnel have been deployed in cities and towns where the civic polls are being held.

Electronic Voting Machines (EVMs) are being used in the civic poll.

Counting of votes will be taken up on 3 September and most of the results are expected by night or early Tuesday.

Though the civic election was earlier scheduled to be held in 105 ULBs, it has been postponed in three of them — Somwarpet, Virajpet and Kushalnagar — due to heavy rains and flash floods early this month in their Kodagu district, about 270 kilometres from Bengaluru.

"Election in these three towns will be held after normalcy returns to the district," said the commissioner.

Polling will be held in 2,529 wards spread over 29 city municipalities, 53 town municipalities and 23 town panchayats and in 135 wards of the three city corporations.

The state government has declared holiday for offices, schools and colleges.

A total of 36-lakh voters are registered for exercising their franchise in the ULB wards and 13.33 lakh in the three towns of Mysuru, Shivamogga and Tumakuru.

Though the JD(S) and the Congress formed a coalition government after the 12 May Assembly election threw up a hung House due to a split verdict, the ruling alliance partners are contesting against each other in the ULBs separately.

The BJP, which won 104 seats in the 224-member Assembly, is contesting against the alliance. The Congress won 80 seats and JD(S) 36 seats in the Assembly poll.

Elections to about 100 other local bodies, including Bengaluru, will be held after they complete their present term.