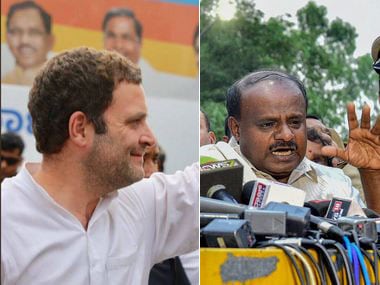 Karnataka government formation LIVE updates: "I am of firm belief that Election Commission has taken a serious note of VVPAT machines found abandoned in a shed near Managuli village in Vijayapur district. It indicates grave irregularities in the conduct of assembly polls in Karnataka," BS Yeddyurappa reportedly said in a letter to the chief election commissioner.

Ahead of his swearing-in as the Karnataka's new chief minister, JD(S) chief HD Kumaraswamy on Monday night met Congress leaders Sonia Gandhi and Rahul Gandhi to finalise the modalities of government formation and ministerial berth sharing between the two post-poll allies.

Kumaraswamy, who will be sworn in as chief minister on Wednesday for the second time in 12 years, flew into the capital this afternoon and began his engagements with a meeting with pre-poll ally BSP chief Mayawati. BSP bagged 1 seat.

During his 20-minute meeting with Sonia and Rahul, the Congress president, Kumaraswamy is understood to have discussed the nitty-gritty of Cabinet formation on the number of ministerial berths the Congress and the JD(S) would get. The meeting took place at Rahul's Tughlak Lane residence.

"There is no bargain. We will cordially work out things. We must work together. I am here to take their (Congress leaders) advice," said Kumaraswamy when asked by newsmen ahead of the meeting how the Congress and the JD(S) will address the issue of ministry formation. "We are going to give a stable government. All these issues are not yet discussed. We have not discussed any future course of action".

After the meeting, Kumaraswamy told reporters he had invited both Sonia and Rahul for the swearing-in ceremony in Bengaluru and they have agreed to come. KC Venugopal, AICC in-charge of Karnataka, was also present at the meeting.

Kumaraswamy is expected to take the floor test within 24 hours after being sworn in. Both Congress and JD(S) MLAs will remain confined to their hotels till the floor test, according to reports from Bengaluru.

Kumaraswamy was invited by Governor Vajubhai Vala to take the reins of power after the three-day BJP government collapsed last Saturday with BS Yeddyurappa, unable to muster the required number for a majority, stepping down as the chief minister without facing the floor test in the state Assembly.

The 12 May Karnataka assembly polls threw up a hung verdict with the BJP emerging as the single largest party with 104 seats. The Congress was next with 78 and the JD(S) followed with 37. The BSP has one MLA and two seats went to Independents.

Meanwhile, in a development that could leave the Congress red-faced in Karnataka, its MLA Shivaram Hebbar dismissed as "fake" an audio clip released by the party to allege that the BJP offered money and ministerial berth to him for cross-voting during the floor test in the Assembly.

The Congress had released three audio tapes in the run up to the floor test, claiming that the BJP leaders were trying to 'poach' on the party MLAs by offering 'blandishments' so that the Yeddyurappa government is saved.

One of the audio tapes released by the party allegedly had a conversation between Hebbar's wife and BJP leaders, who allegedly offered money and ministerial post to woo him to vote for the BJP.

However, in a Facebook post in Kannada, Hebbar questioned the authenticity of the audio clip, saying his wife did not receive any such call.

"This is not my wife's voice and she has not received any such calls. The audio tape is fake. I condemn it," he wrote.

BJP president Amit Shah said the new government will be a "betrayal" of people's mandate and questioned its fate, saying it is already "destabilised" with the two parties forced to keep their MLAs in hotels "undemocratically".

Addressing a press conference in Delhi, Shah also mocked the Congress for its celebration at the turn of events in Karnataka, saying it has found a new way of discovering win in its defeat and added that he prayed that it sticks to its definition of victory. The BJP then would have no problem in winning the 2019 Lok Sabha polls, he said.

Describing the Congress-JD(S) alliance as "unholy", he said the HD Deve Gowda's party fought the election on an anti-Congress plank and benefitted from people's mood against the incumbent party in the state.

At an event in Bengaluru, G Parameshwara said difficult times were ahead, but there was a need to stop the BJP from coming to power in the southern state.

He said he understood the sentiments of many who were averse to a tie-up between the Congress and JD(S).

However, the need to keep communal forces away from power made the Congress lend support to JD(S), Parameshwara said.

"I do understand the sentiments of many people that we should not have gone with the JD(S). But there was a need to stop the BJP from coming to power again in Karnataka. Keeping this in mind, our seniors took a decision to support the JD(S). We all must accept their decision," he said.

"We may see difficult times ahead. We are visualising the challenges ahead, but we need to bear all the hardship to build a strong party," the Karnataka Pradesh Congress Committee (KPCC) chief said.