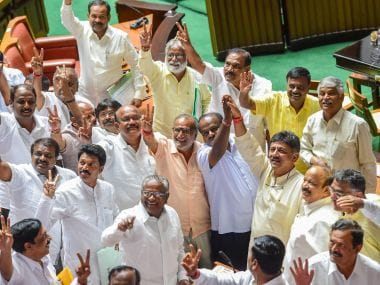 Karnataka Assembly floor test LIVE updates: With BS Yeddyurappa out of their way, Congress and JD(S) have started working out the modalities of their alliance. NDTV reported that the two parties have agreed that the deputy chief minister will be elected from the Congress party and most likely it will be G Parameshwara. JDS leader and Chief Minister-designate HD Kumaraswamy confirmed that the swearing-in is scheduled for 21 May between 12.30 and 1 pm. Kumaraswamy further said that the Congress-JDS leaders will meet on Saturday at around 8.30 pm to discuss the modalities of the merger and forming the new government. "Senior Congress leaders Sonia Gandhi, Rahul Gandhi, Ghulam Nabi Azad, Ashok Gehlot and opposition leaders Mamata Banerjee, KCR, Chandrababu Naidu, Mayawati, Sharad Pawar and Akhilesh Yadav have been invited for the gala celebrations," Kumaraswamy told the press on Saturday evening. Governor Vajubhai Vala invited Kumaraswamy to form the government and prove his majority in the House.

Newly-appointed Chief Minister of Karnataka BS Yeddyurappa has resigned from the post which was given to him just two days ago. He submitted the resignation to Governor Vajubhai Vala at the Raj Bhavan.

BS Yeddyurappa attacked the Congress-JDS alliance in his speech ahead of the crucial floor test and ended it by resigning at the Karnataka chief minister. After making the announcement BS Yeddyurappa went on to meet and shake hands with JDS chief Deve Gowda and senior Congress leaders, including Ghulam Nabi Azad. JDS-Congress MLAs immediately started flashing the victory sign and celebrating inside the house. The JDS and Congress leaders announced that they are now waiting for the Governor to call them.

During his speech, Yeddyurappa was briefly interrupted by former Karnataka CM Siddaramaiah who asked the former to move the trust motion while BS Yeddyurappa went on with his attacks. He said, "I don't do party politics. I do people's politics." Yeddyurappa also said, "My only aim to form the government was to serve the farmers and Dalits who were suffering." Yeddyurappa had earlier spoken to BJP president Amit Shah over phone amid speculation of his resignation. Meanwhile, Congress MLAs Anand Singh and Pratap Gouda Patil, who had been incommunicado for a while and missed the oath-taking ceremony in the Assembly, have now come back in the Assembly. The Assembly session began on Saturday morning with pro tem Speaker Bopaiah administering the oath to all newly-elected MLAs.

HD Kumaraswamy, the chief minister candidate of the Congress-JDS combine, said that they are waiting for an invitation from the Governor's House to take oath as the new Karnataka chief minister. Earlier, Yeddyurappa began his speech in Vidhan Soudha and slammed the 'unholy alliance' between the JDS and the Congress. The chief minister had earlier spoken to BJP president Amit Shah over phone amid speculation of his resignation before the floor test. Congress MLAs Anand Singh and Pratap Gouda Patil, who had been incommunicado for a while and missed the oath-taking ceremony in the Assembly, are now back in the Assembly.

The stage is set for the floor test in Karnataka Assembly to test the strength of the two-day-old BS Yeddyurappa government amid allegations of poaching and horse-trading. The floor test will be overseen by pro tem speaker KG Bopaiah after the Supreme Court dismissed a Congress petition against his appointment and ordered live telecast of the proceedings. Sources said the floor test will be conducted via a show of hands. The Assembly session began on Saturday morning with Bopaiah administering the oath to all newly elected MLAs.

Following reports that BS Yeddyurappa might resign if he does not have enough numbers to prove majority, Congerss' DK Shivakumar exuded confidence that his party will soon come to power. "I am sure he will resign before the trust vote," he said.

Meanwhile, the Congress has released another audio tape, this time alleging that BS Yeddyurappa offered ministerial post to MLA BC Patil.

Meanwhile, Congress MLAs Anand Singh and Pratap Gowda Patil have been allegedly kept captive in Gold Finch Hotel in Bengaluru. Additional Commissioner Seemanth Kumar Singh along with his team are leaving for the hotel, the report said.

Congress leader Veerapa Moily said that BJP will be "exposed" to the whole world. "They (BJP) know very well that they are 104. Still they are trying everything and anything to buy our MLAs. But, our MLAs are intact.

The Supreme Court, earlier on Saturday, turned down Congress and JD(S)' plea against the appointment of KG Bopaiah as the pro tem Speaker KG Bopaiah. However, it allowed the live telecast of the trust vote.

Ahead of the trust vote, JD(S) leader HD Kumaraswamy said that it wasn't an important day for him. "The important days will come in future. Till 4 pm, BJP will try to poach our MLAs. All the MLAs are together; no one is going to go to the other side," he said.

Ramalinga Reddy claimed that Congress MLA will defy the party whip during the trust vote on Saturday. "Physically he is not with us, but he is in contact with our leaders... He will definitely vote for us" he said.

Chief Minister BS Yeddyrappa, who will be facing the floor test on Saturday, has reached Shangri-La Hotel for the BJP legislature meeting. Appearing confident, BS Yeddyurappa urged his supporters to stay calm and said that they would be celebrating at 5 pm.

Buses carrying Congress MLAs reached Hilton Hotel in Bengaluru ahead of their oath-taking ceremony and the floor test in Karnataka Assembly.

The Supreme Court directive on Friday to hold a floor test in the Karnataka Assembly on Saturday led to heightened political activity in the state, with the Congress-JD(S) post-poll alliance sure of Chief Minister BS Yeddyurappa losing the battle and the BJP sounding confident to sail through.

The Supreme Court had in its Thursday morning order rejected Yeddyurappa's plea, made through senior counsel Mukul Rohatgi, asking for at least a week's time to face the floor test, and directed it to be conducted on Saturday instead.

A bench of Justice AK Sikri, Justice SA Bobde and Justice Ashok Bhushan on Friday said the pro tem Speaker, conventionally the senior-most member of the Assembly, would administer the newly-elected members their oath and then conduct the floor test.

The court junked Attorney General KK Venugopal's suggestion that the floor test be conducted through secret ballot. The court also barred Yeddyurappa from taking any policy decisions till the floor test. 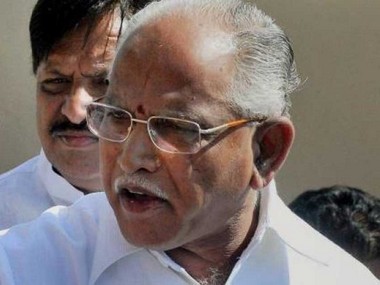 On Friday evening, the confrontation between the two sides once again reached the Supreme Court, with the Congress claiming that the appointment of BJP legislator KG Bopaiah as pro tem Speaker by the Governor "violates every single constitutional norm" of senior-most member being appointed to the post.

Yeddyurappa was on Thursday morning sworn-in as the chief minister after the 12 May election threw up a hung Assembly. The BJP won 104 of the 222 seats, falling eight short of the 112-halfway mark. The Congress bagged 78 seats and the JD(S) 37.

The court also restrained the chief minister from nominating an Anglo-Indian member. Following the apex court order, Yeddyurappa told reporters in Bengaluru that he was confident of proving his majority in the House. "We welcome the Supreme Court order of floor test at 4 pm on Saturday. We are confident of proving our majority," he said. Union Human Resource Development Minister Prakash Javadekar, who was election in-charge of the BJP in Karnataka, also expressed similar confidence.

On the other hand, Congress president Rahul Gandhi said the BJP's "bluff" has been called. "The BJP's bluff that it will form the government, even without the numbers, has been called by the court. Stopped legally, they will now try money and muscle, to steal the mandate," he tweeted.  Congress communications in-charge Randeep Singh Surjewala told reporters in Delhi that they will bring the matter of Bopaiah's appointment before the court.

He said Congress member RV Deshpande was the senior-most member of the House.

Bopaiah, 62, is a three-time legislator. He was speaker during the BJP rule in the state from 2008-13. Surjewala said Bopaiah has been indicted by the apex court. "People of Karnataka are determined to foil and defeat these evil and nefarious designs of Governor Vajubhai Vala, Narendra Modi and Amit Shah," he said. Party spokesperson Abhishek Manu Singhvi said the BJP will be defeated in floor test and that Yeddyurappa had exhibited "desperation" in becoming the chief minister. Singhvi referred to Venugopal's suggestion and took a dig at the Modi government, saying that trust vote is never conducted through secret ballot.

However, BJP spokesperson Sambit Patra accused the Congress of "murdering the mandate" in Karnataka after being "rejected" by the people of state with its numbers coming down from 122 to 78.

"The Congress has welcomed the Supreme Court's decision. Some days back they had questioned the Supreme Court verdict in the case of judge Loya's death. They even tried to impeach the CJI," he said. Patra said both "prayers" of the Congress to the apex court to quash Governor's decision to invite the BJP to form government and to invite the Congress-JD-S instead have been rejected. "Yet the Congress is claiming victory, like Rahul Gandhi had claimed 'moral victory' after defeat in Gujarat elections," he said.

Meanwhile, both Congress and JD(S) leaders said they had shifted legislators to Hyderabad to prevent the BJP from "poaching" them.

In Bengaluru, Congress leader Ghulam Nabi Azad said it is surprising that the Congress and the JD(S), which together have the support of 117 legislators including two Independents, were not invited to form a government by the governor.

Siddaramaiah held a crucial meeting with newly-elected Congress MLAs in Hyderabad to discuss the strategy to be adopted during the floor test.