There's an election in the air. And in India, you are most likely to sense it from the nature of vitriol some BJP leaders pour into their public addresses.

Take for example Union Minister of State Sadhvi Niranjan Jyoti. Kicking off the party's poll campaign for the upcoming Delhi elections, the minister sought to spice up things in her speech and try pack in more punch to the usual 'our-party-is-the-best' slogan. So, she asked Delhi, "Aapko tay karna hai ki Dilli mein sarkar Ramzadon ki banegi ya haramzadon ki. Yeh aapka faisla hai (You have to decide if you want a government peopled by the children of Ram or one full of bastards.)

Not only is 'haramzadon' a word that is scrupulously kept out of any civilised conversation in India, the implications of using it at a politically rally and against political opponents are clearly appalling. Add to that the little wordplay the 'Sadhvi' decided to indulge in - Ramzadon versus Haramzadon - and you get the BJP's poll mantra in one disturbing sentence. And that is stoking a sense of Hindu supremacy while labelling any counter-view illegitimate. The 'us' versus' 'them' strategy has reaped rich benefits for the party both in the general elections and state polls that follow making it a favourite with the party.

It took a full day for the party to respond to the comments, and amid a joint expression of outrage by a united opposition in both houses of Parliament, a defiant and reluctant looking Sadhvi Niranjan Jyoti was made to apologise. She first said that if the members, "if anyone is hurt by what I said I express regret and take my words back" but according to Finance Minister Arun Jaitley, she also used the word 'apology' that was however lost amid noisy protests.

Opposition parties also demanded her resignation, but the BJP has firmly said that this is out of the question. "She has already apologised for her remarks. The matter ends there, there is a precedent in the House. This has become a habit of the Congress party, we are not here to accept their demands", Minister of Parliamentary Affairs, Venkaiah Naidu said.

But that's probably because the party is quite familiar to the nature of this offensive and has indulged in it time and again in the past elections.

Take for example Yogi Adityanath, who was put in charge of the Uttar Pradesh bypolls campaign this year. Flush with the mind-blowing victory of the party in the general elections that had concluded a few weeks ago, Adityanath thought it made sense to launch on an offensive that sharply polarised the Muslim and the anti-Muslim votes. The Times of India reported in September this year: "BJP MP Yogi Adityanath courted more controversy in Noida on Sunday when he equated the rise in communal violence in western UP with the increasing population of a particular community". 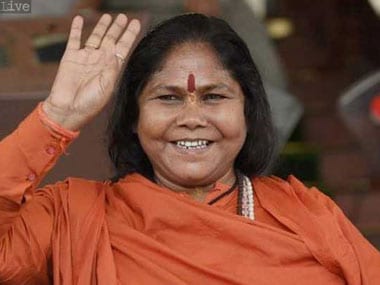 Hindustan Times quotes the leader as saying in Noida: "There have been 450 riots cases in West UP in two-and-a-half years of Samajwadi Party because the population of a particular community is rising manifold. Why there are no riots in Eastern UP? you can easily understand."

Consequently, he was shut down by the EC and was forbidden from holding public rallies before the polls took place on 13 September.

In August, two months after the BJP's stupendous general elections victory, the Uttar Pradesh unit of BJP decided to kick off their bypoll campaign with a meet where the state chief Laxmikant Bajpai ranted continuously about the Muslim community and how the Samajwadi Party government was trying to promote them. Of the things the party decided to focus on were 'conversion of Hindu girls' and 'crimes of rape', reports The Indian Express. In the same context Bajpai said, "Have they got the certificate to rape girls because they belong to a particular religion?" Offensive doesn't even begin to describe the implications of Bajpayi's comments.

In fact, IE reports that the same meeting was convened to set the agenda of the 2017 assembly elections in Uttar Pradesh. One can well imagine the vocabulary the party might resort to as the polls draw closer.

Then again, in April this year, as the final phase of the general elections was underway, BJP leader Giriraj Singh said that anyone who doesn't support Narendra Modi should go and live in Pakistan. "Those opposing Narendra Modi are looking at Pakistan, and such people will have place in Pakistan and not in India," he had said.  Modi, however, had immediately distanced himself from the comments.

During the last phase of the polls, Narendra Modi and most senior BJP leaders had shown spectacular restraint in their public addresses and taken the way around abusive rhetoric, focussing on issues of development and corruption instead.

However, when the BJP's campaign was still gathering steam, Modi single-handedly pilloried the Congress and the Gandhi family with sharp, personal attacks though he never had to resort to the crassness of some of his colleagues. Prior to the elections he had coined two new names for Sonia Gandhi and Rahul Gandhi - 'Madam' and 'Shehzada' - and used only those names to refer to his political rivals in the rallies. In November 2013, he went ahead and took a direct dig at reports that Sonia Gandhi was unwell. He had said, "Madam, you are ill. Let the shehzada (prince) take over. And let's see then if he can deliver round-the-clock electricity to Chhattisgarh." He had also named former Prime Minister Manmohan Singh a 'night-watchman' in the early days of campaigning.

Modi even led the BJP brigade in their bid to make Rahul Gandhi look immature, hence, incapable to lead either a party or the country. In Rahul Gandhi's case that was an easy target to be achieved, but Modi still went all guns blazing at him. In April, referring to Rahul, he had said, "“But on the other side, there is a player whose mind doesn’t move away from childishness. Such an important election about the country’s future but for ten days, a word that gripped him was ‘balloon’. For ten days he kept repeating it. However, children don’t stick to a toy for too long and now he has caught the word ‘toffee’.

It has to be noted here that when he set the ball rolling for the general elections campaign in late 2012, Narendra Modi too was at his abrasive, outrageous best taking relentless personal potshots at rival party leaders. He mellowed down significantly towards the end as it became evident that an anti-Congress wave has been suitably put in motion. Maybe his leaders are just trying to follow in his footsteps. It's another thing that they lack both the wit and the finesse of Narendra Modi.