Left alliance's Aejaz Ahmad Rather won the General Secretary's post with 2,426 votes, while ABVP's Ganesh Gujar had to settle for 1,235 votes. The Left won by a margin of 1,193 votes.

ABVP's candidate for the post of the president, Lalit Pandey, said that they are taking the results as a win. Talking to News18, he said, "This is the win of our will. The Left had to form a coalition to defeat us. They had to come together to fight us."

Till now, 4,709 votes have been counted and the Left alliance is leading in all central panel posts.

Left alliance candidate for the post of the president, N Sai Balaji, said that they will fight against fund cut and seat cut if they win the elections. "Last year, we organised multiple protests against seat cut and reservation cut. However, we were attacked by the Delhi Police for the same," he added.

"The people who accuse JNU of harbouring anti-national sentiments are themselves working against the country," he said.

Till now, 3,931 votes have been counted out of the more than 5,000 votes polled. So far, the Left alliance (SFI-AISA-AISF-DSF) is leading on all central panel posts.

This year the counting process witnessed high drama. Some supporters barged in and broke the window of the School Of International Studies ( SIS ) building, where the counting process was taking place. The supporters were alleged to be part of the Akhil Bharatiya Vidyarthi Parishad (ABVP). However ABVP denied these charges and alleged the Election Committee to be involved in rigging elections in favour of the Left Union.
In a statement ABVP alleged that counting of the central panel started without informing their counting agent. The election committee in turn said that announcements were made to call out the counting agents before the ballot boxes seal were broken. The bashing at the counting centre took place around 4 am on 15 September, six hours after counting began. The counting was halted for almost 15 hours after the violence and was finally resumed at 7:30 pm.
By Rahul Satija/101Reporters
07:52 (ist)

#JNUSU_Election2018 #JNUFightsBack
This is more than a victory of the united Left, it's the victory of JNU students over a united Sanghi nexus out to abuse, demean, humiliate & destroy not only JNU but academics, activists, universities! pic.twitter.com/HdFpIHc2s5

Left alliance's Aejaz Ahmad Rather won the General Secretary's post with 2,426 votes, while ABVP's Ganesh Gujar had to settle for 1,235 votes. The Left won by a margin of 1,193 votes.

AISF, part of the Left alliance, is getting ready to celebrate as Left leads in all central panel posts. 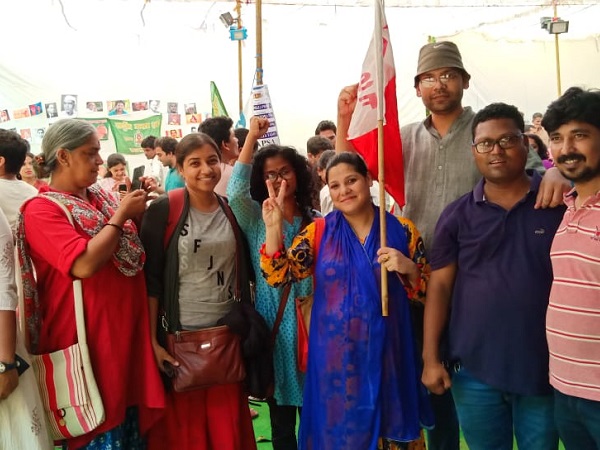 Left alliance's candidate for the post of the president, N Sai Balaji, has vowed to fight against fund-cut if he wins the polls.

RECAP: Counting was suspended for about 14 hours on Saturday

There was high drama on Saturday as counting was suspended for close to 14 hours after the ABVP staged protests claiming it was not informed about the start of the counting process. The counting, which was suspended at 4 am, resumed at 6.30 pm after two teachers from the Grievance Redressal Cell were appointed as observers for the exercise, officials said.

As per the latest update, Left alliance candidate N Sai Balaji is ahead of ABVP in the presidential run with 1,948 votes, while the latter has only 875 votes. Till now, 4,709 votes have been counted out of the more than 5,000 votes polled. So far, the Left alliance (SFI-AISA-AISF-DSF) is leading on all central panel posts.

Nidhi Tripathi, last year's presidential candidate from ABVP, accused the Left alliance of indulging in violence. She said, "Supporters of the Left Union threw the barricade outside the SIS counting centre. Due to the chaos they created, a security guard got hurt on his leg. And the ABVP supporters helped him in getting the proper medical facilities." She also alleged the election committee was biased against the ABVP.

To keep the counting transparent, constant announcements are being made about the total vote count and the specific vote share for each candidate. This procedure is very different from the recent DUSU elections where no initiative was take to ensure transparency.

Counting of votes in the JNU students union polls was suspended for over 14 hours on Saturday by election authorities citing "forcible entry" and "attempts to snatch away ballot boxes" at the counting venue, after the ABVP staged protests claiming it was not informed about the start of the process.

The counting, which was suspended at 4 am, resumed at 6.30 pm after two teachers from the Grievance Redressal Cell were appointed as observers for the exercise, officials said.

The counting process was stalled after Akhil Bharatiya Vidyarthi Parishad (ABVP) which is the student wing of the Rashtriya Swayamsevak Sangh (RSS), staged protest alleging they were not informed about the process.

The JNU Election Committee said "the counting process, which began on 14 September at 10 pm has been suspended due to forcible entry into the counting venue and attempts to snatch away the sealed ballot boxes as well as ballot papers from our counting centres." The Left outfits alleged that the ABVP was involved in the violence but the saffron outfit denied it.

The deadlock at the Jawaharlal Nehru University persisted till evening with the ABVP accusing the election authorities of bias towards the Left outfits and threatening to move court.

The Election Committee, however, issued a statement saying it had made announcement for counting agents to come and was following the rules.

It said, "A malicious lie is being spread on social media and among students that the Election Committee had not made three announcements and went forth with the entry of the counting agents for post of Central Panel for combined schools and Special Centres."

The Election Committee would like to clearly state three announcement calls were made (with the third call announced as the last and final call) and communicated to the students gathered outside the counting venue) via loudspeaker, the committee said.

"After that the election committee members informed the security guards about it and asked them to gather any counting agents.

As per the established norms, no new counting agents can enter the counting venue, once the seal of the boxes is opened.

"Election Committee (EC) had to reject the request of new counting agents being allowed inside that respective counting venue. Few students had forcibly entered the building and reached the counting venue, thus we had to suspend the counting process," it said.

The panel also claimed that their members, including women, faced intimidation.

President of ABVP-JNU unit Vijay Kumar said they will not hesitate to approach the Delhi High Court if they do not get justice.

"Counting of votes is being done without adhering to the rules. The EC is not following even the bare minimum requirements of election procedure.

"The biased way of handling elections has put a question mark on EC's neutrality. We have approached the Grievance Redressal Cell to seek justice. We will not hesitate to proceed to Delhi High Court if we don't get justice," he added.

The Grievance Redressal Cell is a body comprising the varsity's professors which addresses election related complaints.

In the evening, it was announced that the Cell has appointed two observers for the counting if votes.

The ABVP claimed their counting agent was not informed about the beginning of counting of votes polled in science schools.

The Left bloc claimed that "around 4 am, ABVP broke the glasses of the School of International Studies building".

They also claimed the ABVP counting agent was called but he did not turn up on time.

Kumar claimed their counting agent was not called and the counting process was initiated in front of the members of the Left outfit.

"We protested peacefully as the EC is biased towards the Left. We did not create any ruckus," he said.

The voter turnout in the keenly contested JNUSU election on Friday was 67.8 percent, believed to be the highest in six years. Over 5,000 students cast their votes.

Besides the Left bloc, there are candidates of ABVP, NSUI (National Students' Union of India) and BAPSA (Birsa Ambedkar Phule Students Association).

Technical glitches in EVMs had marred the counting process for Delhi University Students' Union polls on Thursday, leading to its suspension for close to three hours.