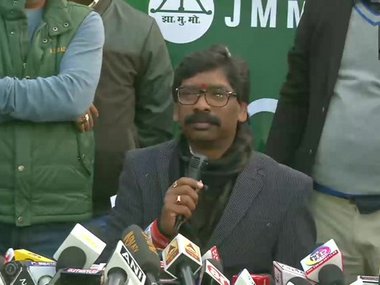 Jharkhand Assembly Election Result 2019 Latest Updates:  Jharkhand's outgoing Chief Minister Raghubar Das on Monday said the BJP's failure to cling on to the alliance with the AJSU party and the opposition parties' ability to keep their coalition intact are the reasons for the its loss in the assembly election.

Raghubar Das has submitted his resignation to governor Draupari Murmu.

Amit Shah, reacting to the Jharkhand Assembly election results, has said, "We respect the mandate given by the people of Jharkhand.

Current chief minister Raghubar Das has reacted to the results, saying, "It is my defeat, not of BJP."

"I thank the voters of Jharkhand for the mandate that they have given us. For me, this is a day to take a resolve to fulfil aspirations of the people," Hemant Soren said. He also said that a new chapter will now begin for the state.

According to the latest official numbers, chief minister Raghubar Das is trailing by 8,551 votes behind Saryu Roy.

BJP candidate Koche Munda has defeated JMM's Sudeep Guria in the Torpa Assembly constituency. Munda defeated Guria by 9,630 votes. JMM had won the seat in 2014. Based on current trends, JMM is leading in 29 seats while the BJP has won and is leading in 23 seats.

Chief Minister Raghubar Das has refused to concede defeat despite trends showing that the Opposition alliance is poised to touch the majority mark by itself. Das said, "When the complete result is out, you will see that the BJP will be able to form a government"

Raghubar Das is contesting against his party's rebel Saryu Rai, who has revolted against the BJP leadership after being denied a party ticket.

The JMM-Congress-RJD alliance has taken a lead in 40 seats. The BJP on the other hand is ahead on 28 seats. AJSU and JVM are ahead on five seats each.

Opposition chief ministerial candidate and JMM leader Hemant Soren just now lost both his leads in the constituencies of Dumka and Barhait. However, the Opposition may take some relief in the fact that it has managed to widen the gap between itself and the BJP in early trends. JMM-Congress-RJD are leading in 38 seats, while BJP is ahead on 30.

Jamshedpur East seat is throwing up a nail biting contest. Chief Minister Raghubar Das was trailing from the seat he has won five times in the past as BJP rebel Saryu Rai took lead on his expense. However, Das gained back the lead within minutes and currently maintains a slim lead against Rai.

Incumbent Chief Minister Raghubar Das is trailing in Jamshedpur East seat, according to early trends. Das is facing a tough challenge from none other than his party’s rebel Saryu Rai, who revolted against the BJP leadership after being denied a party ticket

Das is facing a tough challenge from none other than his party’s rebel Saryu Rai, who has revolted against the BJP leadership after being denied a party ticket, in this constituency

The counting of votes for 81 Jharkhand Assembly seats, which went to polls in five phases from 30 November to 20 December, started at 8 am today.

The Jharkhand Assembly Election Results will be announced on 23 December, when counting for the 81 seats which polled in five phases from 30 November to 20 December will hold.

The BJP is hoping to retain power in Jharkhand following setbacks and winning fewer seats in both the Maharashtra and Haryana Assembly election as compared to the 2014 polls in the two states. However, several of the NDA allies, including BJP's current Jharkhand alliance partner AJSU contested the 2019 Assembly polls on their own. Ram Vilas Paswan's Lok Janshakti Party (LJP) and the Nitish Kumar-led Janata Dal (United) also contested the polls solo. The Opposition Grand Alliance led by Hemant Soren's Jharkhand Mukti Morcha (JMM) and which includes Congress and RJD, however, is hoping to unseat the BJP. And two of the three exit polls have favoured the JMM-led alliance.

Times Now and India Today-Axis My India exit polls have predicted that the Opposition alliance is likely to storm to power while the ruling BJP is expected to be restricted to just 30 seats. However, the IANS-CVoter-ABVP exit poll predicted a hung Assembly, in which case smaller parties like the JVM(P), AJSU and Independent candidates are likely to play kingmakers in the tribal state. It is important to note that most of the BJP allies, including AJSU, LJP, JD(U) contested the election alone.

A poll of polls, however, predicted that the JMM-led alliance may just clear the halfway mark.

According to the Election Commission, the approximate voter Turnout for all 81 ACs across all phases of Jharkhand is 65.17 percent, which is less than the final voter turnout of 66.53 percent registered in the 2014 election.

The 81-member Jharkhand Assembly was held in five phases between 30 November and 20 December with the counting of votes scheduled to take place on 23 December.