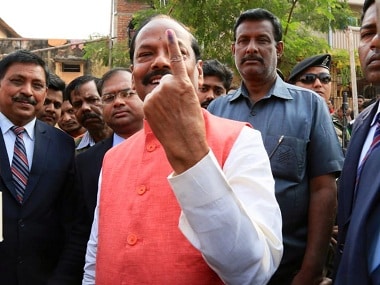 Jharkhand Election 2019 Voting Updates: At the end of the polling in 18 of 20 Assembly constituencies an estimated voter turnout of 59.27 percent was recorded. The highest turnout was in Sisai (68.6 percent).  Polling in Jamshedpur East and West will end at 5 pm.

After casting his vote in the second phase of the five-stage Assembly polls, chief minister Raghubar Das expressed confidence when he said that the BJP had been successful in establishing a better government in the last five years.

"I appeal to the people of the state to participate in this festival of democracy. I believe we have been successful in establishing a better govt in last five years for which we will be rewarded," said Das.

According to Election Commission, Jharkhand recorded a total voter turnout of 45.41 percent till 1 pm in the second phase of the five-stage Assembly elections in 20 constituencies across seven districts.

The highest voter turnout was recorded by Sisai at 54 percent even after polling was temporarily suspended in the seat due to clashes between police personnel and villagers. In the fracas, at least one person was killed and another was injured.

In a fracas that took place in Baghni village of Sisai constituency in Gumla district, one person was killed and another injured in police firing when voting was underway in the second phase of Jharkhand Assembly elections on Saturday, according to reports.

As per police officials, as many as 1,000 villagers gheraoed booth number 36 in the village and attempted certain "malpractices", like snatching weapons from the personnel.

Jharkhand DGP Kamal Nayan Choubey said that personnel of the Rapid Action Force (RAF) had to resort open firing, after few miscreants attempted to grab hold of their weapons and capture the polling booths.

An instance of firing has been reported from polling booth at Sisai Assembly constituency of Gumla district. According to NDTV, the shots were fired at the Government Vehicle of Block Development Officer.

Voting has been temporarily affected on the booth no 36 of the Gumla district. Police have reached the spot and the situation is being brought to normal.

The constituency of Jamshedpur East will arguably be the most keenly-watched Assembly constituency in the Jharkhand Assembly Election 2019, as Chief Minister Raghubar Das will contest from here. For the past five terms, the constituency has stood solidly behind Das, who has held this seat since 1995. In 2014, he defeated the Congress' Anand Bihari Dubey by a margin of 70,1577 votes.

The fates of Chief Minister Raghubar Das, Speaker Dinesh Oraon and ministers Neelkanth Singh Munda and Ramchandra Sahis will be decided in the second phase of polling in Jharkhand on Saturday.

The voting on Saturday will also see the BJP state unit president Laxman Gilua trying his electoral luck. They will be among the 260 candidates in the fray in 20 Assembly seats. Of them, 29 are women nominees and 73 are Independents.

The polling on Saturday will be second in the five-phase Assembly election in the tribal state.

The people will exercise their franchise between 7 am and 5 pm in Jamshedpur (East) and Jamshedpur (West) constituencies, while in the other 18 the time to cast votes will end at 3 pm, an EC release said.

This was being done to allow polling personnel to travel from the remote areas during shorter winter days to deposit the EVMs in the strong rooms, a government official said.

According to police, more than 42,000 security personnel, including central forces, have been deployed in the 20 seats spread across seven districts.

He said a total 6,066 polling stations have been set up in the constituencies going for polls in the second phase. Webcasting facilities will be provided in 1,662 polling stations.

A total 337 are model polling stations and 94 will be exclusively conducted by women, Choubey said.

The BJP is contesting in all the 20 constituencies going to the polls in the second phase, while the Opposition alliance of the Jharkhand Mukti Morcha and Congress are contesting in 14 and six seats respectively.

AJSU party, an NDA ally which is contesting the Assembly elections on its own for the first time since the creation of Jharkhand, has fielded candidates in 12 seats where polling will be held in this phase.

The RJD, which has got a total of seven seats according to the seat-sharing formula by the three opposition parties has no candidate in the second phase of polling.

The Jharkhand Vikas Morcha (Prajatantrik) has fielded candidates in all the 20 seats, while Bahujan Samaj Party is in the fray in 14 seats.

Six candidates of All India Trinamool Congress are also in the fray in the second phase.

The first phase had concluded on 30 November. The fifth and final phase of polling will be held on 20 December and counting will take place on 23 December, the Election Commission sources said.