Ishrat Jahan, one of the petitioners in the triple talaq case, has joined the BJP, the party's state unit general secretary Sayantan Basu said on Monday.

"Ishrat Jahan joined the BJP at our Howrah office on Sunday," Basu told PTI. Sources said Ishrat was felicitated by the Howrah BJP unit on Sunday and inducted into the party. 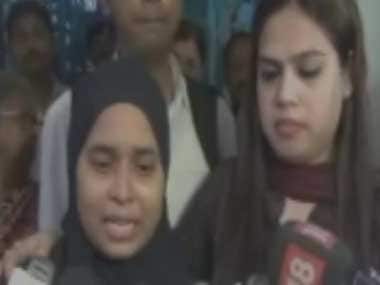 Jahan, one of the five petitioners in the case against instant triple talaq, had faced boycott from her community after the Supreme Court verdict, but that has not stopped her from continuing her fight. She said she would use the platform to work for all women, and not just Muslim women.

Basu said a state-level programme to felicitate her was yet to be organised. Ishrat was one of the five petitioners in the triple talaq case. Her husband had divorced her over the phone from Dubai in 2014 by uttering 'talaq' thrice.

Her decision to join the BJP has also ruffled some feathers in Bengal, but News18.com quoted her as saying that her mind was made after Prime Minister Narendra Modi took steps for the upliftment of Muslim women. The Bill that criminalises instant triple talaq has been passed in the Lok Sabha in the Winter Session. "He showed the resolve to solve our problems,” she said.

Slamming the current Chief Minister of West Bengal Mamata Banerjee, Ishrat said, "I am in Bengal, a state run by a woman. Despite the fact that our chief minister is a woman, nothing has been done for gender justice in my case and in the fight of Muslim women. I was fighting alone, there was no cooperation from any corner or from political parties," she said.

Even if women wanted to support her, she said “they were under pressure from patriarchy to not come out in my support.”

Thanking Modi for standing up for the rights of Muslim women, she said, “My husband and I separated in 2014, and then, one day he divorced me by sending a message. From then, my battle started. I was alone like many other Muslim women who were divorced like this. In such a scenario, the woman is always considered at fault. But we found support in the leadership.”

Her husband had divorced her over the phone from Dubai in 2015 by instant oral triple talaq. The controversial practice was struck down by the Supreme Court on 22 August.

West Bengal BJP chief Dilip Ghosh, who is touring various districts in the state, said he had also come to know from party sources that Ishrat had joined the BJP in Howrah.