India is 'ripe' for revolution, and Anna may be one ingredient

Ravi Batra is an Indian American economist and a professor at the Southern Methodist University in Dallas, Texas. Over the years Batra has made many predictions, some of which have turned out right. He correctly predicted the fall of communism in the former USSR and at the same time said it would continue in China. He also predicted an enormous rise in wealth concentration in the United States that would generate poverty among its masses. 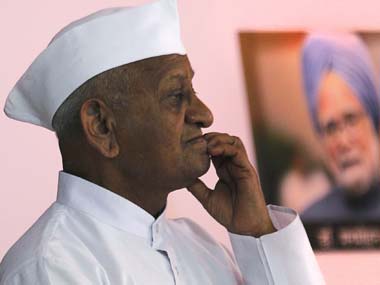 Anna Hazare during his fast at Jantar Mantar. AP

These predictions were made way back in 1978 in his book The Downfall of Capitalism and Communism. These, along with many of his political and economic predictions, have come true over the years (for a complete list click here). Batra uses the Law of Social Cycle to make these predictions. On the basis of this law he now predicts the rise of the Team Anna political party.

“Through long and painful fasting Anna Hazare has captured the attention of people, and finally decided to form a political party.  Indians will indeed vote for him or the candidates he supports,” says Batra. Batra is the author of many bestselling books like The Crash of the Millennium, The Downfall of Capitalism and Communism, Greenspan’s Fraud and most recently The New Golden Age. In this interview he speaks to Vivek Kaul.

What is the law of social cycle?

The law of social cycle was pioneered by my late teacher and mentor, Shri Prabhata Ranjan Sarkar. It can be explained in a variety of ways. Let’s start with a simple observation. A careful examination of every society reveals that there are three possible sources of political power --the army, popular ideas, or money.

Could you explain that through an example?

For instance, if we carefully explore the political landscape of our world, we find that in places like the United States, Western Europe, Canada, India, Australia and Japan, money rules society and super-materialism prevails. In places like Iran, the priesthood is dominant with control over religious ideas, whereas in Russia former intelligence officers such as the ex-KGB chief, Vladimir Putin, among others, hold the reigns.

In China, the communist party is supreme but the ultimate source of political power is the military, which established the party’s rule in a Marxist revolution in 1949. The Tiananmen Square massacre of 1989 clearly illustrates this point. When the Chinese government faced a serious challenge to its authority, it is the army that restored order in the country and crushed the opposition to communist rule.

So what does this suggest?

This suggests that there are three main sources of political power—the military, human intellect, and, of course, money or wealth. Religion may also bring power, but priests dominate society by mastering scriptures and rituals. In other words, they also utilise their intellect to control and influence people. Thus, ultimately political power or societal dominance stems from three sources—physical strength or skills, human intellect or intellectual skills, and the hoarding of wealth.

As a result, through the pages of history, we find that a society is sometimes dominated by warriors, sometimes by intellectuals (including priests), and sometimes by acquisitors who are experts in making money. However, the law of social cycle goes a lot further than merely describing the three classes of people.

Could you explain that?

It analyses the evolution of civilisations and states that a society evolves in terms of a cycle wherein a  nation is first dominated by a group of warriors, then by a group of intellectuals, and finally by a group of wealthy acquisitors. Then towards the end of the age of the wealthy, there is so much corruption and crime that people get fed up and revolt against the elite or the rulers, who are overthrown in a social revolution. Since it takes a lot of courage to revolt against the authorities, the successful revolutionaries are the true warriors, who start another warrior age and bring an end to the corrupt rule of money. This way the social cycle begins anew and moves along in the same succession of warriors to intellectuals to acquisitors and then to the social revolution.

Since when has this cycle existed?

The social cycle has existed since the birth of human society and its validity can be proved by written history and the logic of social evolution. For instance, in India, around the times of  the Mahabharata, warriors dominated society; then came the rule of brahmans or intellectuals, followed by the Buddhist period, when capitalism and acquisitors were predominant; this era ended in the flames of a social revolution, when a great warrior named Chandragupta Maurya put an end to the reign of a king named Dhananand, and started another age of warriors.

What is interesting is that  India's overwhelmingly powerful caste system, wherein the brahman is placed atop the social hierarchy followed by kshatriyas, vaishyas and shudras, was not able to thwart the law of social cycle. There were times when in practice, though not in theory, the brahman accepted the supremacy of people belonging to other castes. During the Buddhist period, for instance, the vaishyas were treated with great respect. They were called shreshthis, meaning "superiors." In today's acquisitive age, of course, we clearly see the priest eagerly and humbly accepting money from the rich regardless of their caste.

What happened after Chandragupta Maurya?

Reverting to the cycle, the Mauryan age of warriors was followed by another age of intellectuals in which the kings themselves claimed to be brahmans. The latter period was followed by feudalism, representing the age of acquisitors. Later, the feudal landlords, sometimes called rajas, were overthrown by an illustrious warrior, named Samudra Gupta, who thus organised another social revolution against the rule of acquisitors. Some historians have called the Gupta king the Napoleon of India, because he destroyed the armies of a large number of landowners and brought the wealthy under control.

And the age of Samudragupta was followed by?

The Gupta warrior era gave way to another intellectual era in the 9th century, when a renowned ascetic named Shankaracharya revived brahmanism and uprooted Buddhism from the land of its birth. Priests and prime ministers dominated again, but their influence waned in a few hundred years and gave way to another round of feudalism, which was followed by yet another age of warriors, this time under the rule of Muslim invaders. Thus began the Muslim warrior era during the 14th century and continued as the Mughal empire in the 15th. Akbar the Great was the most illustrious emperor of this age, which lasted for a while and then gave way to another intellectual era, this time under the dominance of Muslim priests or Ulemas, who held sway over the Mughal king Aurangzeb. Around these times the great warrior Shivaji founded the Maratha Empire, which, after his death, came under the influence of brahmans known as Peshwas. At the same time, the northern Mughal Empire came under the sway of its wazirs or prime ministers. Thus this Mughal-Maratha period was the latest era of intellectuals, which was followed by yet another era of acquisitors, when the British took over around 1800. India has been in this age ever since. Indians will indeed vote for him or the candidates he supports

So what is the point that you are trying to make?

The main point is that no class remains in power forever, and that the acquisitive age always ends in a revolution. Such was the case in all civilisations. In fact new revolutions are already taking place in the world. Muslim society, where Saudi oil wealth is the main source of power, is also in the age of acquisitors, as is much of the planet. Rebellions have already occurred in the Islamic nations of Tunisia, Egypt, Libya and Yemen, and now Syria is facing the same fate. The Syrians have shown admirable resolve, and even though unarmed or heavily outgunned they are revolting against their ruler, President Assad.

What about the current state of affairs in India?

Courage is contagious and gradually inspires the masses to fight tyranny. The wave of courage that has dethroned many Muslim rulers is now budding in India under the guidance of Anna Hazare and Baba Ramdev.

The movements they have started are still in the early stage but such movements are likely to grow and ultimately succeed in their mission to rid the nation of political corruption, because the age of acquisitors is about to end around the globe. Who could have imagined just a few years ago that Egypt’s Hosni Mubarak and Libya’s Colonel Gaddafi would be overthrown by their people?

Yes, you are right…

A revolution doesn’t occur overnight, but when it starts it engulfs the nation in a mighty wave that crushes the ruler. It is initiated by small groups that have been opposing corruption for a long time, and for a while it faces public apathy and even opposition, but when the right moment comes it ignites the people to decimate the elite.  The current decade is likely to be the decade of revolutions that will consume the ruling classes around the planet.

The revolutionary wave began in the Muslim world and it is bound to spread in all areas where the acquisitors are dominant, because remember that courage is contagious. India gained independence in 1947 and so did many other countries within a few years. The point is that when a revolutionary wave begins in one area, it unleashes a flood that engulfs the neighbours. The moment has arrived to dethrone the corrupt acquisitors, and someone has to seize the moment to feed this flame. Anna Hazare and Ramdev are doing it and they deserve the support of moralists around the world.

But how do you see the current rule of wealth being overthrown in India?

The rule of wealth in India will end through the electoral process, because people will vote for those who vow to end corruption. Through long and painful fasting Anna Hazare has captured the attention of people, and finally decided to form a political party.  Indians will indeed vote for him or the candidates he supports. Although, some of his followers will be unhappy with his decision to enter the political fray, this is the right thing to do. As Mahatma Gandhi demonstrated, fasting alone is not enough to achieve a desired goal. You also have to offer a concrete and credible alternative.

The social revolution against the acquisitors has started in Muslim society and is slowly gathering steam in India and the United States. By the end of this decade, if not sooner, the age of acquisitors will be a thing of the past, and those with courage to oppose the elite will start a new age of warriors, because courage is the chief hallmark of a person of warrior mentality. Today, an acquisitor’s democracy prevails in most nations; in the near future it will give way to a warrior’s democracy, where money will not be needed to win an election.

So how do you see this new age that you are predicting?

During the Buddhist period preceding Chandragupta’s ascension kings were elected in some areas of north India. That was an example of warrior’s democracy wherein a person’s martial skills, not wealth, brought him the high office. Similarly, in the future a candidate’s military background could be important in his rise to power. Whoever brings about the new warrior age will also give birth to a new golden age.