In Rampur, SP is banking on the Azam Khan effect

Rampur: Days ahead of polling in the Western Uttar Pradesh district of Rampur, its most recognised politician Mohammad Azam Khan finds himself in the highly inconvenient predicament of being restricted to his the party headquarters. 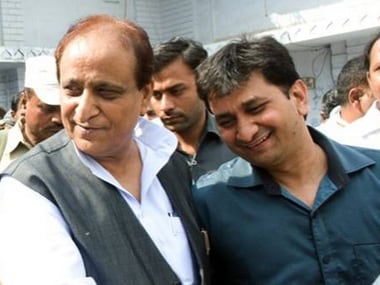 The Election Commission ban on Khan from holding rallies in Uttar Pradesh for his ‘highly inflammatory’ campaign speeches has dealt a crippling blow for the Samajwadi Party (SP) which is banking heavily on the senior politician to retain the crucial Muslim vote in the poll-bound constituencies of Rampur (49.1 percent Muslim population), Moradabad (45.5 percent), Bijnor (41.7 percent), Amroha and Bareilly.

Referred to by residents of Rampur city as 'mantriji', the seven-time MLA and cabinet minister in Akhilesh Yadav’s government, seems to enjoy almost a cult status here. Judging by reactions of supporters hanging around at the party headquarters, Khan’s controversial speeches and his confrontation with Election Commission seems to have added to his larger-than-life persona.

Locals say Azam Khan has changed the face of Rampur City and credit him for his developmental and social initiatives. Khan is spoken of with reverence and few openly criticise him.

“We have our mantriji, Azam Khan saab. We have hopes from him. Inshallah his party will win again,” says Mohammad Usman who works in a welding shop on Diamond Street in Rampur city. The contest, says Usman, in Rampur is between the SP and the Congress party here.
But a common refrain on the streets of Rampur city, where Khan’s popularity is the highest, that “voters in Rampur are keeping surprisingly silent about their decision” suggests that not all is hunky dory in Khan’s backyard.

The SP government’s failure to effectively handle the Muzaffarnagar riots and the over 200 instances of communal violence in Uttar Pradesh in 2013 has left the party’s previously unchallenged hold over the Muslim community in serious doubt.

And locally, Khan’s decision as minister to crack down on the illegal plywood business has left some voters angry.

Says Pappu, a mechanic, “People are completely silent here. You may see a lot of flags of the Samajwadi Party. That is because people are scared of mantriji. There is no saying who will win in this election…Development is being thwarted here. The Congress may not have done anything for us but at least it didn’t destroy livelihoods of people. About 1 lakh people working in the wood business are without a livelihood today because factories have been shut down.”

Local reporters say that while Khan’s is influential in the city, his hold over Rampur’s rural areas, which is where majority of the voters live, is uncertain this time. They say the Congress, which has won the seat nine times in the past, could gain from the disenchantment of the Muslim voters with SP.

For Khan, winning Rampur is a matter of prestige and he has handpicked the candidate for the job. Nasheed Ahmed Khan, a former member of the Uttar Pradesh Minorities Commission, is considered a close and long-time aide of Khan.

Nasheed is quick to dismiss the possibility of a backlash of the Muzaffarnagar riots against the SP, calling it a ‘conspiracy.’ Criticising the EC decision to ban Azam Khan’s rallies in the state, Nasheed Khan says, “Even a murderer is given a chance to explain himself. They took the decision even before reading Azam Khan’s response.”

But the ban on Azam Khan, the SP candidate insists, will benefit the party. “The decision to ban Azam Khan has added to our votes. People feel that their voice being muzzled. This is the truth.”

Calling the contest in Rampur as one between the SP and the BJP, Nasheed Khan said, “The Congress is nowhere in the picture. People feel the party has done nothing for them.”

All the major political players in Rampur, except the BJP, have fielded a Muslim candidate. And the top challenger to SP for the Muslim vote, says residents, is the Congress party.

Dismissing the possibility a division in the Mulsim vote, Nasheed Khan says, "There is no division. People are with Samajwadi party. There may be a small percentage who are influenced by the Nawabi family but there is no significant division of the votes. Rampur was in the hands of the Nawabs. Nine times members of the Nawab family were elected as Congress MPs but where is the development?”

The Congress, which has always banked on the star quality of the local royal family, has pitted Kazim Ali Khan, the titular Nawab of Rampur, against SP”s Nasheed Khan and BJP’s Naipal Singh.

Popularly known as Naved Miah, he is the son of Zulfiquar Ali Khan and Noor Bano - both of whom have been Congress MPs from Rampur. Incidentally, the five-time MLA who has fought and won elections for all three (Congress, SP and the BSP) parties, has never lost an election.

Sounding confident of pulling of a victory from under Azam Khan’s nose, Kazim Ali Khan says, “I’m fielded against three political stalwarts. In SP, I am fighting the minister (Azam Khan) in proxy. In BJP, I’m fighting Modi in proxy and BSP I’m fighting Mayawati proxy. All three candidates are 80-plus. One cannot expect a vision from them for the youth.”

Asked why he was so confident, Kazim Khan says, “Most of all, in Rampur district, it is less of a Modi-wave and more an anti-Azam wave. People are petrified, terrorised by him. You go into the bazaars, you will see SP flags, but people are voting Congress. That is the kind of fool’s paradise Azam lives in.”

He argues that Azam Khan’s policies as minister have cost him the votes of farmers and labourers who make up the majority of the rural population of Rampur. Mincing no words in attacking Azam Khan on Muzaffarnagar riots, the Congress candidate says, “People know he is responsible. I make no bones about it. Azam was responsible for instigating the riots.”
Is the Congress then banking on the ‘anti-SP wave’?

“It is a mixture. It is not anti-SP wave, it is an anti-Azam. Also, people want a change. They don’t want people from another generation. My strength is the youth.”

Responding to a question on the possible division of Muslim vote and advantage it may give the BJP, Kazim Khan says, “In my last assembly election, there were 14 Muslim candidates and one Hindu candidate. The BJP believed they were going to win. And there was a Samajwadi wave. Congress didn’t have any popular base in the state. I fought against it all and won by 14,000 votes. In fact, it has been a trend in all my five elections that the BJP has always come second. And in this election too, the BJP is going to my main political opponent.”

BJP’s decision to put up the lone Hindu candidate from Rampur has led to speculation that the party is banking heavily on polarisation of votes. The polarisation is so strong, say some voters, that there is a possibility of the Dalit voters shifting from the BSP, which has never won a seat from Rampur, to the BJP.

Says Mohammad Amil, a businessman. “The BSP vote is getting diverted to BJP in Western UP. The electorate has become polarised. This time the issues is not party-based. It is the communal issue that is dominating the election. And if polarisation succeeds BJP can win,” says Amil.

Steering clear of any talk of ‘polarisation’ the BJP insists it is banking on the ‘clean image’ of its five-time MLC Naipal Singh to attract voters.

BJP local unit member Rajeev Manglik says, "There is no question of polarisation. Mukhtar Abbas Naqvi has won in the past as our candidate from here. This time because of his national responsibilities he wasn’t able to contest from here. We haven’t put up our candidate with the intention of benefiting from the division of the Muslim vote. Our issue is development and to provide a corruption-free government."

Asked who the BJP saw at is principal opponent in Rampur, Manglik said, “We don’t see any contest. The contest is for the second place between the SP and the Congress.”

Defending BJP leader Amit Shah (who like Azam Khan has been banned from addressing rallies in UP for his inflammatory campaign speeches), Manglik said, “Regional parties are the ones who are poisoning the environment because they don’t have a development agenda. Amit Shah didn’t say anything wrong. Those who are guilty have no religion. All Amit Shah said was that if you have been wronged you have the right to protest with your vote. We don’t know why he has banned. Amit Shah and BJP campaign is very strong and it is going in the right direction.”

The vote for BJP in Rampur, says Manglik, will be for Modi. “I have no hesitation in saying vote that vote is being cast for Modi.”

Giving his take on the political contest in Rampur, Parminder, a marketing professional says, “Naipal Singh is not very well known. He will have to struggle. As far as Modi factor is concerned, it is not as if every seat that the BJP is contesting will be won in Modi’s name. Nasheed Khan of SP has been with Azam Khan for a long time and people relate to him because of that. Of course, Azam Khan has always been controversial. Yes, what he said was wrong and he is facing the consequences. But he knows the mind of Rampur. He has a lot of support here. And Naved Miah’s who is a Congress MLA has a good hold in constituency but but his mother’s reputation as Rampur’s MP might damage his chances.The way I see it, it will be a contest between the Congress and the SP in Rampur.”