The title — a play on the first few words of Jawaharlal Nehru's first speech post Independence — is likely a tongue-in-cheek disavowal of the Bharatiya Janata Party's (BJP) insistence on Nehru's culpability in India's everyday failings.

Some of the key points of Congress manifesto for the Lok Sabha election 2019 were: 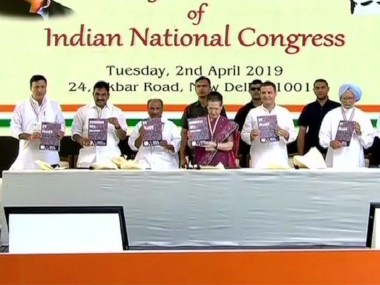 1)  Rahul announced that the first point of address in the Congress's manifesto would be the much-discussed NYAY scheme. "Let us try to find the truth, I told the manifesto committee. As it is we have a prime minister who lies to us everyday. Narendra Modi's promise of Rs 15 lakh in every account has not happened. How much money can the Indian government give to the accounts of the poor, I asked them? They told me Rs 72,000...This will secure two things. For the first time, the poor will get a direct transfer of cash. Secondly, the economy that had been jammed by the Narendra Modi government with measures like demonetisation, would be recharged," the Congress president said.

2)  The second theme in the manifesto is jobs. "I have come to know that 22 lakh government jobs are lying vacant. These, I promise, will be filled by March, 2020. Ten lakh youth will be given jobs in village panchayats. For entrepreneurs, we will have a three-year window where new businesses will not require any permission. We will bring jobs to India, so we will open the banks for new businesses," Rahul said. He added that the National Rural Employment Guarantee Act, "which the PM had called bogus" will increase the promise of work under the scheme from 100 to 150 days.

3)  Rahul significantly announced a separate budget for Indian farmers, "to let them know for certain how much money they are getting, exactly how much of their loans are being forgiven". He also added that crorepatis take bank loans and default often. "Anil Ambanis and Mehul Choksis steal from banks and run away. Farmers are honest, when they take bank loans and fail to repay them, they are thrown in jail. We will not regard farmers' loan defaults as criminal offences any more, but will see them as a civil offence now," he said.

4)  Six percent of the Gross Domestic Product will go to education, universities, colleges, IITs and IIMs, according to the Congress manifesto. "We will try to make the best institutions accessible to all," Rahul said.

5)  Healthcare was the last highlight of Rahul's address. "The point of the current health scheme brought by this government has been to take money from people and put it into pockets of private insurance players. We will give the poor high-quality medical attention," he announced.

Rahul also delineated an additional concern, that of national security. Referring to the recent border incursions, Rahul said that the casualties have risen in the last five years. "Congress will bring the country together. National and internal security, we will make sure both are restored," he said.

Significantly, the manifesto has promised a revision of the Armed Forces (Special Powers) Act, 1958 in order to strike a balance between the powers of security forces and the rights of citizens. The party has also promised to repeal the sedition law and the Citizenship Amendment Bill introduced by the BJP, stating that it has become "redundant".

Rajeev Gowda, convenor of the manifesto committee, said the party was given a "very simple mission statement" by Rahul — to go out and listen to the voices of the people of India. "We constituted 20 different sub-committees across a range of topics and reached out to people. Our outreach covered 24 states, three Union Territories and saw a total of 121 public consultations, including one overseas sitting at Dubai to look at non-residential Indians' concerns," Gowda said.

Four crore jobs were lost, the former finance minister went on to say. He also highlighted farmers' plight and the security of women, announcing that these three make up the theme of the manifesto, which focuses primarily on wealth and welfare.

Speaking before the launch, Manmohan Singh said the manifesto points to ways in which "prosperity and productivity" go hand in hand.

In the post-launch interaction with media, Rahul took to walking around on the dais, fielding questions, most of which pertained to whether he was the Congress's prime ministerial candidate to which the party president said: "The people will say." When asked about Opposition's reaction to his decision to contest from Wayanad, Rahul said, "BJP can't hide behind hollow narratives."

Rahul also blamed reporters for not asking tough questions to Modi. "You all drill me with questions but are afraid of taking on Modi ji. He has never ever addressed a press conference so far, why don't you ask him why is he so afraid of talking to the media," Rahul asked. He also said he was ready for an open debate with Narendra Modi on national security.

Who is campaigning where? Click here for Lok Sabha Election TRACKER