High stakes, and opportunities, for India in post-Gaddafi Libya

New York: A nascent Libyan democratic republic, with luck, political acumen and lucrative oil revenues, could form part of a new arc of stability across North Africa. Britain and France, the powers that played a leading role in the military campaign that sealed Muammar Gaddafi's fate, will naturally enjoy first dibs on lucrative Libyan oil contracts. But it would be a good idea for India to continue assisting Libya as the country represents plenty of promise, experts said on Thursday. 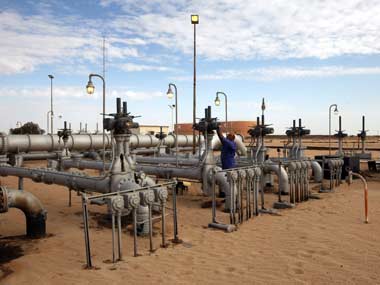 "The stakes are high as there are thousands of Indian workers in Libya who were in jeopardy for a while due to the six-month civil war and the uncertainty about Libya's future," South Asia expert Sumit Ganguly, who holds the Rabindranath Tagore Chair in Indian Cultures and Civilizations at Indiana University, toldFirstpost. "India also has oil prospecting and business interests in Libya. This gives India significant stakes in the country

According to Western news agencies, European oil companies - especially French and British - are expected to gain ground in Libya, while the Russian and Chinese oil companies might be asked to revise the contracts they signed with Gaddafi.

In September, India hedged its bets by supporting Libya's National Transitional Council (NTC) led by Mustafa Abdel Jalil. It also routed $1 million in aid to Libya through the United Nations. When the Western powers sought to get international sanction to mount pressure on Gaddafi in March, China preferred not to use its veto and chose to abstain. India, China, Russia, Brazil and Germany abstained on UNSC resolution 1970 and 1973 that started the NATO action in Libya. China was the other late supporter of the NTC.

"To wait until September showed an excessive degree of caution. It is only after criticism mounted that India finally decided to bite the bullet. They could have done so somewhat earlier but there was a bit of waffling on India's part," said Ganguly.

About 75 Chinese companies operated in Libya before the war, with about 36,000 workers implementing nearly 50 projects worth billions of dollars. Indian interests in Libya are substantial but smaller than China's.

"India needs to be very decisive here and view Libya as an opportunity in itself and also as a touchtone for its macro strategy in the region," Krishna K Gupta, partner in Massachusetts-headquartered Romulus Capital, told Firstpost. "Libya accounts for a minute percentage of India's oil imports right now but that could increase. Certainly, India's neighbour China will be trying to get a piece of the pie. India has an opportunity to get more of the pie on oil imports. Within Libya you have both an employment opportunity and a resource opportunity."

"On the macro level, too, North Africa is important for India," Gupta added. "India lost the race in much of Africa to China which was the first mover. North Africa represents a unique piece of Africa because Indians have had historically strong cultural ties with the Arab world. North Africa bridges the Arab world with Sub-Saharan Africa so there is no reason why India shouldn't be more involved with Morocco, Tunisia, Libya and Egypt. If India plays an active role in post-Gaddafi Libya it can become more engaged with the region. Economically and politically it is an agenda India should pursue. If they don't, someone else will. It is high stakes that they need to take on."

A strict observer of the Koran, Gaddafi outlawed drinking, brothels and gambling casinos when he came to power in an effort to "Arab-ise" Libya and rid it of Western influences. Gaddafi once offered cash to the outlawed Irish Republican Army if its members would renounce Roman Catholicism for Islam. But Islamic fundamentalists despised Gadaffi almost as much as the West did.

India is interested in ensuring that something resembling Egypt's Muslim Brotherhood doesn't come to power in Libya. "Gaddafi was not a particularly savory individual, but at least he wasn't interested in promoting Islamist forces," said Ganguly. "He used Islam for his own particular end but he was not interested in the kind of revolutionary fervor that Iran's Ali Khamenei and his predecessor Ayatollah Khomeini were interested in. That's why India had a working relationship with Libya."

India, he added, remains concerned that Islamist forces or parties don't come to power in Libya.