The HC has sought a response from the government by 4 April.

The case came up for hearing before a division bench comprising Justice AK Mittal and Justice Raj Rahul Garg.

The matter pertains to Shikohpur land deal in Gurgaon between Skylight and DLF. 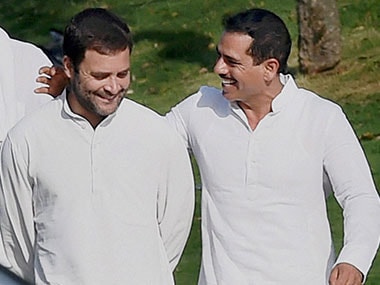 A file photo of Robert Vadra and Rahul Gandhi. PTI

The firm has challenged a notice by the excise department of 12 October, 2015 under section 16 of Haryana Value Added Tax (VAT) Act, 2003.

The firm has also sought a direction to respondents not to proceed further with the assessment proceedings until the complete relevant information or records were provided to it by the department.

The sale deed for the 3.53-acre land deal between Vadra’s firm and DLF Limited took place on the payment of stamp duty and other statutory charges in 2012.

The firm has submitted that it had not sold the licence and only transferred the licence of commercial colony to DLF after the government permission.

The Court was told that upon receiving the VAT notice, the firm made various representations to the department to
provide records submitted by the Town and Country Planning department pertaining to the land deal and the assessment by the department that the company sold the licence to DLF for Rs 58 crore.

Representations were submitted on 26 October, 3 November, 27 November and 12 December, but it has not provided complete information, the HC was told.

Without mentioning the name of Robert Vadra, it has been stated, that in the run-up to parliamentary elections in
2014 and later Haryana assembly elections, frequent "unsubstantiated allegations" were levelled against one of the
directors of the petitioner company as part of the "systematic vendetta".

In furtherance of the vendetta against the petitioner company, the October 2015 notice was sent, which the firm has
claimed, was based on "wrong facts" and "perverse interpretation" of law and facts.