Speaking to ANI, Badal slammed Sidhu for taking credit for the construction of Kartarpur corridor and said, "Sidhu was a state guest from Pakistan's side (during foundation stone ceremony), where Pakistan's prime minister invited him to fight elections from his country. It is very clear that what kind of compromises took place between them, since today even after the attack on our Jawans, Sidhu is still speaking Pakistan's language and asking his own armed forces of proof, same as the neighbouring country." 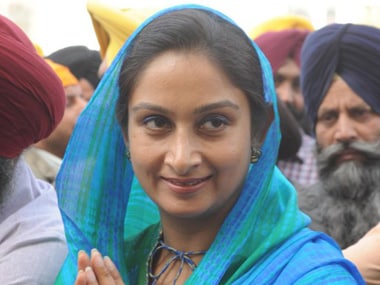 "How in (hand-in-glove) he is with Pakistan's army general and prime minister, the world knows. The corridor wouldn't have been possible without Modi government taking prompt decisions. Sidhu can say what he wants, he is a Pakistani agent, and he obviously has to speak about Pakistan," she added.

Badal also lambasted former prime ministers of Congress and blamed them of working against the causes of Sikhs. "If Punjab was divided, it was Jawaharlal Nehru's decision. The Gurudwara which is three kilometres away, it could have been in India. After Nehru broke Punjab, Indira Gandhi came and attacked the Golden temple. Rajiv Gandhi for his political reasons massacred millions of Sikhs all over. Now, Rahul Gandhi speaks the language of Pakistan," she said.

"Congress party has always been anti-Sikh and anti-Pakistan. Congress and the Gandhi family have always gone against us. God forbid if some other government comes all Sikhs who vote for Congress will be responsible that this corridor doesn't become reality. They are doing everything to derail it," alleged Badal.

Alleging further that since the "Congress partitioned India, it was the people of Punjab that bore the maximum brunt of the state being divided," she added, "The maximum amount of blood was also shed at our borders. But the Congress not even take care where the Sikh religion starts from. They were just a few kilometres across the borders, to make the borders of the country such that we have access to at least our own shrine."

She also credited the Narendra Modi-led Central government for fulfilling the long-standing demand of Sikh community by paving way for Kartarpur corridor and said, "Since 2014, Shiromani Akali Dal has been saying that this is 550 years of Guru Nanak Dev, we must have a corridor. I am grateful to Prime Minister Narendra Modi, who took such a historic and decisive step. Congress even made a Sikh prime minister, but he could not make a single step. Our government not only started it, but within one month allotted the work and now land acquisition is going on, and despite all the tension the talks are going on."

The Union Minister also said that Kartarpur is a corridor of peace and is going to harbour good time in future and improve relations.

She also said that Pakistan's propaganda is not going to work as the people of Punjab can see through it. "I am not apprehensive, I have full confidence in the people of our state who have gone through dark days of terrorism, that no matter what Pakistan wants to spread our people are not willing to touch them. I have full faith and confidence in our armed forces will be able to handle this," Badal said.

On demand of visa-free and passport-free access in the corridor, she cited the concerns of government and said, "All these discussions will take place. Everyone wants it must be full proof and secure. For the Sikh community, the prime importance is that we will finally have access to the Gurudwara to bow our head. Tensions and borders will not come in way to our faith."

On 8 March, Congress leader Navjot Singh Sidhu had hit out at the Centre over the air strikes carried out recently and said the government is "not able to discern between trees and structures," despite there being 48 satellites. Sidhu's remark comes as images have surfaced of the area the IAF struck on 26 February, targetting terror launch pads in the region.