Panaji: The malaise of using the media to carry out internal house-cleaning by political parties isn’t a trend limited to the Bharatiya Janata Party (BJP) alone. Even as several cabinet ministers in the National Democratic Alliance (NDA) are on the back-foot, following media reports suggesting alleged indiscretions by them or their kin, it seems that a local English daily in Goa and not New Delhi’s 10 Janpath or 24 Akbar Road, may well decide who the next state Congress president is likely to be. 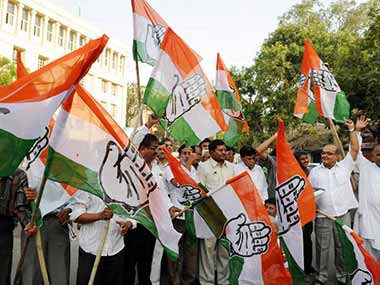 Congress might be going through an internal row in Goa. AFP

The story said that Gandhi, as Congress president, had signed on the file to sack John Fernandes late on Saturday. It also said that while no replacement had been named, “AICC general secretary Luizinho Faleiro is likely to be named as the new GPCC president."

Reacting to the news report, the Congress' state unit issued a statement on the same day complaining of "paid news”.

“Kindly ignore the paid news which has appeared as a headline in one of the English local daily with regards to sacking of Pradesh Congress Committee president (John Fernandes). The news is totally baseless. We would be initiating legal action against this reporter of the daily,” the GPCC statement read. On the next day, Fernandes, a two-time Rajya Sabha MP, addressing a press conference at the party’s state headquarters, watered down the charge from “paid news” to “biased” reporting.

On 27 August, the same newspaper ran another story which claimed that the Congress High Command had succeeded in persuading a ‘reluctant’ Faleiro for the top job in Goa. Quoting sources, the report said: “Gandhi (Sonia) personally spoke to Faleiro who finally relented in the interest of the Congress."

Speaking to Firstpost on Friday, All India Congress Committee (AICC) secretary in-charge of Goa A Chellakumar has denied both developments, but also added that the “High Command is aware of what is going on in Goa." “Till now, John Fernandes is PCC president,” Chellakumar said.

Appointed as state president in December last year, Fernandes, a relative non-entity in contemporary Congress politics, inherited a party which had been reduced to an unprecedented single digit in the state legislative assembly. It’s tallest leaders, namely former home minister Ravi Naik and former chief minister Digambar Kamat, were linked to the drug mafia and the mining mafia respectively. Others like Churchill Alemao, Mauvin Godinho were battling charges or corruption or anti-party activity. To top it all, current leader of opposition 75-year-old Pratapsing Rane seemed more obsessed with issues like importing bull semen and the stray cattle menace instead of really taking the battle to the treasury benches.

Fernandes’ role at the helm can best be compared to that of a young Virendra Sehwag at the top of the Indian batting order. The maverick politician, claimed that he had been tasked by Congress vice president Rahul Gandhi to purge the party of corruption and blackmail by its senior leaders and usher in new, younger leadership. And Fernandes went on a rampage, like the former Team India opener. Only unlike Sehwag who hammered opposition bowlers into submission, Fernandes bludgeoned his own senior tainted leaders, who his supporters now claim, are ganging up against him trying to oust him.

Fernandes’ outspokenness against the senior Congressmen had even also forced AICC general secretary Digvijaya Singh to advise him to “speak less and work more."

While Fernandes’ purge with suspension of several senior party leaders and disciplinary action against several more tainted ones, John appears to have failed in rallying around younger Congress leaders, who can pull their weight around, barring a core team of young spokespersons. His war of words with the Congress legislative party members won him more detractors.

Against this backdrop, CWC member Luizinho Faleiro’s behind-the-scene efforts to re-enter state politics make sense. Especially, since Fernandes has already ‘tasered’ several senior leaders, who could have potentially competed with Faleiro for the top organisational slot.

“With the massive UPA-2 defeat, a position in the CWC no longer has that charm. One of the reasons why Faleiro could be keen on a comeback to state politics,” a state Congress official said. Faleiro, however, denies he has any plans to come back to Goa.

While speaking to this correspondent some time back Faleiro said that his current brief was overseeing the affairs of the north-eastern states and that kept him so busy, that he had no time for state politics. “I have no time to attend to my work in Delhi and I will not be in a position to spare time for Goa,” he insists now, when questioned by the media.

For a party already wallowing in a severe state of trauma, thanks to a chronic credibility crisis, infighting, tainted sulking heavyweights, a lackluster leader of opposition, the latest battle for top leadership may well send the Congress in Goa into a political coma.