Food security: Easy to feed poor, but not Gandhi family

The Union cabinet is said to have deferred consideration of the contentious Food Security Bill (FSB) because several senior ministers - Agriculture Minister Sharad Pawar, among them - have questioned its viability.

Just as well. The problem is not that the poor do not deserve food security, but a harebrained scheme is not going to deliver it. The FSB, as currently conceived, is a messy compromise between what Sonia Gandhi's NGO mob wants and what the government thinks its finances can afford.

Net result: the FSB captures the worst of both worlds. It will neither guarantee food security nor help the government keep its finances in some shape in a year in which the world is going downhill.

In fact, we shouldn't call it the Food Security Bill, but the Sonia and Rahul Political Insecurity Bill. FSB is meant to secure the political fortunes of Sonia and Rahul Gandhi, never mind the cost. Feeding the poor is only incidental to its aims. 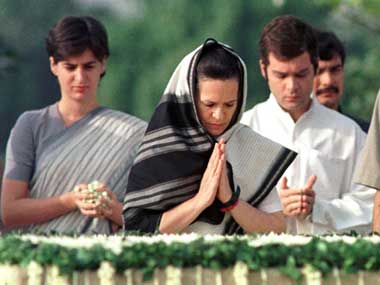 We shouldn't call it the Food Security Bill, but the Gandhi family's Political Insecurity Bill. Reuters

Priority households will get 35 kg of coarse grains, or wheat or rice at the 1-2-3 price: coarse grains at Re 1 a kg, wheat at Rs 2 and rice at Rs 3. The non-priority beneficiaries will get the same at half the minimum support price of these grains.

The problem with 1-2-3 is that it is not as simple as A-B-C. The scheme will fail not only because it is too expensive, but because it is simply unworkable due to its complexity.

As Pratap Bhanu Mehta argues in his Indian Express column, "the more a scheme relies on complex targeting, the more likely it is to fail."

Mehta says that the FSB "creates Orwellian categories like priority households and general category households. And it introduces new forms of differential pricing. In short, it willfully incorporates into its design three features that have made schemes in the past a failure: impractical targeting categories, administrative complexity, and incentives to game."

In Mehta's view, the scheme should be universalised to give it a chance of success, but his objections do not go far enough.

The more fundamental objection one should have to the FSB is to ask where it fits into the overall scheme of social safety nets for the poor. Currently, we have scores of them, all of them implemented poorly. The two most important ones are universal - the Mahatma Gandhi National Rural Employment Guarantee Scheme (NREGA, for short), and the mid-day meal scheme for school children. Then, of course, we have the current public distribution system (PDS).

Here are the questions to ask:

• Is food security about delivering subsidised grain to the poor or creating income opportunities for them and improving the public distribution system (PDS)? If we do the latter, we don't need FSB to ensure food security.

• Is the physical delivery of grain more important than putting cash and choice in the hands of beneficiaries? Isn't it simpler to focus on improving agricultural productivity, and let people buy what they want at reasonable prices?

• If one aim of the FSB is to deliver nutritious food to pregnant mothers and early-age children, should this not be integrated with the mid-day meal and anganwadi schemes - where cooked food is the goal? Should one create yet another system for pregnant mothers?

• Most important, why is it necessary to insure both income and food for the poor when one may do the job better? Should NREGA be streamlined and made more universal to generate year-round incomes, and perhaps include a dole, too, to become the prime safety net for the poor? There would be no need for FSB then.

• Is it sensible to proliferate schemes with similar objectives when we can improve existing ones to improve their efficiencies? If more than 40 percent of the PDS grain is pilfered or gets into the wrong hands, shouldn't we be fixing this instead of starting yet another PDS under the name of FSB?

Sharad Pawar's objections to FSB - that the scheme will drive up global food prices in case we need to import, that it will ultimately affect the interests of farmers, and that the subsidy scheme is fiscally unviable - are valid, but can be overcome with some planning.

But the ultimate truth is this: no government has the capability to manage so many complex schemes intelligently and efficiently.

It is a myth that organisations can target multiple objectives successfully. Just as most individuals can manage at best one or two tasks well at the same time, government can also manage only one or two things simultaneously.

The UPA government has thrown caution to the winds and is trying to do too many things without thinking about their implications and implementation. Just look at the initiative overload it has convinced itself about: after NREGA, it has legislated the Right to Education, and now is planning the Food Security Bill and universalising health care. It is also planning to legislate tougher land acquisition and mining bills - both of which will take a huge amount of executive time - not to speak of the National Manufacturing Policy.

Quite clearly, the driving force behind all these initiatives is the political interest of the First Family - not national interest or the interests of the poor.

Proof: you cannot have long-term food security without an agricultural revolution, but the food and agricultural ministries are on opposite sides of the FSB battle. Clearly, Sonia Gandhi's political needs are trumping good policies. Bad politics is leading to bad economics.

The bottomline: the country has enough resources to feed the poor, but not the voracious political ambitions of the First Family.