First Arunachal, now Uttarakhand: With rebellion rising in Congress, Sonia-Rahul should be worried

Ouster of Congress governments in Arunachal Pradesh and Uttrakhand in span of two months due to intra-party factionalism and open revolt by a section of its legislators should worry Sonia Gandhi and Rahul Gandhi.

In Arunachal Pradesh, leader of the breakaway faction of the Congress party Kalikho Pul now heads the government and is supported by the BJP. In Uttarakhand, imposition of President Rule on Sunday was welcomed by rebel Congress MLAs and of course by the BJP. Harish Rawat government technically fell on 18 March when the Congress rebels had voted against the Appropriation bill (passage of budget) with the BJP.

However, the then chief minister Harish Rawat and Speaker Govind Singh Kunjal claimed otherwise saying that the Appropriation bill was passed by the voice vote. But the fact remains the official proceedings suggest that 35 MLAs, out of 67 MLAs present in the House had sought division (voting) and were denied. The numbers clearly indicate that that the Appropriation Bill was not passed on the evening of 18 March. 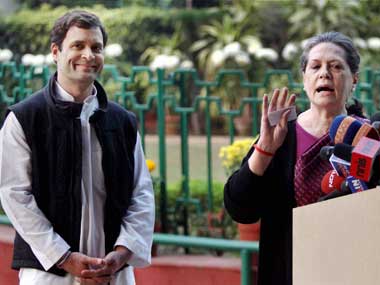 The Constitution states very clear that if the government of the day fails to pass the budget or any other money bill, the government falls. It would mean that the government has lost confidence of the House and was reduced to a minority and thus has to relinquish office. If Rawat didn't have majority of members in state assembly when Appropriation Bill was put to vote, then he lost the right to rule the state. Moralist arguments are for public debate but don't hold any ground in terms of technicality of the issue.

The BJP-Congress rebels tactic surprised all. It was for the first time that the Opposition and a faction of ruling party joined hands to make a common cause to bring down a state government.

If one takes the statements made by Rawat and Kunjal on face value then the question arises -- why send disqualified MLAs for defying the party whip and come under ambit of anti-defection law. If Rawat and the Speaker's claim on passage of budget is true then it means that these Congress MLAs voted for the government and didn't violate provisions of anti-defection law. More so, if at all the bill was passed why was it not sent to the Governor KK Paul for his sign and seal.

Non-passage and non-certification of Appropriation Bill means that the state government can't incur any expenditure of any kind from 1 April, 2016, something that would bring state machinery to a grinding halt. Now, that President Rule has been imposed in Uttrakhand under Article 356 of the Constitution, the Centre will have to make budgetary provisions under Article 357 for the state.

Rahul Gandhi, of course will have a chance to flex his muscles when the President Rule comes for ratification in Parliament. In Rajya Sabha, the BJP is in minority and the Congress and its supportive parties are in majority.

But then the Congress vice-president should ponder over what Congress rebels like Vijay Bahuguna, Harak Singh Rawat and Subodh Uniyal have been publicly saying for past few days — that for the past few months they made all possible attempts to meet him and seek his intervention for intra-party affairs in Uttrakhand but he didn't give them an appointment. The Congress rebels in Arunachal, which now leads the government with BJP' support, had made similar claims or accusations against him. Despite its Arunachal experience, the Congress leadership didn't take any corrective measures with regard to Uttrakhand.

A news report in The Hindustan Times says similar situation is brewing in another Congress ruled state, Okram Ibobi Singh government in Manipur.

In a news conference on Sunday, after his government was dismissed and President Rule was imposed in Uttrakhand, Harish Rawat said the BJP and Modi government at the Centre had become desperate to remove his government because he had presented an excellent annual budget which would have cured all the ills of the state. A tall claim, by any standards. The time frame for implementation of his own promises was only eight to nine months for the assembly elections in the state, as also for Uttar Pradesh, is set to be announced by early or mid December.

What Rawat didn't mention that it was his government's and his party's responsibility to have that budget passed by the state assembly. Rahul will have to see that he needs to do much more to keep morale of his party leaders and workers.