The rivalry between Ashok Gehlot and Sachin Pilot in Rajasthan has triggered new turmoil in Congress. ANI File Photo

The Congress’ troubles seem to be unending. Amid poll defeats, senior leaders’ exits and infighting in several state units, now revolt has hit the Rajasthan Congress.

On Sunday night, more than 80 MLAs, loyalists of Chief Minister Ashok Gehlot, submitted their resignation letters to the Assembly Speaker CP Joshi. The move came after reports of the possibility of Sachin Pilot succeeding Gehlot as chief minister cropped up if the latter was elected as the Congress president.

The Gehlot camp demanded that the chief minister should be chosen from the 102 MLAs who were loyal to the Congress party in 2020.

The rift between Gehlot and Pilot had erupted during the 2018 Assembly elections when both the leaders were in the race for the Rajasthan chief minister’s post. The Congress leadership had picked Gehlot while Pilot was made his deputy.

In July 2020, Pilot, along with 18 party MLAs, had rebelled against the Gehlot government, plunging the state unit into a crisis. It was only after Rahul Gandhi’s intervention that the tussle was resolved, however, the discontent between Gehlot and Pilot never vanished.

As Rahul Gandhi leads Bharat Jodo Yatra across the country, the Congress’ own flock is exposing fissures in the party.

Here are other leaders whose infighting has caused a headache for Congress:

The two leaders openly attacked each other much to the embarrassment of the top Congress brass. Sidhu hit out at Singh over various issues including the SIT appointed for the Bargari sacrilege case.

Sidhu also accused Singh of having a “secret arrangement” with the Shiromani Akali Dal (SAD). The captain called Sidhu an “opportunist” and also rebuked him publicly. A year before the Punjab Assembly polls, Sidhu took 62 of 77 Congress MLAs from Chandigarh to the Golden Temple in Amritsar in a show of strength. Singh’s camp had demanded a public apology, which was rejected by Sidhu’s side.

After little backing from the Gandhis, Amarinder Singh had to step down from the Punjab chief minister’s post. In a seven-page resignation letter to Sonia Gandhi, Singh also resigned from the Congress in November 2021.

He hit out at Sidhu and the Gandhi siblings in his letter.

“Sidhu’s only claim to fame was that he would abuse me and my government on a regular basis. I am old enough to be his father but that did not stop him from using the filthiest and most vile language against me both publicly and privately,” Amarinder Singh said in his letter.

He also said Sidhu was patronised by Rahul and Priyanka Gandhi, while Sonia turned a blind eye. “I told you that Sidhu is a person of unstable mind and you will one day regret this decision and it would be too late by then,” he was quoted as saying by Hindustan Times.

Currently, Amarinder Singh has joined BJP and merged his political outfit Punjab Lok Congress with the saffron party, while Sidhu is in jail in a 1988 road rage case.

Despite Congress’ efforts to tame the infighting in the Karnataka party unit ahead of the 2023 Assembly elections, the chasm between DK Shivakumar and Siddaramaiah often spills out in the open.

The leaders from Shivakumar and Siddaramaiah’s camps have often targeted each other failing to present a united front in the state.

In August this year, Rahul Gandhi flew to Karnataka to participate in Siddaramaiah’s 75th birthday celebrations. He praised the veteran leader’s leadership in his speech, saying Siddaramaiah showed “compassion for the poor and weak” during his tenure as the Karnataka chief minister. 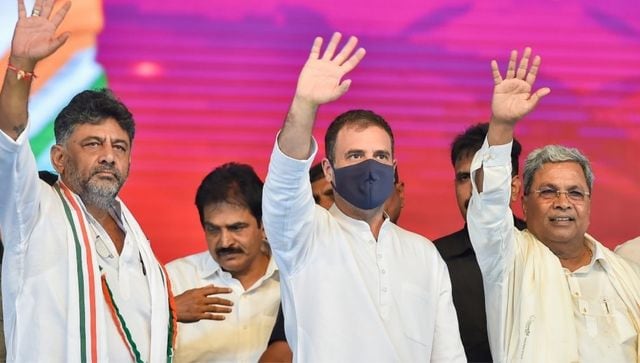 With Rahul Gandhi present, the bonhomie between DK Shivakumar and Siddaramaiah was visible during the latter’s 75th birthday celebrations. PTI File Photo

With Gandhi present, a bonhomie between Karnataka Congress chief Shivakumar and Leader of Opposition Siddaramaiah was also visible during the event.

While Shivakumar lauded Siddaramaiah as a ‘leader of all communities’, the latter dismissed reports of differences between the two.

As per The Wire, Rahul Gandhi has directed the rival camps to “keep their ambitions in check” and not to discuss leadership conflicts publicly.

The tussle between Chhattisgarh minister TS Singh Deo and Chief Minister Bhupesh Baghel reignited when the former resigned from the panchayat and rural development department in July this year.

Among the reasons cited for his resignation was the non-sanction of funds under the Pradhan Mantri Awas Yojana. “Despite my repeated request to you to sanction funds under Pradhan Mantri Awas Yojna, it was not allotted, as a result of which houses could not be constructed for eight lakh people. Under 36 targets set under our poll manifesto, house to poor was prominently mentioned. But in the incumbent government, not a single house was constructed for houseless and progress of the scheme was nil,” Hindustan Times cited Deo’s letter as saying.

Deo and Baghel have been embroiled in a contest since Congress defeated the BJP in 2018 to form the government in Chhattisgarh.

As per some leaders, Rahul Gandhi had told Deo and Baghel that the chief minister post would be shared with each ruling for two-and-a-half years, Indian Express reported.

However, Baghel has denied the claim.

The rivalry between then Madhya Pradesh chief minister Kamal Nath and Jyotiraditya Scindia had resulted in a major loss for the Congress.

Scindia started displaying his dissatisfaction after Kamal Nath was chosen over him to take over as the MP chief minister in December 2018. 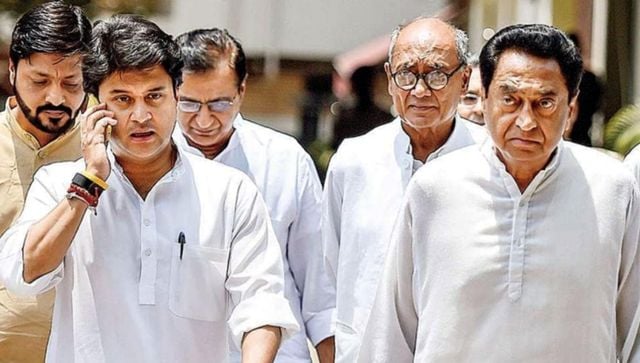 Jyotiraditya Scindia led to the collapse of the Kamal Nath government in Madhya Pradesh in 2020. PTI File Photo

The turmoil escalated when Scindia warned of “hitting the streets” against Nath’s government if poll promises were not fulfilled. Nath responded by saying that he was free to launch an agitation, PTI reported.

After giving an ultimatum to the Congress leadership to appoint him as the MP Pradesh Congress Committee chief, Scindia, along with 22 party MLAs, quit the grand old party and joined BJP, leading to the collapse of the 15-month-old Kamal Nath government in 2020.

Scindia was rewarded by the BJP with a berth in the Union Cabinet.

In August, the split was out in the open when several leaders demanded the removal of the current Pradesh Congress Committee president AV Subramanian, who is considered close to Narayanasamy.

The Puducherry Congress is already weak after defections to the BJP.

“The party is already decimated and there are no senior leaders who command respect other than Narayanasamy… there is a tendency in the party to try and marginalise him. The Congress of Puducherry is a minor force now with a majority of leaders having crossed over to the BJP before the last assembly polls leading to the saffron party gaining power in association with former Congress leader, N Rangasamy,” a senior Congress leader told IANS.

Besides rivalry among its big leaders in several states, the Congress also saw a major setback in Goa when eight of its 11 MLAs left the party and joined the BJP in early September.

Micheal Lobo and Sankalp Amonkar, who defected to the BJP, claimed there was infighting in the Goa Congress, a charge which the grand old party has denied.