India Today-MyAxis exit poll predicts a tough contest with a slight edge for the BJP in West Bengal. According to the pollster, BJP is likely to win 136-160 seats while the TMC is predicted to register victory in 130-156 seats. The left is projected to win 0-2 seats. The majority mark in the 294 seat Assembly is 148. 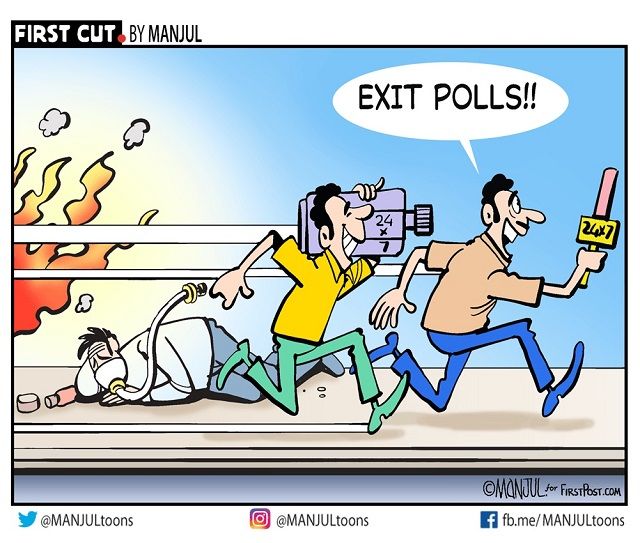 During a debate on a news channel, Congress's Pawan Khera said, " None of us can afford to smile given today's situation. Given the situation in the country, I dont feel like giving comments on this subject. Today the country is losing against COVID but we are debating who won and lost on exit polls, the country won't forgive us. Atleast I wont commit this sin."

Pawan Khera ji gets emotional on ABP News and requested the anchor in the situation the nation is going thru, he isn't willing to debate Exit polls. But his willing to sit if he is given space to speak on Covid @Pawankhera @rssurjewala pic.twitter.com/y8JVhHaCSi

India Today-Axis My India has projected 175-195 seats for DMK out of 234 assembly seats. It has predicted that AIADMK will manage only 38-54 seats in the 243 member Tamil Nadu Assembly. The pollster predicts 1-2 for TTV Dhinakaran's AMMK, 0-2 for Kamal Haasan's MNM and 0-3 seats for others,

Following are the predictions by pollsters for the Assam Assembly elections. The majority mark in the 126-member Assembly is 64.

Republic CNX predicts victory for DMK with 160-170 seats. The MK Stalin-led party has been in the Opposition since 2011.
These are the predictions of the Republic CNX exit poll for Tamil Nadu. The state has a total of 243 Assembly seats.

Exit poll results 2021 latest updates: IndiaToday- MyAxis predicted 136-160 seats for the saffron party in the 294 member Assembly while the TMC is predicted to register victory in 130-156 seats

Pollsters have predicted a close contest between TMC and BJP in Bengal with an edge to Mamata Banerjee.

In the southern states, the CPM-led LDF is projected to retain the power in Kerala. In Tamil Nadu, the DMK-Congress alliance is predicted to dislodge the ruling AIADMK-BJP alliance in the state.

Republic TV CNX predicts a victory for DMK with 160-170 seats. The MK Stalin-led party has been in the Opposition since 2011

Axis My India has predicted the incumbent LDF will sweep the Assembly elections in Kerala, bagging around 104-120 seats.

Axis My India poll predicts that BJP is set to retain power in Assam. The pollster predicts 75-85 seats for the BJP, with the Congress alliance following with 40-50, seats and 1-2 seats for others.

The results of the exit polls for four states and one Union Territory will be released at 7 pm today, said reports, after polling for the last phase of the West Bengal Assembly election ends. However, the Election Commission had banned the publishing  of exit poll results between till  7.30 pm on 29 April.

The counting of votes is scheduled for 2 May.

The state saw a three-cornered fight between the Trinamool Congress, Bharatiya Janata Party and the Left alliance. While the BJP was considered a marginal player in West Bengal at the time of the previous Assembly election 2016, it has emerged as a strong contender following its performance in the 2019 Lok Sabha election. The TMC is seeking to win its third straight term in the state.

The West Bengal Assembly has a total of 294 seats. Elections were held in eight phases in the state from 27 March to 29 April.

The BJP is hoping to retain power in the northeastern state. the saffron party is up against the combined challenge of eight parties including the Congress and the AIUDF of perfume baron turned politician Badruddin Ajmal, who might prove to be kingmaker.

The BJP and its allies AGP and UPPL contested 92 seats, 26 seats, and 8 seats respectively while the Congress claimed 94 seats for itself, AIUDF was allotted 14, Bodoland People’s Front got 12, and Communist Party of India (Marxist) just two.

Single phase election to the 243 seats in Tamil Nadu was held on  April. The main contest is between the DMK-Congress alliance and the AIADMK-BJP alliance.

The DMK is aiming to unseat the ruling party while the AIADMK is keen to ensure the continuation of "Amma aatchi" (Amma's rule) for an unprecedented third time. when the AIADMK, under Jayalalithaa, stormed to the ruling saddle and also retained power in the subsequent elections in 2016.

The AIADMK however faces an uphill task, especially after the rout in the 2019 Lok Sabha election when the DMK-led alliance won 38 out of 39 seats.

Kerala's 140 seats went to the polls in a single phase on 6 April with 73.58 percent of the total 2.74 crore voters exercising their franchise.

The state is keenly watching a three-way battle between the incumbent Left-led LDF, the Congress-led UDF, and the BJP.

Puducherry, currently under President’s Rule after the V Narayanasamy-led Congress government collapsed in February, voted in the Assembly polls on 6 April.

The seats spread across four districts voted in single-phase polls in the Union Territory where the UT recorded a voter turnout of 81.64 percent. Yanam, the seat from where AINRC chief N Rangasamy was contesting, registered a higher percentage of polling than other regions.

While the BJP has contested the polls in alliance with the AIADMK and AINRC, the Congress has allied with the DMK. While AINRC fielded candidates in 16 of the total 30 constituencies the BJP contested in nine seats, while the AIADMK was given five seats.