Bhopal: The Congress alleged Monday the "weak" Narendra Modi government "compromised on" the national security by allowing a "third party mediation" in Jammu and Kashmir, days after an ex-Norwegian prime minister's visit to the state.

Congress chief spokesperson Randeep Surjewala said the policy underlines that only India and Pakistan can hold a mutual discussion on the boundary dispute and accused the central government of violating the country's 71-year-old policy to deal with the issue.

"You must have read in newspapers... I don't want to take his name, I don't disrespect him. But for the first time, Modiji has sent a former prime minister of a third country to J&K to talk with separatists...Why? This question should be asked to him," Surjewala told reporters.

He was apparently referring to the recent visit of former Norwegian prime minister Kjell Magne Bondevik to Jammu and Kashmir where he met top separatist leaders. 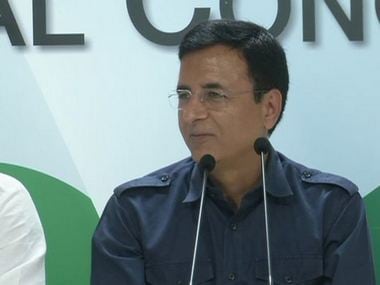 Surjewala was replying to a query on Congress minister Navjot Singh Sidhu's comments on India-Pakistan relations in the context of Pakistan's announcement to develop a corridor to Kartarpur Sahib, the final resting place of Sikhism founder Guru Nanak Dev, in that country. Sidhu had said that "Pakistan would take two steps towards harmony, if India takes one".

"It has been India's policy that any mediation by a third country is not allowed and that India and Pakistan can talk mutually about their boundary dispute," Surjewala said.

He said the Modi government "cannot be expected" to take a firm step on the national security.

"Unfortunately, for the first time a weak Modi government is in power, which has knelt down before terrorists, extremism and Naxalism. We cannot expect it to take a solid step on the issue of the national security," the Congress spokesperson said.

He said the prime minister has "blurred" the traditional policy of India on Jammu and Kashmir by allowing a former PM of a third country to talk with separatists.

"Today, it's one country's prime minister, tomorrow the US would ask to mediate in Kashmir dispute, then China and Russia would also come. What are you doing? This is a compromise on the national security," he said.

Asked if Sidhu's comments amounted to his love for Pakistan, Surjewala said, "Sidhu is the minister of a state and you (media) took up his comment which is not relevant.... not under his jurisdiction".

He said the media should ask the Modi government why a former prime minister of a foreign country was invited for a joint dialogue.

India and Pakistan had last week announced that they would develop Kartarpur corridor in their respective areas, linking Dera Baba Nanak in Punjab's Gurdaspur district with the Gurdwara Darbar Sahib in Pakistan.

Gurdwara Darbar Sahib, the final resting place of Sikhism founder Guru Nanak Dev, is located across the Ravi river in Pakistan and is about four kilometres from the Dera Baba Nanak shrine in Gurdaspur district of Punjab in India.
Surjewala said the prime minister has not kept his promise of bringing culprits of the 26/11 Mumbai terror attack to book.

"Modi had said that he would bring the culprits of the 26/11 terror attack within 24 hours. What happened? Four-and-a half years have been passed (since the BJP came to power). Why this promise was not kept?" he asked.

On 26 November, 2008, 10 terrorists of Pakistan-based Lashkar-e-Taiba attacked Mumbai. In the mayhem that followed for the next three days, 166 people including 18 police officers and two NSG commandos were killed while 308 people were injured.