Disappointed with the way foreign envoys brought to Jammu and Kashmir to endorse Centre's claims of normalcy, says National Conference

Srinagar: The National Conference (NC) on Thursday said it was "disappointed" with the way the government brought envoys from various countries to Jammu and Kashmir to "endorse" its "claims of normalcy" in the union territory. 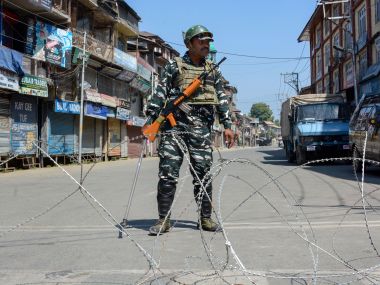 Envoys from 15 countries, including US Ambassador to India Kenneth I Juster, arrived on Thursday on a two-day visit to Jammu and Kashmir, the first visit by diplomats since August last year when the state's special status was revoked and it was downsized to a union territory.

"The NC wishes to ask these envoys that if the situation in Jammu and Kashmir is "normal", then why are scores of people, including three former chief ministers, under detention for almost 160 days and why have the people been denied access to the internet for over five months?" a statement issued by the party said.

The party described the visit of enjoys from 15 countries to Jammu and Kashmir on Thursday as a "repeat visit" of the European Members of Parliament to the erstwhile state earlier. The NC said while these visits may provide "short-lived propaganda victories", true normalcy will only be achieved when all detainees are released, communications and internet restored and "genuine" political activity resumed.

Officials said envoys of several countries had requested the government for a visit to Kashmir to get a first-hand account of the situation in the Valley following the 5 August decision to abrogate provisions of Article 370 and bifurcate it into union territories, Jammu and Kashmir, and Ladakh.

This is the second visit of a foreign delegation to Jammu and Kashmir since 5 August. Earlier, Delhi-based think tank International Institute for Non-Aligned Studies took 23 EU MPs on a two-day visit to assess the situation in the union territory. The government had distanced itself from the visit with Minister of State for Home G Kishan Reddy informing Parliament that the European parliamentarians were on a "private visit".