Did Ashok Gehlot’s revolt pave the way for Digvijaya Singh in the Congress president race?

With each passing day, there’s a new twist in the Congress presidential race. Senior leader Digvijaya Singh is the latest entrant while the jury is still out on Rajasthan chief minister Ashok Gehlot’s nomination

Senior Congress leader Digvijaya Singh will file his nomination for the post of the Congress president. The election is scheduled of 17 October and the results will be out on 19 October. File photo/PTI

The deadline for filing a nomination for the Congress presidential polls is a day away but it’s unclear who is in the race. Rajasthan chief minister Ashok Gehlot was the party high command’s favourite until his MLAs staged a rebellion against the possible elevation of Sachin Pilot to the top job in the state.

Now it remains unclear if Gehlot, considered Sonia Gandhi’s go-to man until the crisis in Rajasthan, is still in the race. With each day comes a new name, only adding to the speculation. The latest entrant is senior party leader Digvijaya Singh.

The developments have been quick. Singh left Kerala, where he was participating in the Bharat Jodo yatra, last night and headed to New Delhi.

Is Digvijaya Singh finally in the race?

Singh will submit his nomination papers on Sept 30 as the CEA chairman is currently out of Delhi.

The former CM is expected to meet senior Congress leadership and reports in the media said that one of his first meetings was with P Chidambaram.

Until last night Singh said that he had yet to take a final call. “I am seriously considering filing a nomination, but haven’t taken a final decision,” he told India Today on Wednesday.

Singh’s name first came up last week, when he was asked if he would file his nomination for the post of Congress chief. “People should wait till September 30,” he had said then. Around the same time while talking to NDTV he said, “Let’s see. I am not ruling myself out also, why do you want to keep me out?”

Then last Friday at a press conference in Jabalpur, Singh said that he would not contest the Congress presidential election, but would follow instructions from the higher authorities in the party.

But why Digvijaya Singh?

In the wake of the brouhaha in Rajasthan, the party high command reportedly has a “two-pronged approach”, according to a report by The Indian Express. While some senior leaders have been trying to smoothen things out with Gehlot, Congress was also looking for an alternative candidate.

Now it appears like the Madhya Pradesh leader could be that option.

According to party insiders, Singh’s possible candidature is part of Congress’ “Plan B” to pressure Gehlot to accept the leadership’s decision to contest the upcoming election, the newspaper reports.

While Gehlot was keen to take on the big party post he was reluctant to let go of the CM’s chair in Rajasthan. However, Congress has a “one person one post” policy which it wants to abide by. The veteran leader’s other concern is that the CM’s job will go to his rival Sachin Pilot.

However, it has been made clear to him that the decision on his successor would be taken by the Gandhis. 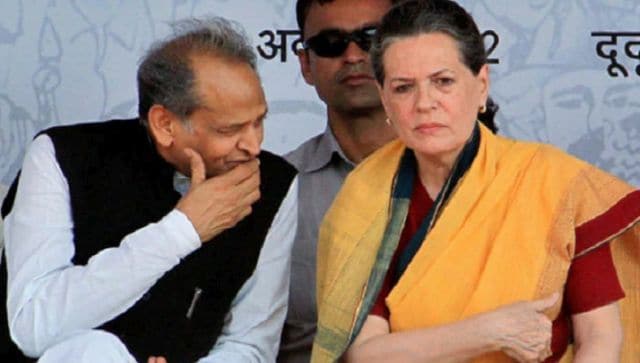 Gehlot, meanwhile, has been camping in New Delhi since Wednesday and is expected to meet Sonia Gandhi, who is reportedly miffed with him. He arrived in the Capital around 10.30 pm Wednesday on a special aircraft.

Talking to reporters on Wednesday, the Rajasthan CM said internal issues that have cropped up within the party ahead of the Congress president’s election will be resolved soon. The party has internal discipline, which helped it “survive the decline in Lok Sabha numbers” and it continues to be a national party, asserted.

“There is discipline in the party under Soniaji,” he said. “The events being reported by the media are small issues which keep happening. The media may have its own perspective on these events,” he added.

Gehlot said fighting issues the country is facing is more important for them. “Matters of a family are part and parcel of internal politics. We will solve everything,” he told reporters in Delhi. He said for them the Congress president is foremost and they all work under her discipline.

Who else is in the race?

Over the days, several new names have come up; some of them include senior leaders Mallikaarjun Kharge, AK Antony, Kamal Nath, Ambika Soni and Pawan Kumar Bansal. Most of them have ruled themselves out.

KC Venugopal, whose name came up earlier, met Sonia Gandhi at 10 Janpath today. He travelled with Digvijaya Singh on the same flight from Kerala to Delhi.

Madhya Pradesh Congress chief Kamal Nath said that he is not keen on becoming the party president and does not want to contest the election for that post as he wishes to focus on his home state, where Assembly elections are scheduled next year, reports News18.

He also said that the elections for the Congress president’s post are being held as Rahul Gandhi refused to take up the party’s reins.”I talked to Rahul Gandhi and urged him to contest so that all this (ongoing uproar) could be ended. I told him things are getting complicated. But he said he does not want to become (the party president),” Nath told reporters.

Meanwhile, Congress MP Abdul Khaleque on Wednesday batted for Priyanka Gandhi to take on the mantle, saying that being the daughter-in-law of the Vadra family, she is no more a Gandhi family member as per Indian tradition.

Shashi Tharoor was among the first leaders to throw his hat in the ring. But it remains to be seen who will he be up against.