Dial M for Moderate: How Modi gets a makeover by doing nothing

Narendra Modi is an astute politician. Of that there is no doubt. By substituting speeches for interviews, Modi is not just building up the persona he wants to project. He is also forcing pundits and analysts to write entire op-eds based on what he does not say.

Thus we now have Modi the Moderate constructed more out of The Silences of Modi than his actual utterances.

Modi, writes Ashutosh Varshney in The Indian Express, does NOT talk about Hindus as the “primary, or exclusive owners of the Indian nation.” 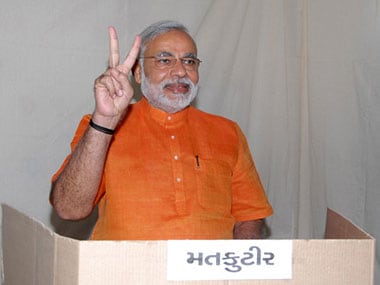 Modi has the luxury of having other people making a case for him: AFP

Of course, he does not NOT talk about it either. His rallies might come laden with conch-blowing Hindu ceremony but he sidesteps the “Hindu rashtra” question entirely by talking piously about the Indian Constitution being his only religion and development for all being his only agenda.

Now if Modi subjected himself to an interview, he could be asked directly “Do you believe India is a Hindu rashtra?” He will probably give the same answer about the Constitution. But an interview permits a follow-up question. In its absence, analyzing Modi’s campaign speeches to get a handle on the evolution of his thinking is a bit like a Rorschach inkblot test. Is that a butterfly? Sure. Is that a couple having sex? Why not? It’s all in the eye of the beholder.

One could read Modi’s silence on Hindu rashtra as evidence of a new pragmatic Moderate-va Modi. One could also read his candidature from Varanasi as an indicator of the older Hindutva Modi. You can interpret his tweet asking followers to desist from Har Har Modi chants as a sign of a Modi who is trying to not appear aggressively saffron. You can also interpret his not nipping those chants in the bud as a man trying to have it both ways. He let the chants go on long enough to be implanted in people’s brains before issuing the gentle reproof.

MJ Akbar at least has to go on television shows and pen op-eds to justify his Modi volte face. Even that does not convince his critics. Salil Tripathi writes in Mint:

Here is the kind of question Akbar, the journalist of the 1970s and 1980s, would have asked Modi: "What sort of a leader are you that you appointed, tolerated, and persisted with such individuals in your government and in the party for nearly a decade? Who was in charge?"

But at least Akbar is trying to answer those questions to make a case for himself.

Modi has the luxury of other people, like an Akbar, making that case FOR him. And he himself does not have to say anything to indicate he has changed in any way. So Varshney is left clutching at straws.

For example, Modi might steadfastly oppose being photographed in a skullcap though he is happy to don a hornbill hat in Arunachal Pradesh. But, Varshney notes, he is talking about Haj subsidies and how Gujarat’s quota is oversubscribed while the quota of the state where he is making the speech (fill in Bihar, UP or West Bengal here) is not.

First, Hindu nationalists have always opposed the Indian government’s Haj subsidy, in operation since 1973. According to them, it signifies Muslim appeasement. Second, it is a subsidy to visit the “holyland”, which is in Mecca. According to Savarkar, the emotional chords such pilgrimages incubate undermine patriotic feelings towards India. In contrast, no Hindu visiting Varanasi can feel the tension between Hinduism and India.

But the Haj story works perfectly for Modi because it fits in completely with his narrative of how Gujarat’s Muslims are economically better off even while his critics harp on him being communal. Again, nobody is getting to ask him “Do you support Haj subsidies?” And he is saying nothing about his feelings about Haj subsidies and whether they should have a place in his India. He is merely mocking the opposition-ruled state in question by saying even by your indicators of religious pluralism and minority perks, Gujarat is ahead.

When Modi came to address a rally in Kolkata, the speakers before him hoped he would talk about infiltrators from Bangladesh and the plight of Hindus there. Modi chose to talk about Haj subsidies instead. But weeks later in Assam where these tensions flared into riots in 2012 he said, “We have a responsibility toward Hindus who are harassed and suffer in other countries. Where will they go? India is the only place for them.”

It’s no surprise that the L K Advani battle cry of “Garv se kaho hum Hindu hain” has disappeared from the BJP campaign trail. The BJP itself discarded it as Varshney points out when Atal Behari Vajpayee came to power. There’s no reason for Modi to pick it up now. His credentials for his more Hindutva-minded followers are rock solid. He can afford to concentrate on the development mantra to woo over the others. And that’s what he is doing as any smart politician would.

Whether it’s in India or the US, even a hardliner who has real ambition for top political office starts running to the centre once the main campaign gets under way. There is no reason for Modi to be any exception. The liberals’ problem in fact is they have overblown Modi into the fire-breathing Hitler bogeyman who is ready to throw Muslims out of India and rip its secularism to shreds. To be "moderate" Modi just has to say nothing to live up to that image.

To be fair Modi the Moderate is probably a clever headline writer’s pick, not Varshney’s choice. Varshney, in fact, qualifies his assessment by admitting “Has Modi undergone an ideological transformation from his 2002 days? We don’t have enough evidence to make that claim yet.”

Varshney is entitled to his read of Modi and to even change his mind on Modi but tying ourselves into knots as we read volumes into what Modi does not say is as illogical as saying Pramod Muthalik could be dubbed a women’s rights activist if he just says nothing about beating up women in pubs anymore.

Instead of focusing so much on what Modi did not say, perhaps his critics would be more well-served training their firepower on what he does actually say. For example, this rich nugget from a speech yesterday.

"A government that cannot protect its own people should not stay in power even for a minute.” How many minutes has it been from February 2002?

Somewhere in a corner of India, irony is rusting into oblivion.