New Delhi: Union Home Minister Amit Shah on Wednesday termed the 8 February assembly elections in Delhi a contest between two "ideologies" and said the poll results will be a shocker to everyone.

In an election meeting in east Delhi's Kondli, he continued his attack on the ruling AAP in Delhi and the Congress, saying they opposed the BJP on issues like Citizenship Amendment Act (CAA), Ram temple in Ayodhya, abrogation of provisions of Article 370 due to fear of their "vote bank". 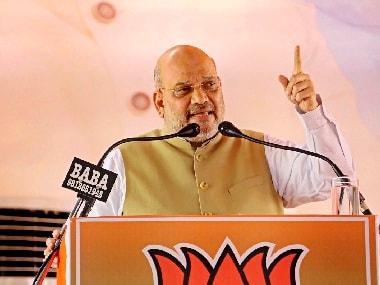 The former BJP chief, who has been spearheading party's Delhi election campaign in a whirlwind series of meetings and roadshows, said that the polls were not a contest between two parties.

"Delhi elections are not a contest between two parties. You have to choose between two ideologies, Rahul Baba, Kejriwal and the company which supports Shaheen Bagh or Modi who is safeguarding the country," he said.

A protest against CAA, in which a large number of women are participating, is underway at southeast Delhi's Shaheen Bagh area since mid-December. Shah also attacked the AAP national convenor and chief minister Arvind Kejriwal accusing him of being "number one liar".

Shah promised to grant sanction to prosecute JNU case accused Kanhaiya Kumar and Umar Khalid, and Sharzeel Imam, who was booked under sedition charges, within one hour of the BJP forming government in Delhi. He also assured that the Modi government's health scheme Ayushman Bharat will be implemented soon after his party formed government.

Shah said that the Modi government has formed a trust for Ekadashi and added a grand temple will be soon constructed in Ayodhya. The Union Home minister ended his speech in his trademark appeal, "press the EVM button on 8 February in Kondli with such anger that its current (poll result) shocks Shaheen Bagh".

The BJP is working towards upstaging the ruling AAP and forming its government in Delhi after a gap of over two decades. A whole lot of BJP top brass, including Shah, party chief JP Nadda, Union ministers, chief ministers of NJP ruled states, senior party functionaries and parliamentarians are involved in hectic campaigning for the assembly elections.

Campaigning for the polls to 70 membered Delhi Assembly will end at 5 pm on Thursday. The results of the elections will be declared on 11 February.