For some, the Delhi Education Revolution is too good to believe. Therefore, doubts are raised time and again on how Delhi government schools achieved remarkable results in the Class 12 board examinations. An article published in Firstpost on 31 January, 2020, with a title that read, "Delhi election: Despite AAP's lofty claims to lifting quality of education, over a lakh students 'misled', left behind".

I have two serious reservations with his story. First, the reporter has selectively picked up data of one year to cast aspersions on the incumbent government without looking at the trend of previous years. Second, projecting the angst of the likes of Nishu and Sheetal as though Delhi government deliberately pushed them out of their schools is an unfair allegation.

Let us look at the issue of selective use of data first.

Now, let us look at the figures for the cohort of 2014-16. In 2014-15, which is the year before the Aam Aadmi Party (AAP) government came to power the actual number of students who failed in these four classes were 1,91,450. This constituted about 27 percent of the total number of students who appeared in the exam from these classes. Of those who failed, only 50 percent took readmission. Two conclusive points can be drawn from this data. First, with the pass percentage having improved by 5 percentage points in these classes, the argument that children were made to fail to get better results in Class 12 does not hold ground. Second, in comparison to the situation until 2016, remarkably AAP government retained 10 percentage points more children in the school system and that too within the first three years of its governance. 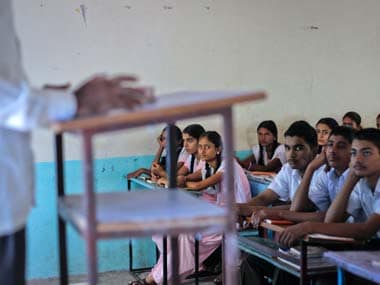 Every Nishu and every Sheetal is important for us. The investment in education by the AAP government is not done to keep any child out but on the contrary, to ensure that many more children get an opportunity to receive good quality education.

Unfortunately, Nishu and Sheetal and nearly 50 percent children of Class 9 have been victims of the well-intentioned but poorly implemented provision of "No Detention" under the Right to Education Act 2009.

Thus, from 2010 onwards, students were promoted automatically every year till they reached Class 9. The adverse impact of such a provision was first noticed in 2012-13 when 31.3 percent students of Class 9 in Delhi government schools failed. The slide accelerated over time and in 2014-15, it was 48.3 percent.

The story of Nishu and Sheetal is truly heart breaking. Until they reached Class 9, nobody told them how they were doing and nobody took the effort to find out whether they could even read a paragraph of their textbook or do basic math operations and if not, to support them in learning that.

In fact, by receiving report cards with pass written on it year after year, they innocently believed that they deserved to keep moving to the next grade and when the no detention policy ceased to operate in Class 9, these children were in for a rude shock. After failing consequently in Class 9 most students like Nishu and Sheetal would drop out as noted in 2014-15, where the number of students who failed more than twice in Class 9 and stayed back was just 128 and in 2015-16, it was just 321 which was less than 0.5 percent of the total students in this class.

To address this situation, the AAP government introduced a two-pronged strategy in 2016. The first, immediate step was to provide a pathway to those having failed twice or more in Class 9 to take the modified Patrachar exam of CBSE's Class 10 and second, strengthen the foundational learning skills of students from Class 6 onwards so that they do not fail in Class 9. That the modified Patrachar option did not work out in the case of Nishu and Sheetal is regrettable but it at least provided them with one more chance to clear their Class 10 exams instead of being stuck in Class 9 or drop out.

In 2017, to make the process even simpler for students like Nishu and Sheetal, the Delhi government partnered with the National Institute of Open Schooling (NIOS) to provide one more option to those who failed twice or more times in Class 9. The option was to appear for the Class 10 examinations.

NIOS offers a wider choice of subjects, flexible credit transfer scheme and an on demand examination system. Delhi government conducts regular classes for appearing for the NIOS exam and covers the entire cost of it including exam fees. School teachers were asked to share this option with students to prevent them from dropping out. Thus, 18,345 children took the exam through NIOS in 2018-19 and 64 percent of them passed, thus enabling them to join Class 11 in their own schools.

Let me also share that in Class 12 this year, the result was 94.2 percent originally and that of Class 10 it was 71.6 percent. The number of students appearing in the board exams of these two classes was 15 percent and 22 percent respectively more than the previous year.

Additionally, by organising special classes for students who were placed for compartment exams, the final result of these classes rose to 96.5 percent and 81.4 percent respectively. It was the commitment of Delhi government towards every child that 19,376 children who might have been left behind were enabled to pass the exam and move to the next grade. Thus, to say that any child was failed deliberately to show better result is unfair.

Over and above this discussion on numbers is a larger issue at hand that needs to be recognised. It is the limitation of the CBSE board examination system that still operates on a pass-fail binary. Thus, if a child fails in say Math and/or science in Class 10, s/he cannot move to the next grade even if s/he has no interest in those subjects or does not wish to study them in senior secondary grades. This is not how the 21st century evaluation system should be conceptualised.

While NIOS was an attempt of the Delhi government to create one more chance for children from the existing and available options, a more permanent solution is required. That is why AAP government has proposed the setting up of a Delhi State Education Board that would engage with a contemporary and relevant system of learning assessment that would measure the understanding and ability of the child to apply her/his knowledge and guide them to pursue excellence as per their aptitude and interest.

To conclude, I would like to say that it seems some eternal skeptics have given up on government school systems to deliver good quality education and produce good results. Hence, at times the success of Delhi government schools and its children is seen by some with suspicion. The question we have to ask ourselves is, why does a pass percentage of more than 96 percent in Class 12 and more than 1000 students securing more than 90 percent marks look unbelievable or unrealistic? The quality of teachers has always been good in Delhi government schools, the missing link was motivation, training and support. With this government providing all the three, these results were to be expected. This is no rocket science. It just proves that where there is a will there is a way.