Mayawati is worried about the UP elections.

Mamata Banerjee is busy clipping the Congress’ wings in Bengal.

Jayalalithaa is promising glory days when her party will reach “the top spot in Indian politics.”

None of them seem to be particularly bothered about their gender. They haven’t gone out of their way to empower women in their states or even in their own parties. Neither have they formed any Ya Ya Sisterhood of Single Girls in Power. No one in West Bengal feels any great kinship with anyone in Tamil Nadu or Uttar Pradesh because they all happen to now be living in “the spring of the matriarchs.”

But we in the media cannot get over our astonishment. The sub-head of the current cover story in Open magazine – Didi, Amma and Behenji -  betrays our bafflement: Making sense of how three women control one-third of India. In short, we are saying, whoa, how weird is THAT?

Madhu Kishwar puts it more elegantly in the magazine:

While Indian men have made it fairly difficult for ordinary women to feel comfortable as equal participants in the political domain, they tend to succumb easily to the demands of women who have the shrewdness and determination to grasp some dynastic or other leverage that provides them with the crucial opportunity to demonstrate that they are stronger and more resilient than the entire range of men in our politics.

Forget the fact that once one iron-fisted woman controlled all of India. Now the troika of Didi, Amma, Behenji, all conveniently in power at the same time, has given us endless scope for XX-chromosome rumination. 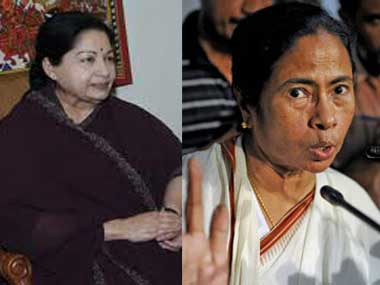 N discussion about the rise of women politicians is complete without a roll call of their alleged paramours. With the Tamil Nadu chief minister its MGR. But, the West Bengal CM is the exception to the rule.

Media has always struggled to cover women in politics. When Hillary Clinton ran for the US presidency in 2008, the New York Times wrote about the Clinton Cackle (as if  she was a hen or a witch); MSNBC devoted 23 minutes and 42 seconds in one day to segments on her cleavage; Politico ran a column about how “The (rhymes with rich) is back”.

In India, we don’t get into cleavage jokes. Nor is there much discussion about whether women bring out the women vote. We just cannot get over the fact that “they happen to be women in power in a country where this is uncommon.” And every story about what India Today dubs “the powerpuff girls,” even the most well-meaning one, falls into the same old gender traps and then some.

Sex and the Single Girl

If it’s about women it has to be about sex. Mayawati and Kanshi Ram, Jayalalithaa and MGR. Mamata is the exception that somehow proves the rule. Historian Bharati Ray observed that all of these women really came into their own when they were past child bearing age – “her reproductive power is gone so she does not have to be kept under surveillance. The control of sexuality is not that important.”

But no discussion about the rise of women politicians is complete without a roll call of their alleged paramours. Male politicians from Yeddyurappa to Jagjivan Ram also have had to deal with rumours about their affairs. But that’s always about their manhood, their personal lives, never about their politics. Open’s Hartosh Singh Bal should actually get credit here because he points out that any discussion of a “physical” relationship conveniently overlooks the fact that a Kanshi Ram or an MGR also saw real “potential” in these women. When Mayawati told Kanshi Ram she wanted to be a collector, he  retorted “I can make you such a big leader one day that not one,  but a whole row of collectors will line up in front of you, waiting for your orders.”

I Dress, Therefore I Am

Clothes, apparently, always make the woman. What does it symbolise that Mamata Banerjee dresses like a widow in plain white cotton saris? Shobhaa De spent an entire day with Mamata to come up with this earth shattering revelation – Didi has an expert dye job. How often do male politician’s hair come under such scrutiny? Jayalalithaa was fond of her silks and jewels. But now, says sociologist MSS Pandian in Openm, “her cape, the term Amma, all this seeks to de-sexualise her.”

Mayawati’s handbags and pink salwar kameezes routinely make it into any copy about her. The Hindustan Times did an entire story  on the mystery of the missing handbags. What does it mean that Mayawati has her statues remade to add handbags while the other two shun handbags totally? Do they see a handbag “as an emblem of frivolity which would work against their being taken seriously in the public sphere?” Perhaps all it means is we  might be spending a lot more time on their wardrobe than they do.

Cult of the Goddess

The cult of the Goddess is unique to India. We routinely position our leading ladies in the Hindu pantheon, an honour we rarely reserve for even the most Hindutva-spouting male politician. LK Advani might get on a rath and Narendra Modi might be the great defender of the faith and MGR and NTR might have liked to play god in movies but it is Mamata who inevitably gets to be a “Kali of the footpath.” Jayalalithaa gets to ride a lion and also show up in a cutout as Mother Mary.

Mayawati’s building spree is effectively about building temples for herself. These ladies quickly turn into “avenging deities,” Jayalalithaa  apparently still  avenging the insult of being hauled away as the “other woman” from MGR’s funeral cortege in 1987. Mamata is avenging the CPM’s attacks on her. Mayawati is avenging “the collective, historic insults heaped upon the Dalit community.” Revenge is nothing new for politicians of all kinds but vengeful women undergo a particular political metamorphosis. They turn into Kalis running amuck with garlands of the bloody heads of political foes and impudent bureaucrats who dared to cross them.

The Goddess of Small Whims

Men change their minds, do about-turns, and defect to opposing parties. Women get to be whimsical. “The Poes Garden diva is known for her whimsical decisions,” pronounces India Today. Mayawati, it goes on to say, is “whimsical, volatile and opportunistic.” Then, for good measure, it calls Mamata “consistently inconsistent”, known for her “mood swings.” The triumvirate sounds more like women on the verge of a nervous breakdown than savvy politicians. In her blog Bloody Mary, CNN-IBN’s Sagarika Ghose explains why women on top tend to be so “whimsical”. “India's women politicians cultivate a designer madness, a well thought out insanity, to force their presence and personality in the brutally male-dominated world of Indian politics.”

It  actually all goes back to the Goddess. “Shakti is an unpredictable goddess. Stop being unpredictable and you lose your advantage,”  writes Ghose. There are plenty of autocratic, strong-willed, unpredictable men in power. But the women get to turn on a whim because they are specially cursed - avatars of a capricious Goddess.

It’s not that any of these stories are made up. Mayawati does carry a handbag. Didi does wear crumpled saris. Amma has her voluminous capes. Their gender plays a role though it’s debatable if they rose to power despite their sex or  cannily used their gender to their advantage. But our coverage turns them into the Da Vinci code of politics, a secret that must be “decoded”, usually in terms of harridans, handbags and hysteria.

Perhaps it’s time to give them a break. How about “making sense” of single men at the helm instead? Any magazine stories in the offing about the mysterious ties that bind between Narendra Modi, Naveen Patanaik and the newly separated Omar Abdullah?