Curious case of bureaucrats in Modi sarkar: Decoding the resignation of Goyal and Joshi

Vijaylakshami Joshi and LC Goyal, the two former secretaries in the Union government, have raised many questions after they tendered their resignation and opted for voluntary retirement.

However, the circumstances leading to the resignation of these two officers have been different.

Joshi was said to be unhappy for some time because she was not considered for the post of commerce secretary, a department where she had served as joint secretary and additional secretary from 2011 to 2014. She was later elevated to the rank of Secretary in Panchayti Raj. Following that Joshi was subsequently put incharge of PM Narendra Modi's ambitious project 'Swacch Bharat abhiyaan' in the department of drinking water and sanitation. She had three more years left before her retirement. Unlike Goyal, whose resignation was promptly accepted by the Prime Minister, Joshi’s resignation is being processed by the ministry of personnel. Both have cited persons reasons for quitting.

In Goyal’s case it’s an open secret that he was removed from one of the top most post in the Union government because he and Union Home Minister Rajnath Singh could not see eye to eye on various issues. Firstpost had earlier reported on the various circumstances that finally led to Goyal's exit. . 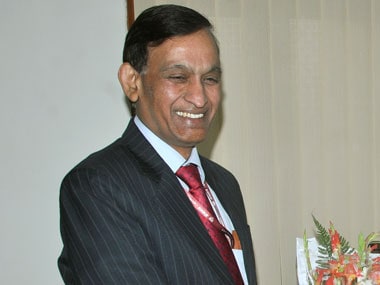 Firstpost spoke to a few bureacrats, both serving and retired, on the issue of whether appointment of third home secretary in 15 months violated the two year fixed tenure norm. The need for giving fixed tenure for home secretary, defense secretary, foreign secretary and director Intelligence Bureau, what had broadly been the norm in CBI and CVC was debated at various levels and informally considered at later stages of NDA rule but was implemented in 2005. Since then VK Duggal, GK Pillai, RK Singh, Anil Goswami, LC Goyal and the incumbent home secretary Rajiv Mehrishi have all been appointed with two year tenure norm.

RK Singh had an uneasy relationship with the then home minister Sushil Kumar Shinde and also with Anil Goswami, who was the the home secretary designate. Though Singh, now a BJP MP from Ara considered tendering resignation, in the end decided against it and superannuated on designated date.

Anil Goswami was given marching orders by the Modi government after it was found that he was trying to influence CBI investigations in Saradha scam and stall arrest of Matang Singh, a former Congress minister.

A former home secretary told Firstpost that the idea behind providing a year-fixed tenure to secretaries in north and south block ministries was rooted in the fact that by the time most secretaries got to that level, they had around one year or even less of service left before their retirement.

It takes almost 32-33 years for an IAS officer to become secretary in the government of India and those getting in these critical ministries invariably serve as secretaries in one or two other ministries. The idea was to have continuity and stability in policy planning and implementation at the bureaucratic level.

However, he added, "Though the two year tenure norm for some secretaries is there but the employer has the ultimate power to review, if a situation arises where the tenure of a secretary has to be cut short. If a situation arises, for example the case of Goswami, he has to be removed. There could be extraordinary situations where the elected government or the political leadership in the government has to exercise extraordinary power given to it. In normal circumstances, the two year tenure norm is prescribed to be adhered but nothing is written on stone."

His argument was that even though Goyal is considered to be a good officer there are facts of the case which are not known to people outside of the government. “Since Goyal, like in the case of Sujatha Singh, has chosen to resign, the full facts of the case would not be revealed by the government. At best, you will get only about 10 percent of the actual story of what transpired in ministry and at PMO."

Another senior serving officer said that the pressure is mounting on present day bureaucrats. The number of ministries and the number of officers is growing. With promotion schedule, in terms of years spent in service to getting into secretary level increasing, many officers, in fact a majority of them, who join the service late, above age of 25 wouldn’t make it. Then there are others who have to be content with secretary level rank not a secretary in regular departments of the union just because they have only one year of service left when they are promoted to this rank.

But there are some others who feel that it wrong on part of the union government to remove Goyal or any other officer who was given a fixed two year term in writing on his or her appointment to the post.

A former home secretary who retired who same norm had come in practice said: “Elected government has its primacy of place but a permanent bureaucracy was created to have continuation in policy planning and implementation. Two year fixed tenure was a step ahead. Once you created a system with due deliberation, tinkering with that in no can be taken as valid. You don’t play with systems and institutions you created as per your whims.”