Congress to set up social media depts in each state, coordinators to oversee online campaigns at each booth, Assembly segment

The Congress on Tuesday announced that all its state divisions, or Pradesh Congress Committees, will set up social media departments that will function under a designated chairperson. Each Assembly segment and booth in the country will also have social media coordinators from the party.

With this move, announced in the run-up to the 2019 Lok Sabha elections, the Congress will attempt to establish a crucial connect with people in all corners of the country, especially the young. India has close to 900 million eligible voters, and an estimated half a billion have access to the internet. The country has 300 million Facebook users and 200 million on WhatsApp, more than any other democracy. 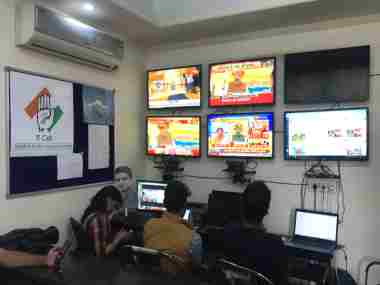 The Congress's social media department was constituted in 2017 under former MP Divya Spandana, who has over eight lakh followers on Twitter.

The party, in a circular signed by Lok Sabha MP and Congress general secretary KC Venugopal, also announced that its three national-level social media conveners will monitor the functioning of the state social media departments. The national convenors are Hasiba Amin, Ruchira Chaturvedi and Zoheb Shaikh.

In the party communication, a copy of which is with Firstpost, Venugopal lists a state social media department chairperson's role as chiefly pertaining to ensuring that the Congress' campaign activities receive traction online.

The chairperson will also be in charge of identifying one social media coordinator for each Assembly segment and one for each booth. He or she will also be responsible for training party cadre on the use of social media.

Adding emphasis to the value of a digital reach before the polls, the chairperson has also been given the responsibilities of "covering all events, rallies, online campaigns and press conferences" at the Pradesh Congress Committee level.

The Congress had used a grassroots social media connectivity effort to its advantage in the Rajasthan Assembly polls, the results of which were announced in December 2018. For Rajasthan, it had hired political strategist Naresh Arora, who had said that the online campaign attempted to strike a healthy balance between positive messages highlighting the party's vision and negative one, slamming the ruling party for its alleged inefficiency in administration.

This was similar to the strategy the party adopted in Punjab, where strategist Prashant Kishor (now a JDU member) played an important role. The party's digital campaign strategy that became popular during the Punjab Assembly elections in 2017, involved incumbent Chief Minister Amarinder Singh as the protagonist in "Coffee with Captain" and "Main Captain de naal naal".