Congress' grassroots organisation Seva Dal has landed itself in controversy for distributing a booklet during its 10-day camp, which alleged that Vinayak Damodar Savarkar had "physical relationship" with Mahatma Gandhi's assassin Nathuram Godse.

Congress Seva Dal chief Lalji Desai defended the booklet saying that the writer has written the booklet on the basis of evidence. "But that's not important for us whether he was gay or not. In our country today, everyone has a legal right to have their own preferences," Desai told ANI. 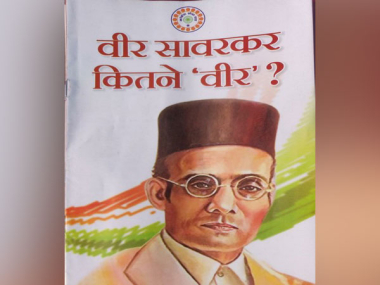 The booklet which was distributed at the camp of Congress Seva Dal. ANI

The booklet, titled Veer Savarkar Kitne Veer? gave a reference to the Freedom at Midnight book (page 423) written by Larry Collins and Dominique Lapierre, saying, “Prior to adopting Brahmacharya, there is only one mention of Godse’s physical relationship. He had a homosexual relationship with his political mentor Veer Savarkar."

According to ANI, the booklet also claimed that "Savarkar encouraged his followers to rape women from minorities and pelted stones at mosques when he was 12 years old". PTI further reported that the booklet alleged that Savarkar had "received money from the British after he was released from Andaman's Cellular Jail".

BJP hits back at Congress

Smriti Irani on Friday asked the Congress how long it would "insult the sacrifices" of Savarkar and said the Opposition party will have to give an answer to the people of Maharashtra and all patriots in the country.

"The Congress, which is one of the ruling parties in Maharashtra, will have to answer the Marathi people and all patriots in the country how long will it continue to insult the sacrifice of Veer Savarkar," Irani said at the Delhi BJP office. She also asked why does Congress consider it has the "birthright to humiliate" Savarkar.

In the second booklet — RSS aur BJP, kuchh tathya aur jankari (The RSS and the BJP, some truths and facts) — the Congress Seva Dal has claimed the organisation (the RSS) "idolised" Adolf Hitler and Mussolini.

Agrawal hit out at the Congress over the claim, stating that the RSS didn't need a certificate from a party accused of distorting information. He also pointed out that the RSS came into existence in 1925, seven years after the end of World War I and 14 years before the start of World War II.

Union Minister Giriraj Singh also slammed the Congress for alleging that Savarkar and Godse were physically involved and said that the party abuses Savarkar because they "idealise Jinnah".

"The day is not far when they [Congress] will read a book on how good a leader Jinnah was. They idealise Jinnah and that the reason why they abuse Savarkar," Singh told ANI.

Continuing his tirade against the party, the BJP minister said, "Congress has just one agenda which is to weaken the country and speak the language of Pakistan. Congress behaves the same way as Jinnah used to before 1947."

Maharashtra BJP president Chandrakant Patil said Congress should apologise for the "perverted" content in the booklet. "The booklet contains lies and perverted content. The Congress should tender an apology for the same," Patil said.

"Savarkar was acquitted by the court in the Gandhi assassination case. Despite this, the Congress-affiliated organisation is trying to link him and the accused in the case," he told PTI.

Meanwhile, Savarkar's grandson Ranjit Savarkar urged the Madhya Pradesh government to ban the Congress booklet. Ranjit asserted that a criminal case should be registered against the Congress Seva Dal as it was during their camp that the booklet was distributed.

"Congress is plotting to defame Savarkar. The party is conspiring to spread anarchy in the country by making unwarranted accusations on the freedom fighter Savarkar. The government must take an action against the Congress Seva Dal and should register a criminal case against them," said Ranjit in a press release.

Ranjit has sought action from Maharashtra chief minister Uddhav Thackeray in this matter as well. "A case should be registered under sections 120, 500, 503, 504, 505 and 506 of the Indian Penal Code (IPC) and the Madhya Pradesh Government should ban the book," he added.

Meanwhile, Akhil Bhartiya Hindu Mahasabha president Swami Chakrapani also reacted to the controversy by calling all the allegation made by the booklet as "ridiculous".

'Dirt in their mind': Shiv Sena leader on booklet

Shiv Sena leader Sanjay Raut also reacted to the pamphlet by praising Savarkar. "Veer Savarkar was a great man and will remain a great man. A section keeps talking against him. This shows the dirt in their mind," Raut said.

Sanjay Raut,Shiv Sena on a statement in Congress Seva Dal booklet 'Godse&Savarkar had a physical relationship': Veer Savarkar was a great man and will remain a great man. A section keeps talking against him,it shows the dirt in their mind,whoever they might be pic.twitter.com/Yv3aLJjraC

Just last month, Congress leader Rahul Gandhi's jibe that his name was not "Rahul Savarkar" and hence he would not seek apology (about his remark on rape) had riled the Shiv Sena, his party's new-found ally in Maharashtra.